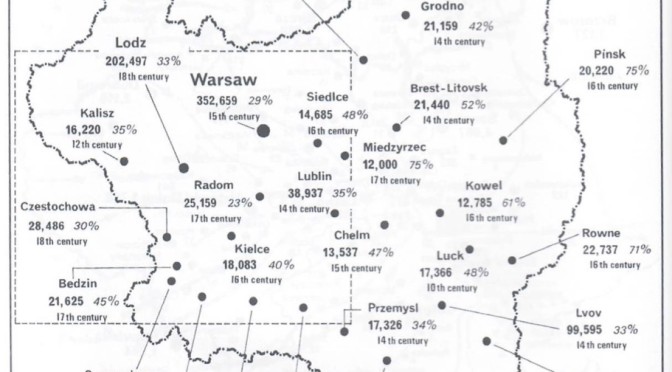 In Sir Martin’s thirteen books that chronicle the fate of Europe’s Jews during the Second World War, Poland has its rightful place at the centre of Europe, the invasion of which by German forces ignited the war. The Polish government is currently examining its place in that history and what lessons it wants to impart. In trying to criminalise the suggestion that Poles took part in atrocities against Jews, the Polish government looks to simplify Polish history by absolving some and blaming others. But the Holocaust is a story that goes beyond borders reaching into the very essence of what it means to be human. The Polish government could be setting an example of how history can be discussed, by trying to understand the choices people make when under extreme conditions.

Jews had lived in Poland for nearly a thousand years. During that time the relationship between Poland’s Jews and her Christians varied with the moods of government, the Church, the local economies and the many invaders who swept through. The German invasion of 1939 destroyed that fragile dynamic through the Nazi strategy of divide and conquer. In every land Germany occupied, including Poland, they were able to take advantage of age-old differences and stoke entrenched fears and mistrust. Within a climate of tyranny and war, survival creates strange alliances; evil and altruism come in infinite variations.

History is complex. It is dependent on chronology – what did people know at that moment? It is dependent on context – what was going on around them? The discussion of History is also dependent on archival evidence, on balanced judgements, on the recognition that very rarely are there easy answers. More can be gained from studying it – the good, the bad, the ugly – and recognising that those who were caught up in it were human. More can be gained from recognising that some actions, some attitudes, some alliances are more beneficial to human life than others. More can be gained by a government recognising that it’s citizens were humans acting under unimaginable conditions, than can be gained by the short-term but dangerous accusation of blame or victimhood. When a government seeks to divide, it is a warning sign that it feels it must have something to conquer. 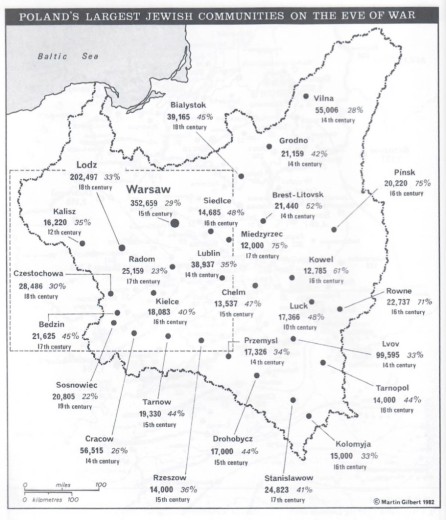 Poland cities with 12,000 or more Jewish inhabitants at the time of the 1931 census, also showing the percentage of Jews among the total population of the towns.

The Polish government has an opportunity now to teach an example of how humans reacted under inhuman conditions, of how all human beings can learn from history and not repeat the patterns of destruction that stem from fear and hatred. In an increasingly polarised world, the Polish government can lead by example, not by increasing polarisation with blame, but by recognising that responsibility lies with the individual and the government institutions that educated and created the options open to that individual.

Poland’s opportunity is but one example in our world today that Nazi Germany’s strategy of divide and conquer must not be the legacy of that war. The war that began with an invasion on Polish soil can offer an opportunity for a sovereign nation to set an example by examining its own past with honesty and healing. The Polish government must ensure that its history explores the spectrum of human behaviour, and not be used as a tool for blame and absolution. If “law and justice” are qualities that this Polish government represents, then the freedom to explore Poland’s past in all its nuance must be allowed and protected, encouraged and modelled. In this, Poland can set a much-needed example.

Atlas of the Holocaust