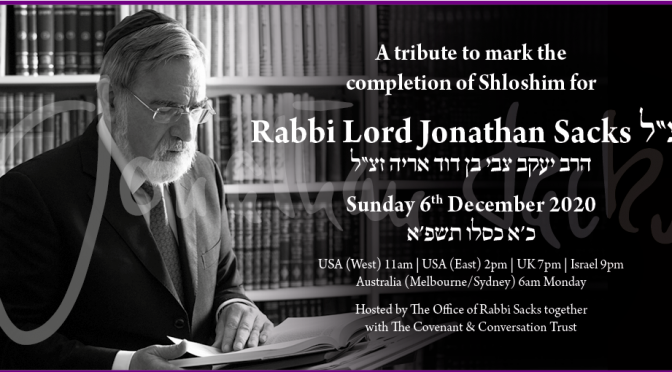 Photo: Information to join the memorial for the late Rabbi Jonathan Sacks

I was sitting by the window which overlooks the Rocky Mountains above Canmore, Alberta when I received a call from a friend that Jonathan Sacks had died. Former Chief Rabbi of the United Hebrew Congregations of Great Britain and the Commonwealth, Member of the British House of Lords Baron Sacks of Aldgate, scholar, teacher, friend. Tears came before words could be formed let alone uttered. The mind freezes, the heart pounds, silence reigns. The tears come, and then slowly, the breathing returns.

Like Martin, Jonathan Sacks left a great legacy, a wealth of scholarship in his published books, erudition articulated in his many videos, scholars and rabbis who he mentored, and legions of devotees.  A serious scholar before becoming a rabbi, Rabbi Sacks wove religion, philosophy, and secular studies together, and he made it all approachable in real, not ethereal, terms. Like Martin, Rabbi Sacks connected people, and tears have been shed not only by those who knew him well, but in many who had only known him – as they knew Martin – from his writing.

Being with Martin for the years we had together, I was privileged to meet “the great and the good”. Martin had known Sacks for many years. They had their differences of opinion, but that never overshadowed the great respect they had for each other. When Martin decided that we would join Highgate Shul, one of the United Synagogues of which Sacks was then the Chief Rabbi, and in which Martin had grown up, it was to Sacks that Martin wrote to say “I’m back”. Highgate’s Rabbi Nicky Liss, a devotee of both men, who brought the two together on numerous occasions. Among many others, I was the beneficiary of those meetings.

Rabbi Sacks spoke at the memorial for Martin in London. He spoke about Martin as a historian, as a Jewish historian and how history is “a profoundly Jewish vocation” because it was Jews who saw God “in history, not just in nature”. He described Martin as “A man of truth who recorded the facts and then let them speak for themselves.” He ended his remarks quoting the ancient rabbis who said, “we don’t make monuments for those who have died. Their words are their memorial.”

At a memorial for Rabbi Sacks zoomed from Highgate Synagogue, Rabbi Liss quoted words Rabbi Sacks had written for another but which fit Rabbi Sacks so well: “He lived his life on a high flame which burned out all too soon, but he lit the flame of love for learning in many hearts and his legacy endures. Wherever and whenever one of us who heard him and was inspired by him teaches Torah to others, his spirit is alive among us and his memory remains a blessing. We who were privileged to know him will always cherish that memory and be lifted by it.”

Rabbi Sacks left an invaluable and immortal memorial in his words which will be our guide, and guide to many generations to come. May his memory be for a blessing. For us all.

Click here to watch Martin’s memorial (scroll down to the video, Rabbi Liss introduces Rabbi Sacks at about 25.20 minutes in)

To learn more about Rabbi Sacks, explore his website rabbisacks.org