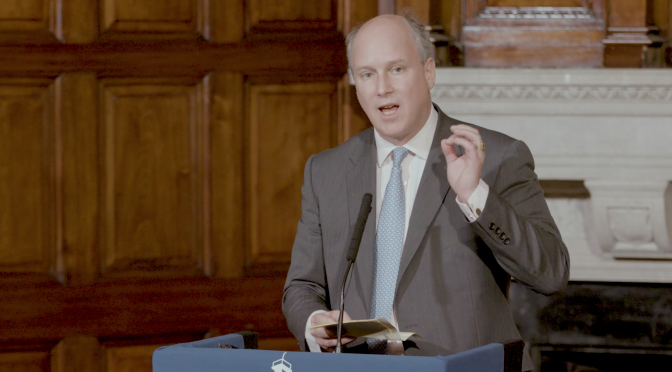 Editor’s Note: On June 14, Hillsdale College, the publishers of the official multi-volume Churchill biography, announced, at a gala dinner in London, the completion of the final document volumes, bringing the biography to 8 volumes of Churchill’s life, and 23 volumes of accompanying documents. Randolph Churchill, Churchill’s great-grandson, spoke to mark this occasion:

“My Lords, Ladies, and Gentlemen. I cannot tell you how delighted I am to be speaking to you at this celebration dinner for the completion of the Official Biography. The fact that we celebrate this alongside the 75th anniversary of those remarkable D-Day landings, which represent in my view the most important event in our strategic military history, makes this occasion even more special.

“Without doubt, the outcome of those landings ensured the survival of the freedoms and liberties we so cherish today. The Official Biography, now complete, tracks the career of the historical figure who led their defenders in their most dangerous hours.

“Here we are this evening gathered in the epicenter of all the places that were so important to Sir Winston Churchill. We have the Admiralty. We have The War Office, where he famously took to the balcony to greet the crowds. We have the Cabinet War Rooms, the ‘last redoubt’ if the invader came. And we have Downing Street, which played such an important part in his life.

“Next door at Number 11 is where he lived as Chancellor of the Exchequer. It is well-known that Churchill’s time at the Treasury was challenging. Whilst there he said: ‘I wish financiers were admirals or generals. I can sink them if necessary. But when I am talking to bankers and economists, after a while they begin to talk Persian, and then they sink me instead.’

“Many of you have visited Chartwell, Churchill’s home in Kent. The Churchill family is thrilled that, with the dedicated help of over 400 volunteers, Chartwell is so loved and cared for. It warms us to see it being more popular than ever. It is wonderful to see all the personal reminiscences and family effects that were there when it was my great-grandparents’ home, and to see how beloved it still is today. Outside Clementine Churchill’s bedroom at Chartwell, used to hang—the original is now at the Churchill Archives—one of the most remarkable letters in history.

“Cast your mind back to 27 January 1941. The United Kingdom, under Churchill’s leadership, has survived the Battle of Britain and the Blitz. Yet the situation is precarious. The Battle of the Atlantic has not been won. Europe is dominated by Nazi Germany. The Luftwaffe is bombing British cities. The Soviet Union is still bound to Germany by the infamous Molotov-Ribbentrop Pact. The United States is neutral and not yet committed to the Lend-Lease programme.

“Imagine then the psychological effect of the delivery of a certain letter to the Prime Minister. It had been written by hand, by Franklin Delano Roosevelt, just seven days earlier on 20 January 1941—the first day of his unprecedented third term as President of the United States.

“Roosevelt had asked his former opposing Republican candidate, Wendell Willkie, to deliver this letter by hand to Churchill in London. The letter reads:

Wendell Willkie will give you this. He is truly helping to keep politics out over here. I think this verse applies to you people as it does to us:

Sail on, o ship of state!
Sail on o Union strong and great.
Humanity with all its fears,
With all the hope of future years
Is hanging breathless on thy fate

As ever yours,
Franklin D. Roosevelt

“For Churchill and Britain, standing alone, this extraordinary letter, reciting the Longfellow verse, gave real hope that in the heart of your capital, Roosevelt was going to turn the tide of isolationism and come to support the Old World. This remarkable letter encouraged Churchill to speak to the American people in a rousing broadcast in which he ended: ‘Give us the tools and we will finish the job.’

“I have had the privilege of just returning from Normandy, where it was deeply moving to meet the brave veterans who are an extraordinary link to that dark era. Their courage will never be forgotten.

“I would like to repeat a few words of President Ronald Reagan’s when he visited Normandy on the 40th Anniversary of D-Day on 6 June 1984. He was speaking at the top of the cliff of Pointe du Hoc, where so many American lives were lost. The President said:

There are no more important documents for freedom and liberty than Magna Carta in 1215 and the Declaration of Independence in 1776. Churchill deliberately linked them in his last great multi-volume work: A History of the English-Speaking Peoples. It is strange to think that, without the birth of Jennie Jerome in Brooklyn, the shrines of our hard-earned freedoms might still have been trampled underfoot by Nazism, and that we might still be living in ‘the abyss of a new dark age.’

“All of you here tonight from Hillsdale have played your part in helping us preserve liberty. It is truly uplifting that through your dedication and support for completing the Churchill biography, it will stand as one of the great works of history, recording the truth faithfully and without judgement. Started by my grandfather, Randolph, it was taken on bravely by Martin Gilbert and his dedicated supporters, including his wife Susan and his widow, Lady Gilbert. It was the latter who found this wonderful letter by Martin to Isaiah Berlin, just after he began his work as official biographer:

Today is also the first anniversary of Randolph’s death and I am on my way this morning to his grave. It has not been easy taking up his work. But now that I have begun the actual writing of Volume III, which covers the First World War, I feel a new upsurge of energy and inspiration. When I began to work for him, I felt a great deal of fear mingled with a certain amount of awe; after six years the fear had been replaced by admiration and the awe by affection. And then he was gone: and neither the honour of having been chosen to carry on his work nor the excitement, variety and interest of the work itself can ever obliterate the pain of his departure.

“And now Martin his gone, but his work was taken up finally by Larry Arnn and his wife Penny. All of them, from Randolph on, have played a role in preserving the history of those extraordinary years in these thirty-one magnificent volumes. Their work will be used forever by those who seek the truth—and that sits very tightly with the Hillsdale legacy and reputation for upholding the U.S. Constitution.

“Larry Arnn, Soren Geiger, Richard Langworth, the Churchill Fellows, and your dedicated supporters at Hillsdale, the Churchill family are deeply indebted to you for finishing the job. There have been very many people who have played their part in supporting this project and if it was not for the generosity and time of Martin Gilbert and Larry Arnn, together with Laurence Geller and the late Wendy Reves, this undertaking may never have been completed.

“There is still so much to be learnt from Churchill and this is now portrayed by various mediums. The film Darkest Hour was simply extraordinary, with Gary Oldman’s and Kristin Scott Thomas’s portrayal of Winston and Clementine. Then last year we were graced with the pièce de resistance. It is only right and proper that we salute one of your fellows, Andrew Roberts, for his magisterial biography Churchill: Walking with Destiny. Once again, on behalf of the Churchill family, I would like to thank you all for playing your part in honouring my great-grandfather’s memory by completing ‘The Great Biography.’ It is a monumental achievement of ‘Blenheimian’ proportions which underpins all Churchill scholarship. It will take his life and legacy to future generations.

“I will end my remarks with a tribute that my great-grandfather gave. I quote Sir Winston’s words at the unveiling of the Royal Navy Memorial in Horse Guards, just across the road from here, in April 1925. It is another remark ‘that applies to you people as it does to us’:

We are often tempted to ask ourselves what we have gained by the enormous sacrifice made by        those to whom this memorial is erected. But this was never the issue with those who marched away. No question of advantage presented itself to their minds….They only saw the light shining clear on the path of duty. They never asked the question, ‘What shall we gain?’ They only asked the question, ‘Where lies the right?’ It is thus that they marched away forever.

“Let us honour the brave men and women who saved our freedoms, and particularly those who serve our nation so bravely today. I would now like to propose a toast:

“’To Hillsdale College and to the memory of Sir Martin Gilbert’”