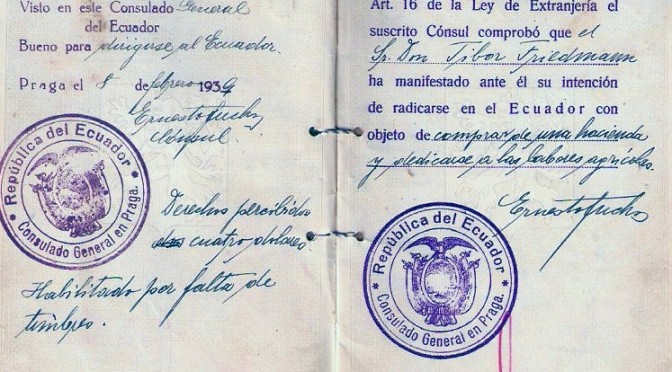 Photo: The visa signed by the Ecuadorean diplomat Ernesto Fuchs in Prague on 8 February 1939 for Mr Tibor Friedmann. Photo courtesy of Alberto Dorfzaun.

Some names are known; some lie buried in forgotten archives. Many, knowing they were operating against their government’s orders destroyed evidence of their work. Many more were censured by their governments for not following orders. No one really knew. No one, except those who were saved.

June 20 this year marked the 50th anniversary of the 1951 United Nations Convention Relating to the Status of Refugees, which followed on from the 1948 UN Declaration of Human Rights. These statutes are meant to guarantee the rights of people to live in peace and security either in their own country, or to be allowed to find refuge in other countries. The sheer number of millions of displaced people in Europe after the Second World War necessitated these laws which recognised the rights of those who had survived trauma and displacement of war and poverty and hatreds. In 1967 the Convention was amended to include worldwide refugees, not only those in Europe, most of whom had been resettled in new circumstances by 1967.

The damage inflicted on traumatised people displaced by war and poverty and oppressive governments cannot be underestimated. Do they not deserve the freedom to be able to live in peace and security, either in their own countries or elsewhere? Yet the numbers of refugees has nearly doubled in the last 50 years. In most cases refugees bring a work ethic and energy to their new societies and increase the economic landscape – as opposed to the perception they will be a burden on it.

In preparation for my July 1st talk I researched diplomats who went out of their way to assist Jews desperate to escape what became a continent-wide hunt for their destruction before and during the Second World War. It was consular staff who had the power to give people visas, some real, some spurious, which were used either to escape Europe or to claim citizenship of a neutral country that offered protection after the war began and the borders were sealed. These diplomats did it because they recognised a need even if their governments forbade such actions. They did not do it for fame or glory and most lived post-war lives in obscurity at best, and in poverty at worst because of their deeds. But they understood that people do not leave their homes and their communities out of choice. They become refugees in order to survive: they are forced to flee with their lives.

The tiny country of Ecuador, tucked away on the northwest coast of South America, became a refuge for Jews trying to escape Europe. Ernesto Fuchs, the Honourary Consul in Prague before the war gave visas to Czech Jews desperate to leave. The Consul in Bremen, José Ignacio Burbano and the Vice-Consul in Trieste, José Morpurgho, both issued Ecuadorean visas. In all up to 5,000 Jews made their way to Quito where they recreated their lives and brought European culture and patisserie to the Ecuadorean palate. During the war, the Ecuadorean Honourary Consul in Stockholm, Manuel Antonio Muňoz Borrero, gave out blank Ecuadorean passports to stateless Jews imprisoned in transit and concentration camps in occupied Europe. These passports kept them from being deported to their deaths. The passports were smuggled in, personal information added, and lives were saved.

Before the German invasion of the Soviet-occupied borderlands in 1941, diplomats in Lithuania issued visas to help Jews escape east across Russia and through Japan. L.P.J. de Decker, the Dutch Ambassador in Riga, Latvia, authorized the Honourary Dutch Consul in Kovno, now the Lithuanian city of Kaunas, Jan Zwartendijk to issue an official stamp to the effect that no visa was required for Curaçao, a Dutch colony in the Caribbean. Both knew that entry was dependent on the discretion of the Governor of Curaçao to allow Jews in, and he had no intention of doing so. But with that stamp, the Japanese Consul Chiune Sugihara in Kovno could write transit visas through Japan so Jews could escape. No Jews in fact went to Curaçao. The Polish Ambassador in Tokyo, Tadeusz Romer, managed to help many get visas for North and South American countries. Sir Thomas Preston, the British representative in Kovno issued 1,200 Palestine certificates for Jews to escape to British Mandate Palestine.

Per Anger was in the Swedish Legation in Budapest when it was occupied by Germany in 1944. He worked closely with Raoul Wallenberg who had come to Budapest to keep the Jews there safe from the deportations that had taken their fellow Hungarian Jews in most cases to their deaths. In his memoir of that time, Anger writes about how the Jews who had received Swedish passports joked how they didn’t “look” Swedish. Consular staff from Spain, Portugal, Switzerland, Sweden and the Vatican along with Churchmen and individuals combined efforts to save Jews, first from deportation and then from the antisemitic Arrow Cross thugs who captured and murdered many. An “International Ghetto” was set up which contrasted the ghettos the Germans had established for imprisonment and death. The Budapest International Ghetto was made up of safe houses where Jews would be unmolested, and was overseen and protected by the diplomats. It was a community diplomatic endeavour which saved the last Hungarian Jewish community from extinction.

Each country has a process for immigration and would-be immigrants must respect and submit to that process. But a sense of humanity must also be part of the equation. The longer people – and children – are forced to live in traumatic situations, the longer it will take them to regain their equilibrium, and the trauma continues, generation to generation. These diplomats have been in most cases honoured, now 80 years after their life-saving efforts. We recognise they did the right thing. Have we learned nothing?

I am grateful to Alberto Dorfzaun and Eva Zelig for the information on Ecuador, and to Arlette Stuip for information on Jan Zwartendijk, L.P.J. de Decker, and Tadeusz Romer.