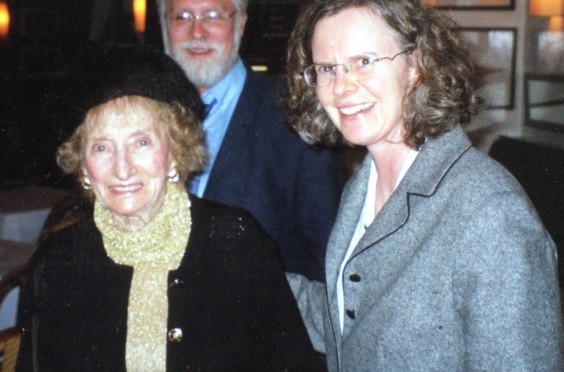 It was 2004 and I was in New York for the launch of my Holocaust Memoir Digest, which the Hidden Child Foundation kindly offered to host at their headquarters at the Anti-Defamation League. Martin was to introduce me and he got up to address the seated throng. Out of the corner of his eye, he spotted a latecomer and he announced: “Ladies and Gentlemen, the greatest living Jewish journalist of the Twentieth Century.”

All eyes turned to the door in great expectation and a tiny, elderly lady with flaming red hair made her way in, almost more confused by the attention than the audience with their surprise. It was Ruth Gruber, indeed a living legend who with her camera and typewriter had recorded the high and low-lights of the Twentieth Century.

Born in Brooklyn, Ruth Gruber was the youngest person to receive a PhD, which she did at the University of Cologne, at the age of 20, and was a witness to the rise of Nazism. She returned to the US and became a journalist in 1932 and was the first foreign correspondent to fly to the Soviet Arctic and report on the Soviet Gulag. During the Second World war, the Secretary of the Interior, Harold Ickes made her his Special Assistant and in 1944 she was instrumental in bringing a thousand Jewish refugees to Oswego, New York, where she lobbied to allow them to stay – they were the only Jewish refugees allowed in to the US during the Second World War. Ruth was in Haifa harbour when the refugee ship the Exodus tried to dock and she was the only journalist to be allowed to accompany the Jewish survivors back to Germany. In 1985 she visited Jewish villages in Ethiopia, and wrote about them. Her pen and her camera were always at work – and we are the beneficiaries.

Several years later, on one of Ruth’s visits to London, she visited us at home, with her daughter Celia. Having read her books, I was a bit more familiar with her extraordinary life, and still in thrall of her accomplishments and her tenacity to life. So it was very sad when I heard of her death on November 17, 105 years young.

Ruth Gruber witnessed history, recorded it, and had been a force to alter the course of it, as a woman and as a humanitarian. A tiny, powerful, self-effacing woman whose voice and strength will continue to be a beacon to the oppressed and an inspiration of what hard work and determination can do.

Top photo: Ruth Gruber and Professor David Patterson with me, May 2004, New York.