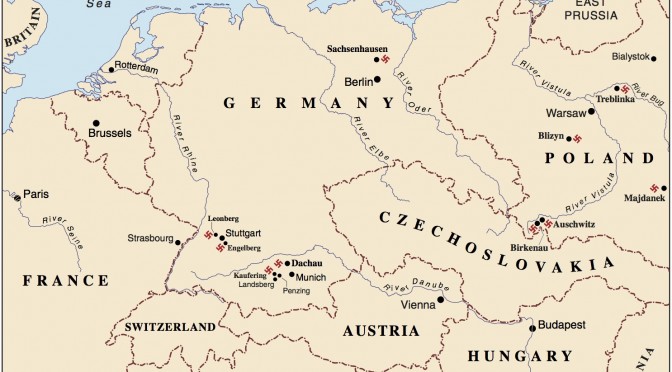 In 2000, Martin and I attended the Remembering for the Future Conference in Oxford, organised by the late Elisabeth Maxwell. Martin gave an opening address; Samuel Pisar’s talk followed. Pisar, an international lawyer in Paris, spoke about the deportation of the Jews in France. Three years later Vallentine Mitchell published the first volume of my Holocaust Memoir Digest which has excerpts from published Holocaust survivor memoirs. Samuel Pisar’s own memoir Of Blood and Hope is included in it.

Pisar’s memoir was published in 1979 when he was 50. (He died in 2015, aged 86.) He was born in Bialystok, then part of Poland, but as it had been part of Czarist Russia, the region came under Soviet occupation following the Ribbontrop-Molotov Nazi-Soviet Non-Aggression Pact of August 1939. Then on 22 June 1941 the Germans invaded, a ghetto was established and Samuel, aged 12 found himself in an “atmosphere of absolute terror”. On 15 September 1943 the ghetto was liquidated and those few survivors who remained were deported, the men, and the women and children in different rail cars.

Pisar’s mother, by then widowed, decided to dress her son, at 14, in long pants so he could go with the men. She and her young daughter Frieda go with the women. Their cars were emptied at Treblinka. Pisar writes: “Some time would pass before I learned … that that women and children whose cars had been unhooked from our train at Treblinka were taken straight into the ovens.” Samuel, with the men, continue on to Majdanek.

As the Germans needed tailors, young Samuel claimed he made buttonholes: “The irresistible logic of my explanation – that whenever tailors are needed, buttonhole makers are needed too – must have impressed the SS officer, because he waved me to one side, the side of life. … Joseph becomes an interpreter of dreams and wins his life. He has invented his buttonhole machine.” From Majdanek, Samuel is taken to the slave labour camp at Blyzn, and then to Auschwitz-Birkenau.

In Birkenau he again survived on his wits and on luck. Selected to be among those to be killed in a gas chamber, he found a pail and scrub brush left there by one of the Sonderkommando members who cleaned the gas chamber after an earlier group had been killed. Samuel took the pail and brush: “I go over one section, then another, scrubbing and drying vigorously as hard as I can, like a good worker performing an assigned task. Slowly I inch my way toward the exit. …Carrying the pail, with the brush and rag inside, I walk slowly to the door, then out into the open. …With slow, measured steps I walk toward the other barracks and lose myself in the anonymity of the camp.”

In the autumn of 1944, Samuel and his two friends Niko and Ben are taken with other prisoners out of Auschwitz, to slave labour and concentration camps in Germany. They were liberated the following spring when the three escape from a death march. Eventually they saw an American tank and Samuel writes: “I was in front of the tank, waving my arms. The hatch opened. A big black man climbed out, swearing unintelligibly at me. Recalling the only English I knew, those words my mother had sighed while dreaming of our deliverance, I fell at the black man’s feet, threw my arms around his legs and yelled at the top of my lungs: ‘God Bless America!’ ”

Liberation brought pent-up anger and destruction until an aunt found him and brought him to Paris, and uncles in Australia brought him there to finish his education: “My mind soaked up knowledge like a dehydrated sponge. … Physically I had escaped, I was breathing, but Hitler had programmed my mental and moral destruction from his grave. The struggle for survival was going on once more, survival through study. It had to be waged with the same determination, the same fury.” Pisar later earned a doctorate at Harvard and the Sorbonne, and had a distinguished career as an international lawyer and adviser to presidents.

Pisar writes: “my life” does not “belong entirely to me. It remains rooted forever in the tragedies of the past and it is from these tragedies that it must draw its meaning and direction.”

In January, Samuel Pisar’s step-son became the United States Secretary of State. Antony Blinken carries with him a deep insight into both the tragedies that his step-father endured, and the perspective of Pisar’s political experiences.