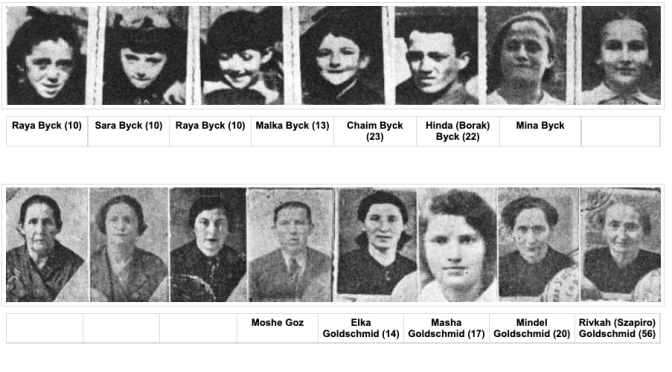 Photo: Part of one of the 32 pages of photos of those killed on 27 August 1942, or 14 Elul 5702 on the Hebrew calendar, corresponding to 10 September 2022, the 80th Yahrzeit, or anniversary of the destruction of Sarny’s Jewish community.

If a picture is worth a thousand words, how many words are needed for a thousand pictures when, in some cases, the face staring out is the only remnant of a life?

On a hot August day, thousands of people were moved from where they had been incarcerated to an enclosed camp in a poor part of town.  There, in small groups, they were taken to the forest where they were machine gunned to death.  Ten thousand people from the local town of Sarny and a few surrounding towns and villages.  Why?  They were Jews.  They had lived under a brutal German occupation for thirteen months where they had been impoverished, starved, beaten and brutalised.  Then, when they had nothing left that could be taken from them, they were killed.

A very few managed to escape the massacre and hide in the forests nearby.  When the area was liberated eleven months later, the survivors returned to their little town.  Within a few years most emigrated to Israel where they again fought against invading armies, but this time to create their own state.  Some fell in that fighting.  The survivors came together to reminisce about their hometown, to memorialise those who had been killed, to write and record their memories of their town, its history, its vibrancy, and its people and what they had added to the town.  They created a Yizkor book, a memory and a memorial.

Jewish survivors throughout what had been German-occupied or controlled Europe, created these Yizkor books to remember their communities, their families and friends, their lives and the deaths of their martyred people.  The Sarny Yizkor book is but one of thousands of such books.  Most, written in Yiddish and Hebrew, were published in the early 1960s by Yad Vashem in Jerusalem.

JewishGen has begun a project of translating these Yizkor books into English and making them available online.  They contain a wealth of information for genealogists, historians, and those interested in what life was like in the 19th and 20th centuries in Europe.  The Yizkor book from Sarny, in what is now northwest Ukraine, has just been finished; the complete book is online.

Included in this particular Yizkor book are 30 pages of passport photos, 1856 faces, nearly 800 of them without any sort of identification.  Among the photos named is my grandmother, Esther Chaya Szapiro, her sister-in-law Rivkah Goldschmidt and Rivkah’s three daughters; and two little girls, aged 10, named Raya Byck who were cousins to each other, and distant cousins to me.  More than 10,000 were killed.  The photo faces give a sense of a life, a town, a community, and what was destroyed.

We speak of the six million killed:  the hundreds of thousands in the death camps, the hundreds of thousands shot in forests and ravines, the innumerable who fell from starvation, disease, brutality who have no known grave, the aborted and the newborns who were not allowed a chance at life and whose survival would have meant the murder of the mother.  What do these numbers mean?  Take a look at the faces, page after page after page, and these only from one small town, and a fraction of the residents at that.