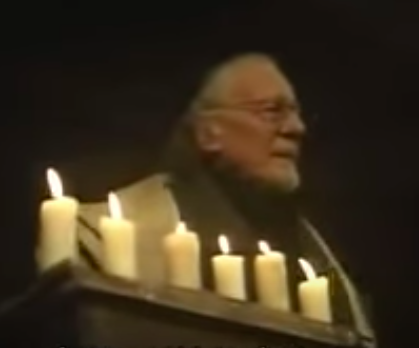 How do we comprehend senseless evil?  How do we respond when words lead to violence and to murder?  (And with all the advances mankind has created to make life better, why is there even still evil in the world?)

Recently, on a friend’s suggestion, I watched Herman Wouk’s epic series, The Winds of War, and War and Remembrance based on his books of the same names, now being screened on YouTube.  It is basically the story of an American family navigating the Second World War, both the war in Europe, and in the Pacific where Herman Wouk served in the US Navy.

Martin and Herman had a friendship based on mutual respect for what each had done with pen and paper.  I don’t know when this friendship began; I believe it came from the time when Wouk was researching his books, or subsequently.  Martin took me to meet Herman, in his home in Palm Springs.  He was then nearing 90 and working on his final book which was published to coincide with his 100th birthday.

Aaron Jastrow, played by the magnificent John Gielgud, has been deported to Theresienstadt.  A noted professor of early Christianity, he has turned from his Jewish, and American, roots to embrace Christian scholarly work in Italy.  And then the war sets in, and slowly and imperceptibly his freedom is whittled away.  Being a respected individual at Theresienstadt he is forced by the Germans to be part of the Jewish Council who must, among their other horrible “duties”, choose those to be deported “to the East” which we know will be to Auschwitz, to their deaths.

The scene is in Aaron’s evening class the night before his deportation is to leave.  Six candles light up his podium, an editorial touch perhaps symbolising the six candles lit at Yom Hashoah commemorations around the world to remember the six million Jews murdered during the Holocaust, that Aaron and his people are facing.

How can Aaron address his students, his friends, whose hours he knows are short?  What can he possibly tell them?  Aaron chooses the story of Job, a connection that I have heard described brilliantly by the late scholar Maureen Kendler at a talk where I couldn’t, unfortunately, take notes.  Apparently someone else felt this particular clip of Aaron Jastrow’s speech is well worth standing on its own and has made it available to us on YouTube (link below).  It is well worth the 8 minutes of your day to watch.  As Aaron says, it is not an answer, but it is an answer.

The “senseless evil” is embodied in Wouk’s Hitler.  Watching this series now, 36 years after it was first broadcast, it is amazing how history appears to be so similar.  Change the accent from German to Russian and the parallels with today are striking.  How many people have to die before we can stop senseless evil and keep it from it spreading?  What will it take?

In 2010, Martin wrote to Herman to thank him for sending his latest book.  Martin wrote:  “Rereading Aaron Jastrow’s Theresienstadt sermon made me go as cold now as when I read it all those years ago.”