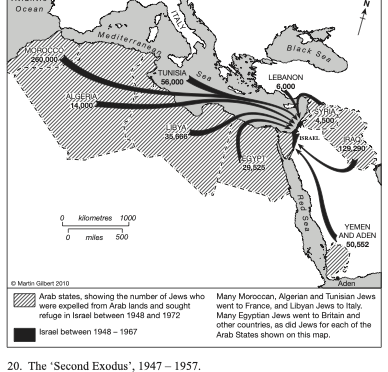 Photo:  Jewish refugees from Muslim lands who came to Israel, 1947 to 1957, map from In Ishmael’s House

A little knowledge never stopped anyone from making assumptions.  The assumption becomes accepted, then entrenched.  I was reminded of this in an article in The Times about a therapist, Dr Galit Atlas, who works with people who have gone through generational trauma, and how that trauma affects their relationships, emotionally and physically.  This is how the author of the piece describes Dr Atlas’s own background in trauma:

“She was born in Israel after her Jewish parents emigrated there when they were young (her father, Yaakov, from Iran, her mother, Shoshi, from Syria). She grew up in the shadow of the Holocaust ….”

Is there a connection?  It seems the one thing that everyone, regardless of their politics and views about Israel, can agree on is that the Holocaust cast a dark shadow.  Maybe mentioning the Holocaust makes an article about an Israeli “safe”?  Dr Atlas lives now in New York.  The United States has nearly the same Jewish population as does Israel.  Would the Holocaust and its “shadow” be the characterisation of growing up Jewish in the United States?

Dr Galit’s “Jewish” parents came to Israel from Muslim countries, her father from Iran and her mother from Syria.  Their connection to the Holocaust was tenuous at best.  The trauma that was transferred to their child came from their own first-hand experiences in Iran, in Syria, that led them and their families to flee, leaving homes and businesses, livelihoods and lives.  They were among the 850,000 Jews living in Muslim lands who were forced to flee when Israel was established.  They didn’t “emigrate,” they were refugees who had been targetted for being Jews.  And as Jews they were able to come to Israel, to live freely as Jews without fear.  They came not to languish in refugee camps but to opportunities to rebuild their lives and their families, to educate their children, to add to society and to the world.  (For more on this story, see Martin’s In Ishmael’s House, A History of Jews in Muslim Lands.)

Israel is a country of traumatised peoples, whether they came from Europe before or after the Second World War, whether they came from Muslim lands where they were hounded out, and where they still live under the constant threat of terrorism, not least the four deadly attacks in the last few weeks.  Israel is also a country of traumatised minorities, in a region where much of the leadership, mired in corruption, promotes terrorism and jihad against Jews, rather than helping their own people.

For the Jewish survivors who came to build their lives in new countries, the Holocaust – even in Israel – was on few people’s radar for nearly a generation.  Dr Atlas grew up in the shadow of the Holocaust, as did many Jews.  For most though, it was a very light shadow.  That the author of the article chose to connect the experiences of her parents with the “shadow of the Holocaust” is unfair both to the parents who “emigrated” and to Holocaust survivors.

Maybe the author did not know the history of Jews who were forced to flee from Iran and Syria, from Morocco, Algeria, Tunisia, Libya, Egypt, Yemen and Aden, Iraq, and Lebanon when Israel was established?  Or is that the Holocaust is used as a way to write about an Israeli in a world where even the mention of “Israel” stirs up emotions not always helpful to the discussion?

This May Jews in Israel and many around the world will celebrate three holidays associated with the establishment of the State of Israel in 1948, a state that continues to welcome Jews home.  Yom HaZikaron, the Day of Remembrance, Memorial Day, (this year on May 4th) honours those who gave their lives in the struggle for Israel’s survival, beginning with the War for Independence that began when five neighbouring Arab nations invaded Israel the day after independence was declared.  Soldiers who fell then and in each of the following wars, and those killed in terror attacks are honoured both nationally and in each neighbourhood throughout the country.

Yom HaZikaron is followed the next day by the holiday to celebrate the establishment of the state, Yom HaAtzmaut, Israel Independence Day, (originally 14 May 1948, this year on the Jewish calendar, May 5th) which is met with joy.  After 2000 years of exile, Jews are again living freely in their own home, the connection to which has never left them throughout the years of wandering.  From tears of grief to tears of joy.

In 1967, during the June Six Day War, Israeli troops fought their way into the Old City of Jerusalem.  After 1948, Jerusalem had been divided between the Israeli side and that occupied by Jordan.  Jews had no access to their holiest site, the Temple Mount where the First and Second Temples had stood.  Jews had no access even the remains of those Temples, a retaining wall known as the Western or Wailing Wall.  In 1967, Jerusalem was reconquered and united, celebrated since then as Yom Yerushalayim, Jerusalem Day (this year on May 29th).  The Old City now consists of four quarters:  Armenian, Christian, Jewish, and the Muslim quarter.   Though controlled by Israel for security, the Temple Mount itself is managed by the Jerusalem Islamic Waqf and non-Muslims are not allowed to pray there.

Israel’s history, like every other country, is nuanced.  Because Israel – and Jerusalem – is the spiritual home of Judaism, Christianity and Islam, many are drawn to it.  But there is more to its history and its people than the shadow of the Holocaust, and the social and political stresses of the region, and much to learn from the people and the successes of this tiny, “old/new” country.

Read: The Atlas of Jerusalem