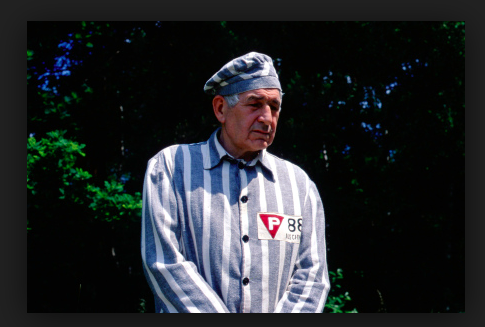 On 14 June 1940 Sigmund Sobolewski was on the first transport taken to Auschwitz. He volunteered to go instead of his father, a Polish Catholic anti-Nazi, who had been ill. Thus at 17 Sigmund became Number 88. He survived in Auschwitz for nearly its whole existence as a death camp. Because he knew German, Sigmund became a translator, and then was part of the fire brigade that was called on 7 October 1944 to put out the flames at Crematorium IV when it was blown up by the camp resistance. After the war Sigmund emigrated to Cuba where he married, and then he and his wife made their home in Canada, in Toronto and then in Alberta.

I first saw Sigmund in the late 1980s in Edmonton, Alberta, where I was living, and had been involved with Holocaust commemorations. The annual Yom Hashoah commemoration was in fact two programmes, one in a local synagogue (rotated year to year so that each of the three synagogues had an opportunity to host it), and one at the cenotaph at the local Jewish cemetery. For a number of years a gentleman in the striped uniform of Auschwitz stood quietly at the back of the gathering at the cemetery, paying his respects. To say that this apparition made the survivors uncomfortable is an understatement, but at some point I got to know Sigmund, and marvel at the depth of his pain and how he used it to fight – single-handedly – against injustice and hate and the distortion of history.

In his striped Auschwitz uniform with the number 88 sewn onto it, Sigmund would stand up to those who denied the Holocaust, those who burnt crosses, those who glorified Nazis and white supremacy, and in those days, Alberta had its share. Often his Auschwitz uniform would attract a local news crew who would accompany him when he went to speak to neo-Nazis. Sigmund was soft-spoken but he had a powerful message and he delivered it in a low voice full of passion and with the tone of authenticity and experience. 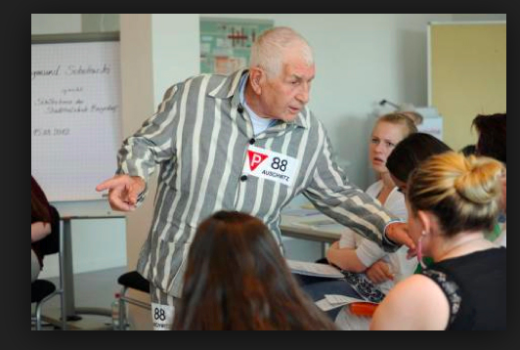 Sigmund created the Auschwitz Awareness Society, and with no funding and a fax machine, he attacked Polish Catholics who did not take responsibility fifty years on for the post-war murder of Jews in Kielce in 1946; he attacked the Roman Catholic Church which had taken over a former administration building in Auschwitz and converted it to a church complete with three large crosses; and he was very involved with how Auschwitz should be maintained, its gates opened to visitors. If the grounds of Auschwitz are now “user-friendly” it is in no small measure due to Sigmund Sobolewski. Those who visit it today owe him a debt of gratitude for encouraging the organisers to maintain it as a museum, as a sacred space and one that should be accessible to groups whose lives will have been changed by having been there. It was Sigmund’s involvement, along with others, that set the tone of what it is today.

In a world that is increasingly polarised, permeated with extremism, where hate seems to be seeping out of our nationalists’ pores, where the divide between “us” and “them” is marked by police in riot gear, we ask ourselves what one person can do to make a difference. Sigmund’s example, Sigmund’s challenge to us is this: Take responsibility. Learn history and learn from it. Speak out against injustice, even if it is among your friends and colleagues. Don’t be silent.

In 1990 TV Ontario sent a film crew with Sigmund to retrace his journey and his Auschwitz experiences. The filmmaker has written two blogs about Sigmund his story, the journey to make the film, and included audio recordings of Sigmund Sobolewski: