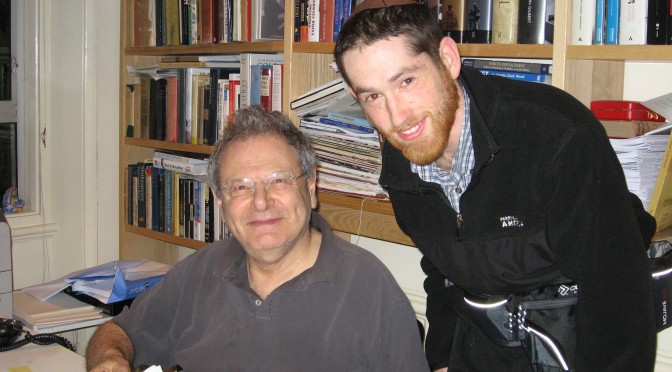 Editor’s Note: Last month, one of the world’s leading historians, Sir Martin Gilbert of London, passed away. Gilbert (1936-2015), author of about 90 books, was not only a leading historian, he was a Jewish historian. That is, he was a historian who happened to be Jewish. Famous for his multi-volume biography of Winston Churchill, he also wrote a great deal about his people, particularly about the Holocaust and the State of Israel. He was a Jewish Jew, a proud and public Zionist, as well as a member of an Orthodox shul in London, the Highgate Shul. He held high posts in British society, and his positive influence on British culture and politics helped in the fight against the anti-Semitism and anti-Israelism which is so rampant there.

All of this (and more) is public knowledge. What is not known is his “Baltimore connection” – our own Avinoam Miller, a connection that reflects Sir Martin’s middos and chesed. We are happy to share this story with our readers. Enjoy!

I first heard about Martin Gilbert from Rabbi Dovid Katz during a sermon at Beth Abraham. He thought very highly of Gilbert and said that he was Winston Churchill’s official biographer. I read some of Sir Martin Gilbert’s books and was amazed at how interesting they were, especially at how he appealed to both scholars and laymen. One or the other is expected, but appealing to both is incredible. So I did what any person would do: I went to his website and wrote to him. And he responded. Beautiful. So began our relationship.

In 2005, I went to White Plains, New York, to attend one of his lectures. After the lecture, I introduced myself, and he remembered who I was. I told him I was reading his book, Letters to Auntie Fori: The 5,000-Year History of the Jewish People and their Faith. I asked someone to take a picture of us, and Sir Martin gave me his autograph. After the lecture, I wanted to continue corresponding with him.

I became unemployed in 2008, and as a result, had a lot of free time. Since I was in court reporting school, I spent my days trying to reach 225 words a minute, so I could graduate and become a court reporter. I spent the other part of my day writing to Sir Martin. I told him during our exchanges that I would love to go to England and be his court reporter, which I thought was a silly suggestion. But I have a feeling he may have taken me seriously, because he then suggested that I take a “sabbatical” and come to England. I made the same suggestion later, and he responded the same way. I asked him what he had in mind, and he said he was compiling the “Churchill documents.” He asked if I was interested in transcribing them. After I picked up my jaw off the floor, I said yes.

Since Sir Martin doesn’t have the Eruv List, I gave him my number so we could discuss the details. I don’t remember the entire conversation, but I know that my mouth was dry. He said he would send documents to me, and I would type them up. It was easier to do it that way than scanning them. If he liked the arrangement, he would continue sending me the papers and would pay me. That is the essence of kindness, providing an unemployed person with employment.

He was pleased with my progress, and he admired the fact that I use 10 fingers. He only uses two, and always wished that he could type using 10. I reminded him on several occasions that he wrote more than 80 books with only two fingers. I won that argument.

After several weeks of typing, I made arrangements to fly to London and work there for one week. I would use one day to do some sightseeing, which was good enough, because the primary reason I was going was to work for him. As far as I was concerned, what else was there? Six years later, I still feel that working and touring for only one day was a smart decision.

I arrived at Sir Martin’s house, and there he was, working. I was in the presence of a man of tremendous intellect and incredible kindness. People are surprised, sometimes, with the situations in which they find themselves. This was one of those times for me.

He took a short break from his work and walked me to a large room adjacent to his house which contained, I think, only some of his research: binders, books, papers, all of which he had read. It was a sight to behold. He had read all the information that was contained in that room. Again, I was in the presence of a massive intellect. He didn’t know this, but I felt incredibly average during that little tour.

I spent up to eight hours a day transcribing documents in that same room. Of course, I took little breaks throughout the day. I was being paid by the word, which was wonderful. At 60 words a minute on a computer, coffee, Billy Joel, and Rush (the band), a person can accomplish a lot. While I was typing, I still couldn’t believe that I was in London, that I was working for a world-renowned historian, and that I was a part of his important work. I was only a court-reporting student with fast fingers. I was not a graduate student, historian, intellectual – not any of those things. I have coordination. Who would’ve thought?

Aside from normal breaks of getting up and going outside, Sir Martin insisted that I sit with him in his kitchen and have tea. I drank coffee, but he could tolerate that. His wonderful wife, Esther, insisted on preparing snacks for me, serving me like a king, and making whatever I wanted.

I wish I could remember all the things we talked about. I was star-struck the entire time, and I’m sure he was aware of it. I know we talked about his education, about politics, and who-knows-what-else. During these breaks, I told him quite often that even G-d rested, so he didn’t have to work so much. He never listened, which is just as well.

Looking back on this episode in my life, I realize that a number of coincidences had to occur in order for me to work for Sir Martin Gilbert, because I doubt I would have had this opportunity otherwise. If I hadn’t lost my job, I probably wouldn’t have gone to London for a week or even considered it. I wouldn’t have suggested being his court reporter had I not been in school studying it, and the suggestion of pursuing court reporting came from my mother. If I didn’t have the coordination, I would not have had the typing speed. If Rabbi Katz hadn’t mentioned Sir Martin, I probably would have never heard of him.

I was in the presence of greatness, kindness, generosity, and an excellent British accent. Because of Sir Martin, I earned some money while I was trying to find work and I had a once-in-a-lifetime experience.

I have a photograph of Sir Martin in my apartment, along with a photo of one of his bookshelves. I look at these pictures, and I am inspired. And I become envious of the intellect, knowledge, research, and mastery that he had in his field. I want the same mastery in my field.

It was with great sadness that I read the message not long ago from Esther, his wife, announcing his passing, the funeral at their shul in London (Highgate shul), and the shiva.(The kevura (burial) was in Eretz Yisrael, in Beit Shemesh). I will always treasure the friendship and kindness Sir Martin Gilbert showed me. I am sure there are many great historians out there. But are there many great menschen?