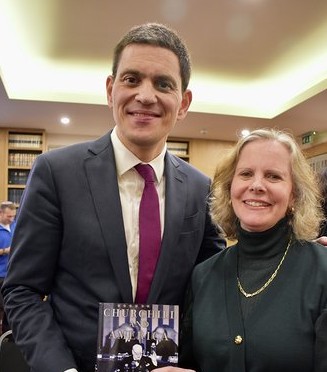 During David Miliband’s time as Foreign Secretary under Gordon Brown, Martin had occasion to meet him, and held high regard for him. Since leaving the Foreign Ministry, David has spent the last six years based in the United States, as President and CEO of the International Rescue Committee. So although he is out of the “cut and thrust” of politics, he is on the front line of dealing with one of the greatest difficulties facing our world today – that of refugees fleeing conflict and disaster. Regardless of one’s politics, here was someone who might be able to give us some insight into what is happening, both on our national levels, and internationally. When he agreed to give the second Sir Martin Gilbert Memorial Lecture (Sir John Major delivered the inaugural lecture in 2017), we were thrilled.

I was in touch with him David prior to his visit as he was interested in whether Martin had written “from a personal perspective” about Britain, its place in Europe, and its role as a liberal democracy. Among Martin’s materials I found the talk Martin had given in Tel Aviv entitled “Political Leadership” (see Martin’s Blog in this newsletter). Though it was written in 2011 and is geared toward the then-situation in Israel, it has great resonance today such that David even mentioned it in his remarks. In these confusing and polarising times, we need to be reminded of what true leadership entails, how real leaders view their positions, and what serving the public means.

I had hoped that David Miliband would consider a return to British politics, a calm and articulate voice and a sensitive ear to the people who need to be heard. But I had a moment of recognition in understanding his dilemma that took me back to my high school Government class. (Yes, Mrs Lapeyre, I was awake.) At that time we studied the American dichotomy of “states’ rights” as opposed to rights held by the federal government: Which has priority? How to find a balance between the two that allows for freedoms and yet promises protection for all? On a global level, isn’t this what many countries are facing today?

In these times when the speed of communications travels nearly as fast as the speed of sound, the world is connected like never before. In spite of this – or maybe because of it – nationalism is on the rise in many countries. Not unlike the tension between advocates for states’ rights and those who believed that the federal government should have overarching powers, we wonder where should we put our faith: in nationalism or globalism? And for David Miliband himself, is he better placed to serve in a national government, or work internationally to try to deal with the situations created in part by the policies of national governments? Where can he make the greatest impact? Where can we?

Read more about Churchill and America