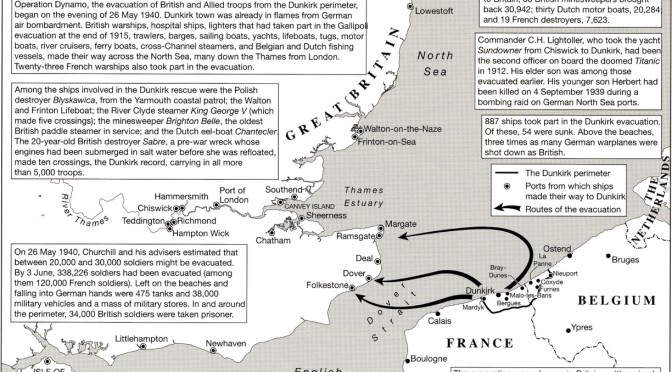 Sir Martin writes: “One of the craft that brought men back from Dunkirk on June 1 was the yacht Sundowner, owned and piloted by a retired Naval Commander, C. H. Lightoller, the senior surviving officer of the Titanic, whose younger son had been one of the first pilots to be killed in action the previous September. Lightoller later recalled how, before the war, his son had ‘at different times given me a whole lot of useful information about attack, defence and evasive tactics (at which he was apparently particularly good) and I attribute, in great measure, our success in getting across without a single casualty to his unwitting help’. Commander Lightoller, together with his elder son, and a Sea Scout, had brought back 130 men.”

… “At midnight on 2 June the last 3,000 British and French troops had been evacuated from Dunkirk, bringing the total to 338,226 men in seven days. … In all, 222 naval vessels and 665 civilian craft had ferried between Dunkirk and the British coast. Six destroyers and twenty-four smaller naval vessels had been lost. Thirty-eight British destroyers, never built to carry a mass of men, had brought away 91,624. Minesweepers had brought back 30,942. Thirty Dutch motor vessels had carried 20,284. French destroyers had lifted 7,623. Hundreds of merchant vessels, troop transports and sloops had brought back tens of thousands more. But in many ways the most remarkable feat of all was performed by the little ships: trawlers, coasters, tug boats, open boats, ships’ lifeboats, fishing vessels, river cruisers, paddle steamers, and more than six hundred small pleasure craft, which between them brought off more than 80,000 men, in groups from several hundred to half a dozen.” From Sir Martin’s :Routledge Atlas of the Second World War

For more on Dunkirk and other Operations: Second World War, A Complete History