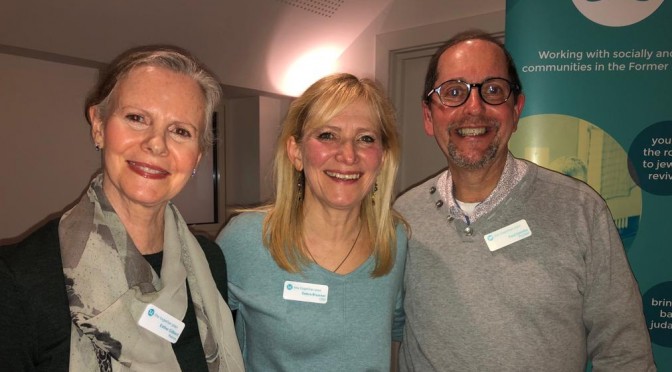 Photo: Esther with Debra Brunner, Founder and CEO of The Together Plan, and Paul Demby, former Chair of the Trustees, 28 February 2019, photo ©Debra Brunner

After years of being “Patron” of The Together Plan I will be adding “real content” in the form of Martin’s writings as a feature of their monthly newsletter.  Yes, it is a plan to be together, but what does that really mean?

Ten years ago a charity was started to rebuild and reinvigorate Jewish communities and Jewish communal life in Belarus.  Having lost hundreds of thousands of Jews to the German killing fields, forests and ravines near their towns, not to mention at the death camp of Maly Trostenets near Minsk where Jews from as far as Vienna and Theresienstadt were also deported to their deaths, Jewish communities were all but completely wiped out.  Then came the Communist years when religion was hugely suppressed, and history became really a thing of the past.  Governed by a dictatorship shunned by Holocaust educators outside of Belarus, Belarusian Jews seemed to fall through the cracks.  Yet Jewish history and a Jewish presence there today is searching for connection.  Making those connections, between Jews and with their rich history is the work of The Together Plan.

Martin visited Belarus in 1983 and again in 2004.  In 1983 he documented the stories of survivors he met in Minsk, those who had fought with the partisans, and fought in the Soviet army, including them in his book on Soviet Jewry The Jews of Hope.  In 2004 he came through Minsk en route by train from Hong Kong to London and spent time there seeing what progress had been made in uncovering Belarusian Jewish history.  It was well before The Together Plan but those who spent the day with Martin are working “together” with the London charity today.

The Together Plan’s mission is to “give communities a voice, and collective empowerment to strengthen community engagement around Jewish identity, heritage and history, while connecting those in the Diaspora to their Belarus ancestry and homes they left behind.”  On the Diaspora side, their programme Making History Together for children aged 13 and 14 introduces them to the Holocaust in the story of the Jews of Belarus during the German occupation, 1941 to 1944, while developing character and human rights values.  An exhibition sponsored by the British Embassy in Minsk is now available to schools, synagogues, and community centres in the UK, and a Russian translation will tour schools in Belarus.  In addition a Jewish Routes programme will connect visitors to places of Jewish history and heritage, culture and religion, aspirations and communities.

Short excerpts from Martin’s writing will describe some of the history and people of this ancestral Jewish homeland, and will be available on their newsletters and as blogs.  Yet again his work is vital to understand the history and the context of our world today.