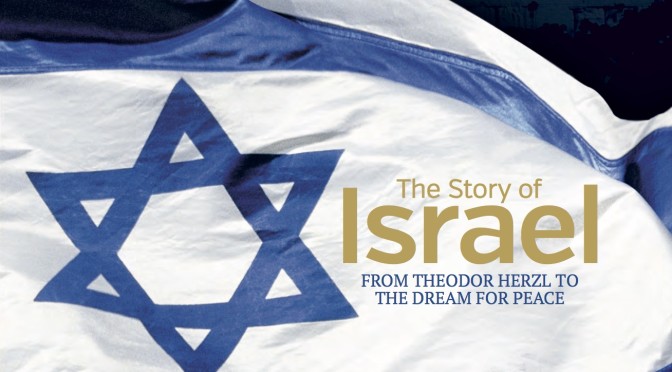 In 2008, Carlton Publishers commissioned Sir Martin’s book The Story of Israel which tells the story of the dream of a Jewish National Home in British-Mandate Palestine through to the present day. The book is “different” in that it tells the story through removable facsimile documents along with Sir Martin’s maps, well-chosen photographs (many of them his own), and his text woven throughout. Recently, Carlton decided to reissue the book, but with the documents as an integral part of the book itself, offering an exciting opportunity to re-envision and re-create one of Sir Martin’s titles with a fresh new look and feel.

It was my pleasure to help along this process, to find new photographs that were needed, to adjust their captions, to play with design and colour and layout, and to do the Index and proofreading. Anna Darke, the commissioning editor at Carlton was ever so patient with me. (She also got married and honeymooned between the beginning discussion and the final corrections.)

I felt Martin looking over my shoulder and I hope he approved. In July 2001, Martin let me help him do the Index for his one-volume History of the 20th Century. Amazingly, the first thing we did was go to Staples and buy … index cards. Who knew an index could be done on index cards! As we sat, Martin went through the text and when he found something to index, he either created a new card or added to one he had started. It was my job to keep the cards in order, retrieve what he needed, and file them correctly. He also used the indexing as an opportunity to do a final read-through of the proofs, making careful corrections in the margins. This time, the whole process was done with email and couriers, and the index based on the original one Martin had compiled. Having the documents as part of the pages allowed me the opportunity to include them in the Index as well.

The Story of Israel will be out in time for the 70th anniversary of the establishment of the State of Israel next spring. “Watch this space” for updates and opportunities to pre-order it.