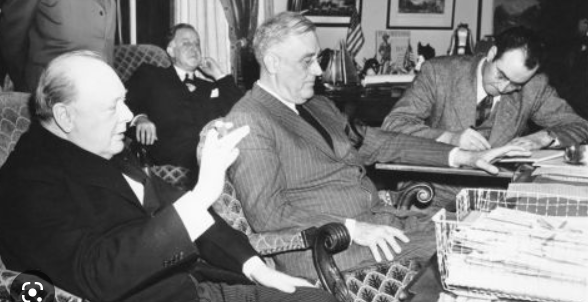 Germany declared war on the United States on 11 December 1941, four days after the Japanese attack on Pearl Harbor.  Churchill, concerned that the United States might nevertheless focus its main energies on the war in the Pacific, left Britain by ship on December 13 for Washington, where, starting on December 22, he spent a total of fourteen days in talks with President Roosevelt, who agreed that the war in Europe and the Mediterranean would take priority over the defeat of Japan.  On 24 December 1941, from Washington, he broadcast to the American people:

“This is a strange Christmas Eve.  Almost the whole world is locked in deadly struggle, and, with the most terrible weapons which science can devise, the nations advance upon each other.  Ill would it be for us this Christmastide if we were not sure that no greed for the land or wealth of any other people, no vulgar ambition, no morbid lust for material gain at the expense of others, had led us to the field.  Here, in the midst of war, raging and roaring over all the lands and seas, creeping nearer to our hearts and homes, here, amid all the tumult, we have tonight the peace of the spirit in each cottage home and in every generous heart.  Therefore we may cast aside for this night at least the cares and dangers which beset us, and make for the children an evening of happiness in a world of storm.  Here, then, for one night only, each home throughout the English-speaking world should be a brightly lighted island of happiness and peace.

“Let the children have their night of fun and laughter.  Let the gifts of Father Christmas delight their play.  Let us grown-ups share to the full in their unstinted pleasures before we turn again to the stern task and the formidable years that lie before us, resolved that, by our sacrifice and daring, these same children shall not be robbed of their inheritance or denied their right to live in a free and decent world

“And so, in God’s mercy, a happy Christmas to you all.”

Read: Churchill, The Power of Words