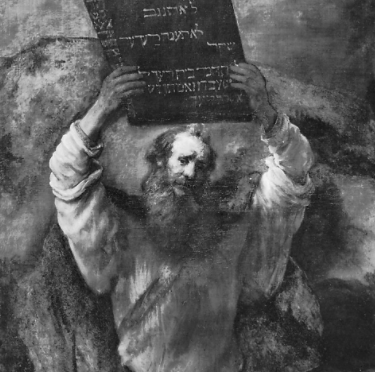 Photo: “Moses Showing the Tables of the Law to the People”, oil painting by Rembrandt, 1659

Stand beside her, and guide her,

Through the night with a light from above.

This month, Jews around the world are preparing their New Year celebrations in the unprecedented situation of socially-distanced and masked communities, unable to sing out loud the words and melodies of prayers that have sustained them for millennia – the injunction to save a life means that this year Covid-19 dresses the stage. There are prayers asking for forgiveness for misdeeds of the past year, prayers asking for comfort in these dangerous times, prayers of hope for a better year to come. They are prayers based on the the laws set down in the Torah, the Hebrew Bible. In a world torn by disease, frustration, violence, and with entrenched – and now new – poverty, there is much to learn in the ancient text to guide our behaviour today.

Two laws, or commandments, are of particular poignancy during our present distrustful and turbulent times.  Martin’s copy of the King James Bible translates Leviticus Chapter 19 verses 33 and 34 as this: “And if a stranger sojourn with thee in your land, ye shall not vex him.

“But the stranger that dwelleth with you shall be unto you as one born among you, and thou shalt love him as thyself; for ye were strangers in the land of Egypt: I am the Lord your God.”

Rabbi Joseph Telushkin, in his Book of Jewish Values, quotes the German-Jewish philosopher Hermann Cohen (1842-1918) that this injunction is the beginning of true religion: “The stranger was to be protected, although he was not a member of one’s family, clan, religion, community, or people, simply because he was a human being. In the stranger, therefore, man discovered the idea of humanity.” And in the stranger, one recognises one’s self.

The second commandment is an invocation against untruth and indifference, focussing on the power of language. King James translates Leviticus 19:16: “Thou shalt not go up and down as a talebearer among thy people; neither shalt thou stand against the blood of thy neighbour: I am the Lord.”

Rabbi Telushkin writes, “… the fact that the person who passes on an ugly rumor thinks that it is true in no way minimizes the harm inflicted on the rumor’s object.” This is followed closely by the second injunction, as Telushkin writes, “From Judaism’s perspective, people who stand by, silent and indifferent, while another’s life is at stake identify with Cain, the murderer who asked God, ‘Am I my brother’s keeper?’ (Genesis 4:9). Indeed, the law ‘Do not stand by while your neighbor’s blood is shed’ seems to come as a response to Cain’s question: ‘Yes,’ the Torah is telling us, ‘you are your brother’s and your sister’s keeper.’”

Whether one believes that all that happens in life is random, or whether one believes that our lives are governed by a higher power – Irving Berlin’s “light from above” – the commandments or laws codified in the Bible and observed in the main by those who are followers of the three monotheistic religions, recognise these precepts as being basic to a civilised society. In these very fraught times, civility must set the tone, and empathy for our fellow human beings must infuse the air we breathe.

Martin ends his History of the Twentieth Century with this: “Most if not all the people reading this book, like the author himself, will never have seen, except on television, the depths of human misery which, with all the marvellous achievements which the twentieth century saw, the opportunities created by wealth and leisure, the challenges of creativity and production, nevertheless scarred every region of the world.”

Jews are facing a New Year, many will be celebrating the holiday with virtual communities or on their own, as synagogues are mandated to limit numbers in attendance to keep their congregants healthy. Children are beginning a new school year with parents and teachers forced to make impossible decisions as to the benefits of attendance against the risk of spreading or catching disease. Governments are desperate to rebuild their economies while keeping their constituents safe. Now is an opportunity for a reset of our priorities in life, an opportunity to view our fellow human being – neighbour or stranger – with decency and compassion, civility and empathy.

May we all merit good health, peace, security, prosperity and a willingness to work together to create that for all humanity. This September reminds all that the empathy for those who have been traumatised though loss by recent illness or violence must trump the rumour mongering, and the silence and indifference towards those in the “depths of human misery”. Empathy toward others – ally or adversary – must be one of the lessons learned from the scars of the Twentieth Century, and from these traumatic times we now face. As my late father would say: “There’s no time like the present.” May the New Year be one of good health and sanity, peace and prosperity.