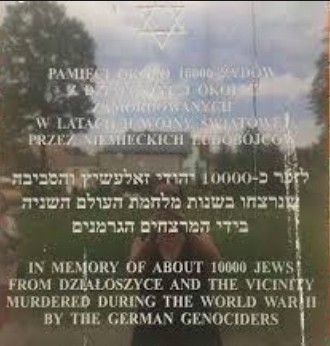 Photo: Memorial to the Jews of Dzialoszyce murdered “by the German Genociders”

Michael Brown, writing a piece in WND entitled “Why Russian Jews Dreaded Easter Weekend” has several inaccuracies that call out for clarification. His premise is that Jews in Russia were subjected to anti-Jewish violence that had been instigated by Christian religious leaders during Easter holidays. Unfortunately, the examples he uses do not reflect his premise.

Brown quotes a passage from Martin’s book, The Holocaust, in which Martin Rosenblum, a survivor of Dzialoszyce in Poland, describes the mass murder of 2,000 Jews that took place on 2 September 1942. Moshe Hersh, a friend of Rosenblum’s, relates to Rosenblum what had happened, as he had heard it from “the Polish police themselves”. Rosenblum writes: “They told Moshe Hersh about it in minute detail, because they themselves had taken part in that slaughter.” Brown goes on to quote the next paragraph of Rosenblum’s testimony: “… they went to church with their families, as if nothing had happened.”

Sadly Jewish history is replete with acts of terror, brutality and destruction, especially for those living in the “Pale of Settlement” during Czarist times and after, the “Russia” described in the title, and elsewhere in Europe. Much of the anti-Jewish feeling was instigated by religious Christian leaders. It is interesting however that Brown chose as an example of Christian leaders inflaming their congregations to commit atrocities, an act of mass murder against Jews in September 1942 at the height of the killing during the Holocaust, a conflicted time in Christian history, and a complicated one in Polish history – Dzialoszyce is in a part of Poland that had been Austro-Hungary and was never part of Russia or the Pale of Settlement.

The mass murder described by Rosenblum a few paragraphs before Brown’s quoted lines clearly states that the round-up of Jews, their transport to the mass graves that had been dug for them, and the machine gunning, was organised and carried out by the Gestapo. Certainly had local Polish police and Ukrainians collaborators not been willing to help, the task of murder would have been much more difficult to accomplish. But it was the Germans who instigated and organised it, not the Poles and not the religious leaders, all of whom were living under a brutal German occupation. It was the Germans who created an atmosphere where savagery and brutality and murder were not only allowed but sanctioned, an atmosphere where evil was unleashed and unchecked.

Drawing conclusions without understanding the full context is dangerous. Assigning blame to one group only repeats the history of scapegoating, and the Nazi Party showed us where that can go. The Christian Church holds responsibility for its religious anti-Jewish and political anti-Semitic hatred, much of which it has recognised and apologised for its role in inspiring. Context is important – in history, and how experiences are used. Easy answers are neither easy nor answers.