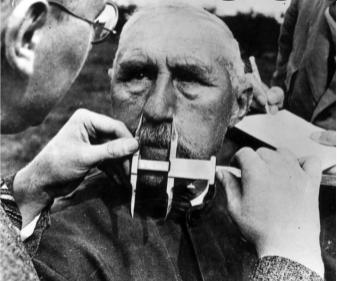 Photo : The Nazi racial policy that defined the physical characteristics of those worthy to be considered Aryans or members of the German “Master Race”, and those considered “Untermenschen” believed to be racially and socially inferior beings.

Who has not heard a child complain:  “It’s not fair!”  And what adult has not countered with:  “Life is not fair.”  In efforts to be non-controversial, the nature of controversy itself has become controversial.  And what better place to deal with this than in schools.

The State of Texas has enacted a bill, Number 3979 which has attracted widespread outrage and discussion.  In Martin’s way, let us look at what the bill actually says:

A Bill to be Entitled / An Act / relating to civics instruction public school students and instruction policies in public schools.  Be it enacted by the Legislature of the State of Texas:  Section 1.  Section 28.002, Education Code, is amended by adding Subsections (h-1), (h-2), and (h-3) to read as follows:

(h-2) In the instruction of the essential knowledge and skills for the social studies curriculum, in applicable courses of Texas, United States, and world history, government, civics, social studies, or similar subject areas:

(1)  no teacher shall be compelled by a policy of any state agency, school district, campus, open-enrollment charter school, or school administration to discuss current events or widely debated and currently controversial issues of public policy or social affairs;

(2)  teachers who choose to discuss current events or widely debated and currently controversial issues of public policy or social affairs shall, to the best of their ability, strive to explore such issues from diverse and contending perspectives without giving deference to any one perspective;

The bits that have raised the fear and ire of Jews in particular is the wording “widely debated and currently controversial issues” coupled with “without giving deference to any one perspective”.  The study of history is that of power, and economics.

But wait – the Canadian province of Alberta, on its “Alberta Education Guidelines For Recognizing Diversity and Promoting Respect” even gives us an example of not giving deference.  Under Criterion D – Reflection and Guidance Notes, point number 2 states:

Does the resource reveal both the positive and negative behaviours and attitudes of the various groups portrayed?  For instance, if a video details war atrocities committed by the Nazis, does it also point out that before World War II, German government’s policies substantially strengthened the country’s economies?

Why might Jews – and even non-Jews – be upset by these policies?  During the Second World War there was an aggressor who, with propaganda and the iron fist of a brutal totalitarian regime, took control of a civilised country, some of its neighbours, and then more and more of its neighbours until it dominated much of the whole of Europe.  Millions of civilians were murdered; millions were displaced during and after the aggressor had been defeated; and today millions are still grappling with the after-effects of this cataclysmic human disaster, not least Jews who experienced more than half of their total worldwide population murdered solely because they were Jewish and happened to be living in what became occupied territory.

Sadly, the Second World War is still considered by some to be “controversial” and “without giving deference” opens the door to a potential for acceptance that the policies of the aggressor Nazi Germany become “debatable”.  Is it fear of the facts or complete ignorance of them?

The Alberta example shows the latter.  How did a country impoverished and shamed by its defeat in the First World War become, in a matter of a few years, capable of attacking, defeating its enemies, and carrying on a destructive and no doubt expensive continent-wide war for six years?  How did Germany, in the six years before the war, have the economic wherewithall even to prepare such an endeavour?

The story of Germany’s pre-war finances has, I think, yet to be written.  But we do know how its policies “substantially strengthened” its position – by robbing the Jews of Germany.  Any German Jews who worked in government employ, including professors, teachers, healthcare workers, municipal workers at every level, were let go.  Jewish businesses were boycotted, destroyed, confiscated.  During Kristallnacht, the night of 9 November 1938, all synagogues in Germany were destroyed – and the Jewish communities were forced to pay the insurance costs.  Jews who wanted to flee the country were allowed to take a small fraction of their financial resources.  Homes, businesses, artwork, investments, all was taken over by the German government.

Wherever Germany invaded and conquered, Jewish businesses and possessions were the first to be confiscated.  Crippling ransoms were paid by Jews locked in ghettos on the assumption that it would save their lives.  It didn’t.  All material goods were recycled – to the Germans locally in charge, to Germany, and to local collaborators.  Jews were stripped not only of their possessions, but, before they were killed, the clothes they wore, which Jewish slave labourers repaired before these items were sent to Germany.

Are these then the positive or negative behaviours of a government’s policies?  There is a lot to learn from Nazi Germany, not least the way a democratically-elected government can become a totalitarian regime with the use of propaganda and scapegoats and education that focusses on elevating one group of citizens over another group.

There is moral value to discussion, there is opportunity to explore fascinating aspects of human behaviour.  Schools (and universities) must be safe places where young people can explore the values that previous generations shared – the good, the bad and the ugly.  If teachers feel they do not have the guidance to be able to teach right from wrong on a human level maybe it is the educators who must revisit “essential knowledge” and how teachers can impart that while being true to the facts of history.