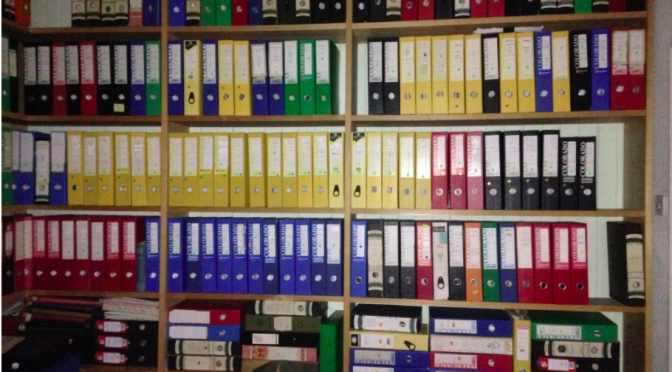 Photo: Some of the hundreds of box files of Sir Martin’s archive

In March, Hillsdale College in Michigan announced they had acquired Sir Martin’s library and archive. As the above excerpt shows, Martin spoke with anyone who had known Churchill, worked with him, worked for him, even those who worked against him. Martin also went through their archives, and took notes from interviews – he told me he learned to transcribe phrases and conversations unobtrusively under the table so as not to interrupt the discussion. He also developed a vast correspondence with them, and so many others.

It was a method Martin continued with whatever area interested him. Martin told me that Bill Deakin, Martin’s mentor and Warden at St Antony’s College in Oxford, who had been Churchill’s literary advisor, told him that while going through the Churchill papers (15 tons in all), Martin was bound to find things of interest. Knowing Martin, Deakin knew that there would be interest beyond what Martin needed at that particular moment, things he might like to write about at another time. Deakin advised Martin to make note of what interested him. And he did.

In addition to Martin’s early writings on the origins of the Second World War, his biographies of Clifford Allen, Lord Allen of Hurtwood, and the diplomat Sir Horace Rumbold, and later on Natan Sharansky, Martin wrote on the Holocaust, the First and Second World Wars, British-Mandate Palestine and Israel, Jewish History and the history of the Twentieth Century. His archive includes original documentation, copies of specific documents from the Public Record Office (now the National Archives), memoirs, diaries, and correspondence with those in government, the military, the diplomatic service and eyewitnesses to the action. All were collected, inspired by Bill Deakin’s suggestion, based on whatever Martin found of interest, and grew exponentially as did his curiosity.

Martin’s love of maps created an archive of maps that were the foundations of those he drew. His photography collection includes many photos he took in his travels, now historic sources in themselves.

The Acknowledgements and Bibliographies in Martin’s books show the range of archives and sources explored and mined for information. The source material for every one of his footnotes is part of his library and archives.

In the world of email, Facebook and Twitter, the “paper trail” is becoming extinct. Martin’s library and archive is a rare jewel, and will now be lovingly catalogued and maintained by Hillsdale College. It will help to make the College a research center for information on the tumultuous Twentieth Century.