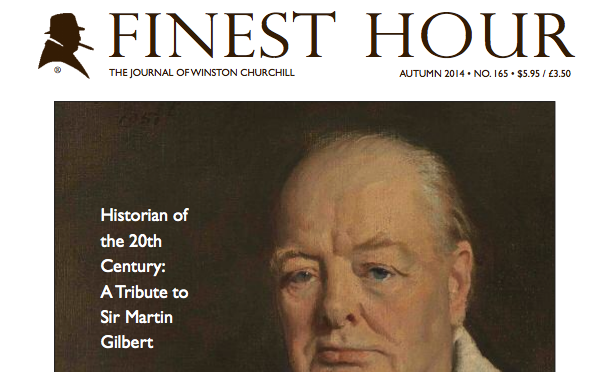 This is my last issue of “Finest Hour”. There is no better way to complete my work of forty years than with these tributes from some of Martin’s many admirers. I am grateful to them all for highlighting an extraordinary career in words full of love, respect, humor, and above all of the character and humanity of a great man.

Martin Gilbert by his Friends:

The Road Not Travelled, Gordon Brown, British Prime Minister, June 2007 to May 2010

The Map-Maker, Tonie and Valmai Holt, Battlefield Guides and Authors

“Would You Like to See the Fulton Speech?”, Barry Singer, proprietor, Chartwell Booksellers, New York, Author

Churchill and the Holocaust:  A Personal Memoir, Cyril Mazansky, Former Member of the Board of Governors, Finest Hour

A Gentleman and a “Mensch”, Matthew S. Gould, CBE, MBE, Her Britannic Majesty’s Ambassador to the State of Israel, September 2010 to 2015

Gilbert and Bibliography, Ronald I. Cohen, MBE, Author, Bibliography of the Writings of Sir Winston Churchill

“He Worked Like a Tiger”, Randolph S. Churchill, Great-grandson and Trustee of the Winston Churchill Memorial Trust

Read the articles in the Finest Hour