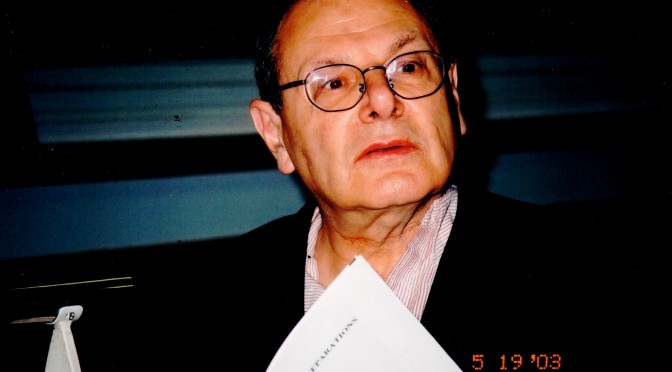 Photo: Sir Martin, describing the preparations for the Normandy Landings, May 2003. Photo © Bernie Pucker, with thanks to Liz Burgess.

Patrick Kidd, in The Times on April 29, writes of the tragedy of the Slapton Sands rehearsal for the D-Day landings:

Sir Martin, in D-Day, gives the background to this tragedy and the extraordinary measures taken to ensure the secrecy of the landings:

Practice seaborne landings were taking place on various beaches in southern England. The largest of these exercises, Operation Tiger, was carried out at Slapton Sands between April 26 and 28. It was intended as the final rehearsal for the American troops who would land on Utah Beach (Assault Force U). Their escorting destroyer, HMS Scimitar, the main escort for the convoy, had been in a collision with a landing craft the night before and did not sail from Plymouth after her repairs.

As the exercise proceeded, seven German torpedo boats, which were on a routine night patrol from Cherbourg, came across Operation Tiger while it was at sea. Two of the eight Tank landing ships were torpedoed and sunk and another was badly damaged. There was considerable loss of life – kept secret at the time – with 639 American soldiers killed. This was three times the number who would die on Utah Beach on D-Day.

For mounting the attack, the German commander of the naval patrol, Captain Rudolf Peterson, was awarded the much-prized Oak Leaves to the Knight’s Cross which he had won in 1940. Rear Admiral Don P. Moon, the American commander of Assault Force U, committed suicide three months later. The Commander-in-Chief, Plymouth, Admiral Sir Ralph Leatham, while admitting a “lack of liaison” with regard to the absent destroyer, pointed out that the Royal Navy was about to carry out a major offensive operation in the Channel on April 28 and that “the capacity of the staff was severely overstretched.”

Many of the dead Americans were specialist engineers who could not easily be replaced. Ten of the American officers drowned off Slapton Sands on April 28 had secret information relevant to the actual cross-Channel invasion – information given under the code name Bigot only to those who needed to know it. To ensure that none of the ten had been picked up at sea by the Germans – who had taken several men prisoners – a vast search was carried out, and all the corpses that could be recovered were carefully examined. Although more than a hundred bodies were never recovered, those of each of the ten Bigot officers were found. The cross-Channel secrets remained safe.