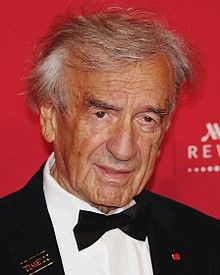 Please forgive me for breaking with “tradition” in this space but I feel compelled to write about the great loss those in Holocaust education and remembrance feel at the news that Elie Wiesel has died.

Although I had the great privilege and honour to have met him on several occasions, my most profound memory of him was an interview I heard on television many years earlier. It was in the late 1960s, and I was in high school. At that time no one yet used the term “Holocaust” to describe the murder of six million of Europe’s Jews during the Second World War. Holocaust education and remembrance were personal matters, not public events. The interview made such an impact on me that I could recognise Wiesel’s voice whenever I heard it after that.

Wiesel was asked about his past, and about his future, and how he could go forward after having experienced what he had. He was asked if he could contemplate bringing children into this world, having seen what savagery human beings are capable of perpetrating. Wiesel responded by describing his family, the long line of scholars from which he had descended. Then he said: How can I be the last? What right do I have to be the last in the family line?

My mother had lost her entire family just to the east of Wiesel’s hometown. I had been searching for an identity, a way to understand how I felt about all of that. Then I heard: What right do I have to be the last? And it resonated with me. I had a sense that I was part of a continuum, and that we can go forward even as we take the past with us.

In the late 1980s I was living in Edmonton, Alberta, in Canada. A group began of “Second Generation,” children of Jews who had survived what was by then known as the Holocaust, though in those days “Holocaust” was synonymous with “doom and gloom”. We wanted to look at it in a life-affirming way, to be proud of what our families had come through, and what they had taught us about the sanctity of life. We wanted to look to heroes to counter the myth that the Jews had “gone to the slaughter like lambs”. This was the start of a journey for me that culminated in meeting and getting to know three extraordinary men who changed the way we view the Holocaust today: Rudolf Vrba, Elie Wiesel, Martin Gilbert.

Rudolf Vrba had been one of the four Jewish escapees from Auschwitz who brought out (in the spring of 1944) the news that Auschwitz was a death camp, that Jews were brought from across Europe for the sole purpose to be murdered, and the murder was carried out on an industrial scale. Vrba taught us that there was resistance, and his memoir, I Cannot Forgive (published in English in 1963), described in detail what the situation had been. Because of what he had seen there, Vrba understood that robbery was an integral part of the Holocaust, that to the Germans, Jewish life was the cheapest commodity after everything else had been stolen.

Elie Wiesel’s book Night was first published in English in 1961. Wiesel taught us that the Holocaust was both a uniquely Jewish and a human catastrophe. His lifelong commitment to Jewish education and to Holocaust memory reminds us that we each must be responsible for our fellow human beings, that we cannot leave it to others, to governments, to our leaders and representatives when we have the opportunity to speak out against fear and hatred, that we each must be responsible for each other.

Martin Gilbert made their experiences, their voices – these two and hundreds if not thousands of others – an integral part of Twentieth Century history. Hard to imagine but he was criticised when his first book on the Holocaust, Final Journey came out in 1979, for incorporating survivor accounts into the history. But having spent years in the Churchill archives, Gilbert understood how important the human aspect was. By weaving their eyewitness accounts into his histories, by quoting their testimonies, by giving them a voice, he changed the way history is written.

Now they are all three gone. We are indeed richer for their presence in our world, and poorer for their loss. But mainly we are lucky to have lived during the same time as they did and to benefit from the work they have left behind.