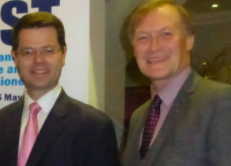 In my computer files is a quote from one of The Boys, the child survivors who came to Britain after the Second World War about whom Martin has written.  Moshe Nurtman asks a basic question about the evil he encountered:

Why kill me?  Was Hitler better than me?  Who was he to decide who should live or die?  It is just difficult for me to accept the whole structure of the human element.  I cannot understand it – in this century.  The world had such great people in the past, and we allowed ourselves to be so vicious to one another.  That I cannot understand.

Was “he” better than me?  Who was “he” to decide who should live or who should die?  It is a question that comes up as we try to wrap our brains around any murder, not least the recent murder of the British Member of Parliament, Sir David Amess.  Amess was a Catholic, stabbed to death in a Methodist Church where he was meeting with his constituents, by a young man who may have been radicalised by Islamic militants.  The irony of the religious aspect was that the Catholic priest who rushed to the Church to administer the last rites was not allowed into the Church by the police because it was a crime scene.  It seems the secular world encroached after all.  But at that particular moment?

Sir David was a public official who had served for most of his life, 38 of those years in Parliament, a father of four, a husband, a friend, a decent man, generous and honest who worked tirelessly for his constituents.  October also saw the death of James Brokenshire, a former MP, a friend, a young man taken much too soon by cancer.  Neither had a fighting chance against a deadly assailant.  I don’t know whether Martin knew either of them.  I had the pleasure of meeting Mr Brokenshire in 2018 when he was Secretary of State for Housing, Communities and Local Government.  His father-in-law had been given a life-saving visa by Frank Foley, the British passport officer in Berlin before the war.  I sent Mr Brokenshire Martin’s pamphlet about the British diplomats who did so much to help Jews in Germany, and I received a lovely letter back from him.

The pain and loss that their constituents, colleagues, and friends feel is deep.  That of the Amess and Brokenshire families is profound.  One family fought a losing battle and knew the inevitable result would be loss.  The other family had no idea, no time to prepare, no understanding of what they would be facing.  Nor did he, until it was too late.

At the loss of these two men, two who served their public and their causes of justice and righteousness, there is only silence.  Illness has its own sacred space.  But as Moshe Nurtman says:  “… we allowed ourselves to be so vicious to one another.  That I cannot understand.”

(For a modern interpretation of this powerful prayer, Who by Fire, with an introduction that gives his inspiration for the song, Leonard Cohen) :  https://youtu.be/elbG-SFJM8w

Sent on October 8 as a tweet by Sir David:

“I am deeply saddened to hear of the death of my friend and colleague James Brokenshire.”
Sir David met his own untimely death the following week.