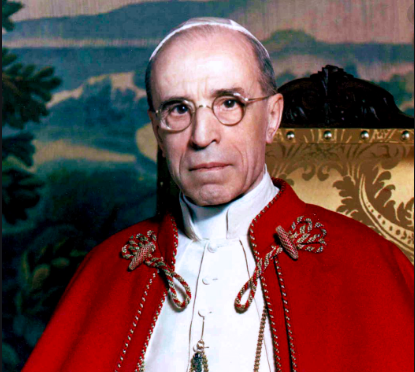 Thank you to my careful readers who found the typo in the March newsletter – what Martin would have called “a howler”. Very early in our own correspondence, Martin would send his writing by fax machine to me in Canada and I would make corrections and notes and fax it back to him. I can see he would not have been impressed with me now! But I am grateful that so many of you read these newsletters carefully, even to the letter!

Interestingly, my “howler” was in the Web Citing having to do with recent news that the Vatican will be opening their archives to researchers. In Martin’s book The Righteous, in his chapter “Italy and the Vatican”, he quotes the German protest at the 1942 Christmas message of Pope Pius XII who the Germans claim is a “mouthpiece of the Jewish war criminals” because “he is virtually accusing the German people of injustice towards the Jews.” Martin cites other instances of practical help the Vatican was able to give to the Jews of Rome.

It will be interesting to see what the archives illuminate about the Pope during those difficult years of the war. Martin may be right that the Pope was very helpful – and the articles quoting Martin will be vindicated. Maybe my typo about the “Catholic Churchill” was not so far off!

In 2007, Gary Krupp, from the Pave the Way Foundation, filmed an interview with Martin, which we have in an uncut unedited version on Martin’s filmography page. Gary’s videographer, Ardon Bar-Hama, found an edited version which captures all of Martin’s salient points on Pope Pius XII. I am grateful to both of them for making the effort to find this video and allowing us to post it.

It is well worth a listen.