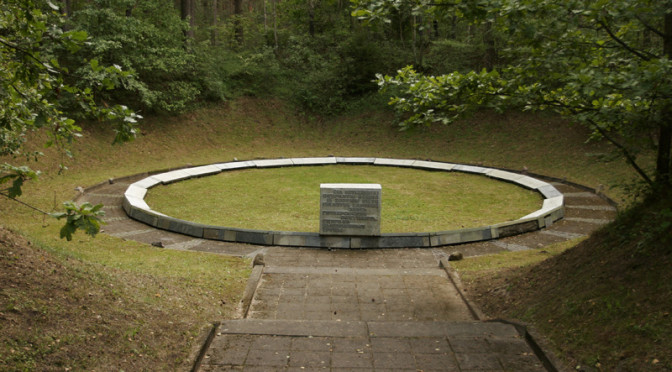 Photo: One of the Russian-built pits as fuel depots, used by the Germans as a mass murder site, into which the Jews of Vilna were shot, in the Paneriai Forest.

In September 2001, Martin and I were in Lithuania. Still reeling from the shock of 9/11, we were on the first flight that was able to take off, from Canada, to London for the weekend, then on to Warsaw for a few days, and then to Vilnius. Lithuania was in the process of joining the European Union and it was Britain’s task to help it come to terms with its history during the Holocaust. In line with this, Britain funded the Lithuanian translation of Martin’s book Never Again, and made copies available to teachers throughout Lithuania. September 23rd, the anniversary of the liquidation of the Vilna Ghetto in 1943, became, in 2001, the first annual “National Day of Shame”. Martin was invited to the proceedings.

Among the guests who collected in Vilnius was Samuel Bak who had been a child prodigy artist in the Vilna Ghetto and has spent his life since then recreating in paint on canvas his sense of the world turned upside down and the losses that he experienced. He came, with his family, and with his paintings for display in the newly renovated Theatre.

Rachel Kostanian, the curator of the Holocaust Museum known affectionately as the Green House, gave us tour of the Vilna Ghetto area. Rachel’s prodigious knowledge of every doorway and every event brought to life the heroic efforts of the ghetto’s leaders and inhabitants to maintain humanity and hope amid starvation and disease, destruction and death.

Martin and I went to Kaunas, known to Jews as Kovno, and to Slobodka, the area across the River Neman which became the Kovno Ghetto. From there we went to the nearby Ninth Fort where the Jews of Kovno were taken to be murdered.

Then came the day of September 23rd. Commemorative events were held at Paneriai, the nearby forest known to Jews as Ponar which before the war had been a picnic area near to Vilna. Deep pits dug by the occupying Russians to store fuel had become the mass murder site of Vilna’s Jews. But as I have come to know him, I see that Martin preferred visiting these sites alone or with a few friends, not with television crews and the media. So that September 23rd found us on the road to nearby Ukmerge, the town known to Jews as Vilkomir, where Martin’s maternal grandparents had come before emigrating to Britain. With us was Martin’s daughter Natalie, keen to learn more about the origins of her father’s “Granny Green”.

Black ribbons were hung at the doorways of Lithuania’s public buildings on the 23rd of September. In Ukmerge, the local sports centre is a solid brick building and had its black ribbon. This sports centre had been built in 1851 as the Great Synagogue, built to replace an earlier wooden structure that had burned down. The irony of seeing a black ribbon hanging at the doorway of a former synagogue was profound.

Martin was drawn into the Lithuanian story by a visit from Avraham Tory in the early 1980s. Tory had been the Secretary of the Jewish Council in Kovno and had managed to hide and then retrieve his diary of those days. With Martin’s help the diary eventually saw the light of day and its place on bookshelves and in the historical canon. No other such complete original source of a ghetto Jewish Council survives. Surviving the Holocaust, the Kovno Ghetto Diary by Avraham Tory is vital reading for anyone interested in Lithuania and its history from the German invasion of 22 June 1941 to 1944 when Tory managed to escape.