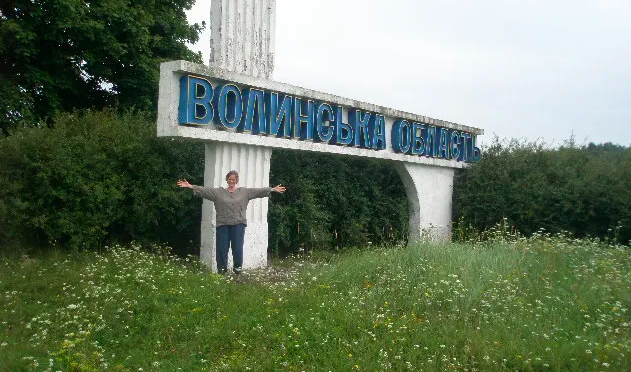 My mother was born in Poland.  Outside of her home and her close circle of friends, she spoke Polish.  She attended a Polish gymnasium.  She could recite Pan Tadeusz, the classic epic national poem of Poland by Adam Mickiewicz.  She felt Polish.  My father was born about 50 miles to the west of her hometown, nine years earlier.  On his American census he said he was born in Czarist Russia.  Their parents are buried in their hometowns, in Ukraine.

The region, one of the poorest provinces in Ukraine, was known as Wolyn when it was part of Poland and is Volyn or Volhynia today.  It is in the northwest corner of Ukraine, with Belarus to the north and Poland just across the River Bug to the east.  Martin and I spent some time there in 2011.  We came by train from London to Przemysl in Poland, continuing on by train across the Polish Ukraine border to Lviv, and north by car from there.  When we reached the border between Galicia and Volhynia, we stopped the car.  The line of trees designates the border between the two provinces.  During the Holocaust, Jews on the Galician side were deported to death camps, Janowska near Lviv and Belzec 50 miles to the northeast of Lviv; Jews on the Volhynian side were taken to nearby forests and ravines outside their towns and shot.  It is a continental divide of sorts, that between the Austro-Hungarian Empire and the Czarist.

One of the more interesting aspects explored by journalists covering the war in Ukraine is how Ukraine’s neighbours to the west have welcomed the Ukrainian refugees streaming in to their countries.  We forget how borders have changed.  Eight decades ago Western Ukraine was Poland.  Though they may differ in their beliefs, most on both sides of the border are Christian.  And sadly, they know war and they know totalitarian oppression – it is still in living memory for them.  Democracy is not something they can afford to take for granted.  In addition the refugees coming in are in the main women and children whose husbands and fathers and brothers are literally on the front lines in the fight for the democracy of Eastern Europe.  As soon as it is possible to live in peace and freedom in Ukraine again, the women and children will no doubt return to rebuild their country and their lives there.

Millions of refugees from the Syrian war languish in refugee camps in Turkey, Lebanon, Jordan; 1.1 million Rohingya refugees from Myanmar languish in refugee camps in Bangladesh; 2.6 million Afghan refugees are desperate to find a safe haven, 2.2 million are in Iran and Pakistan.  Refugee camps are not exactly the same as being welcomed with bus rides and donated food and clothing and medicine.  Could more Muslim countries take an example from the Poles, Slovaks, Hungarians, Romanians and Moldovans?  We all have something to learn about hospitality and courage.

Read: The Atlas of the Holocaust