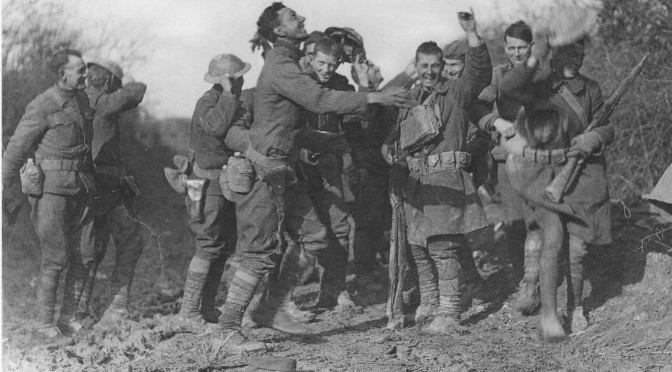 On the morning of 9 November 1918, the German armistice negotiators reached the Forest of Compiègne.  The German military delegate, Major-General von Winterfeldt, was the son of the man who had made out the terms of France’s surrender in 1870:  there was some speculation among the French as to why he should have been chosen.  But when General Weygand led the Germans into Foch’s railway carriage, it was clear that they brought with them nothing but the aura of defeat.

In the Forest of Compiègne the armistice negotiations continued throughout the day.  When Erzberger tried to explain the extent of the revolutionary danger in Germany, and the threat of Bolshevism invading central Europe and threatening the west, he used that danger as part of his plea for lenient terms.  Foch replied:  “You are suffering from a loser’s malady.  I am not afraid of it.  Western Europe will find the means of defending itself against the danger.”

On the night of November 10 news reached Compiègne from Berlin that the German Government had accepted the armistice terms.  Germany would evacuate immediately Belgium, France, Luxembourg and Alsace-Lorraine.  All inhabitants of these areas who had been deported, imprisoned or held hostage would be repatriated.

Foch immediately sent a message by telegram and telephone to all Allied commanders:  “Hostilities will cease on the entire front November 11th at 11.00 a.m. French time.”  When that moment came (the eleventh hour of the eleventh day of the eleventh month) all fighting on the Western Front would cease.

At the village of Ville-sur-Haine, just east of Mons, a Canadian soldier, Private George Price, was awaiting, as were millions of his fellow-soldiers, the ending of the war.  It was two minutes to eleven.  At that moment a German sniper bullet rang out and Price was killed:  one of the very last casualties on the Western Front, and one of 60,661 Canadian war dead.

“Officers had their watches in their hands, and the troops waiting with the same grave composure with which they had fought,” John Buchan has written.  “At two minutes to eleven, opposite the South African brigade at the eastern-most point reached by the British armies, a German machine-gunner, after firing off a belt without pause, was seen to stand up beside his weapon, take off his helmet, bow, and then walk slowly to the rear.”

A few moments later the watch-hands reached eleven.  Buchan, whose brother had been killed in action two years earlier, has written:  “There came a second of expectant silence, and then a curious rippling sound, which observers far behind the front likened to the noise of a light wind.  It was the sound of men cheering from the Vosges to the sea.”

The war was over.