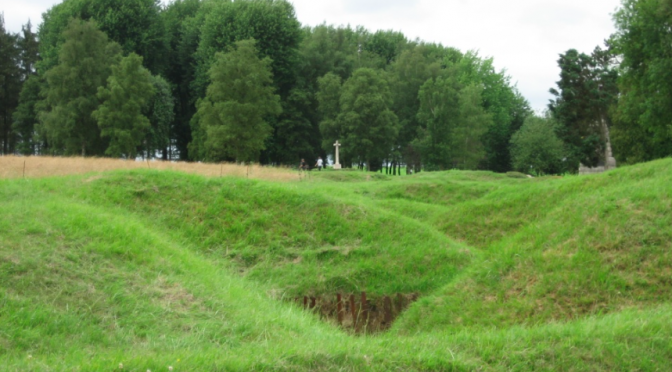 Photo: Trenches memorialised on the battlefield at Beaumont-Hamel where the Royal Newfoundland Regiment fought; the only regiment in the First World War to be given the designation Royal, in recognition of its wartime contribution.

From a 2008 talk Martin gave on his Atlases

In my Who’s Who entry I give my hobby as “drawing maps”. I have always been fascinated by the close links between geography and history. This fascination began long before I learned to draw maps, when, almost sixty-eight years ago, in June 1940, I was sent, as a three-and-a-half-year-old evacuee, by sea from Liverpool to Quebec. That fascination was confirmed four years later, in April 1944, when I was sent back to Britain, sailing from New York to Liverpool on the ocean liner Mauretania, then a troopship.

My subsequent travels continued to spur and inspire my map-making efforts.

In 1962, I went with my father to the Western Front, to the battlefields of the Ypres Salient. We saw the remnants of the trenches and shell holes, and the war cemeteries, and heard the Belgian firemen playing the Last Post each night under the vast canopy of the Menin Gate. On that monumental gate are engraved the names of 54,323 soldiers who were killed in the Salient and have no known grave. It was this visit that inspired me to begin work on what became the Atlas of the First World War.

In 1969, when I visited Field Marshal Montgomery with the proofs of this Atlas, he insisted, to my delight, on writing an introduction. “The idea of teaching history by a series of maps,” he wrote, “was new to me until Martin Gilbert’s Historical Atlas of British History came my way.”

The Field Marshal ended his introduction: “I look forward eagerly to his Atlas of the 1939-45 war in which I fought on the battlefields of Africa and Europe – being by then somewhat more senior in rank than in 1914.” Alas, he did not live to see the Atlas of the Second World War, but his published wartime despatches, which he signed for me, have aided me in my work on that Atlas.

The third edition of the 164-map Atlas of the First World War contains material that I put into map form after my last two visits to the battlefield of the Somme, with my wife Esther. The fate of soldiers from Canada – her country – is an integral part of these new maps.

During my 1958 hitchhiking trip to India, I visited the India Gate in New Delhi, on which are inscribed the names of more than 70,000 Indians who were killed in the First World War. The part played by India, on all the war fronts, in both world wars, is shown on maps in both the Atlas of the First World War and the Atlas of the Second World War, where India’s contribution to the Allied war effort has an important place. Having seen Indian war graves from Hong Kong to Monte Cassino, this is an aspect of the Second World War to which I have given due weight.

The Atlas of the First World War has a map of the home towns, names and ages of twenty of the 312 British soldiers executed for cowardice – which was in fact most often not cowardice but shellshock. Parliament has recently granted them clemency.

The Atlas of the First World War can serve as a first-class prelude for the tens of thousands of British schoolchildren who visit the Western Front each year. Their parents and grandparents, who also visit the immaculately maintained Commonwealth War Graves Commission Cemeteries on the ninety-four-year old battlefields, will be able to review the circumstances of the battles, and the course of the war in which their family members fell.