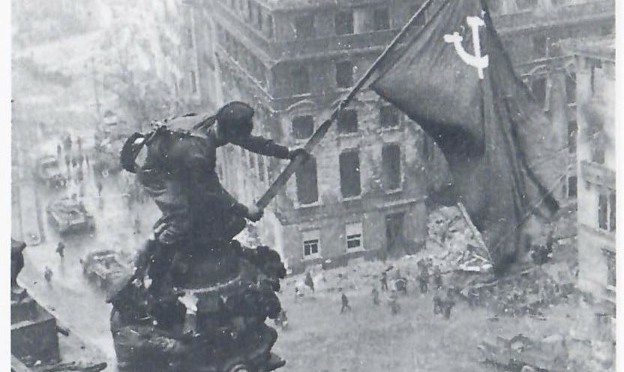 Photo: A Soviet soldier raises the Hammer and Sickle on the roof of the Reichstag, Berlin, 30 April 1945

Editor’s Note: April was meant to be a time to commemorate the 75th anniversary of the liberation of German concentration camps by British and United States forces, with visits to the sites by dignitaries, survivors and young people. Now, as Covid-19, the uninvited guest, sweeps across the world and keeps us parked at home, we remember the events of 75 years ago that brought to an end the last great worldwide conflagration:

It was on April 15 that the first British tanks entered Belsen. By chance, three of the British soldiers in the tanks were Jews. But the survivors could not grasp what had happened: “We, the cowed and emaciated inmates of the camp, did not believer we were free,” one of the Jews there, Josef Rosensaft, later recalled. “It seemed to us a dream which would soon turn to cruel reality.”

The “cruel reality” came swiftly at Belsen, as those first British tanks moved on, in pursuit of the German forces. For the next forty-eight hours, the camp remained only nominally under British control, with 1,500 Hungarian soldiers, who had been stationed in the camp as guards, remaining in command. During that brief interval, seventy-two Jews and eleven non-Jews were shot by the Hungarians, for such “offences” as taking potato peel from the kitchen.

There were 30,000 inmates in Belsen at this moment of liberation postponed. 1,500 Jewish survivors from Auschwitz; a thousand Germans sent there for anti-Nazi activities; several hundred Gypsies; 160 Luxembourg civilians who had been active against the German occupation; 120 Dutch anti-fascists; as well as Yugoslavs, Frenchmen, Belgians, Czechs, Greeks, and, most numerous of all, Russians and Poles – a veritable kaleidoscope of Hitler’s victims.

When, after forty-eight hours, British troops did enter Belsen in force, the evidence of mass murder on a vast scale became immediately apparent to them. Of ten thousand unburied bodies, most were victims of starvation. Even after liberation, three hundred inmates died each day during the ensuing week from typhus and starvation. Despite the arrival of considerable quantities of British medical aid, personnel and food, the death rate was still sixty a day after more than two weeks.

April 30, in Berlin at half-past two in the afternoon, a Red Army soldier, Sergeant Kantariya, waved the Red Banner from the second floor of the Reichstag. German troops were still on the floor above. Less than a mile away, Hitler was in his bunker, all hope of a counter-attack long abandoned. At half-past three that afternoon, having finished his lunch, he sent those who were with him – Goebbels, Bormann, and his personal staff – out into the passage. As they stood there, they heard a single shot. Hitler had shot himself in the mouth.

Waiting a few moments, Goebbels, Bormann and the others entered Hitler’s room. The Führer was dead. So too was Eva Braun; she had swallowed poison.

With a single pistol shot, the Thousand Year Reich was at an end, in ignominy, a mere twelve years since it had been launched in triumph. It had been twelve years of bloodshed, war and evil on a scale which almost defies imagination. As Soviet shells still fell around the Chancellery, Hitler’s body, and that of Eva Braun, were taken up from the bunker to the courtyard above, doused in petrol, and set on fire.

At ten minutes to eleven that night, the Red Banner flew on the roof of the Reichstag.

An excerpt from Second World War, a Complete History