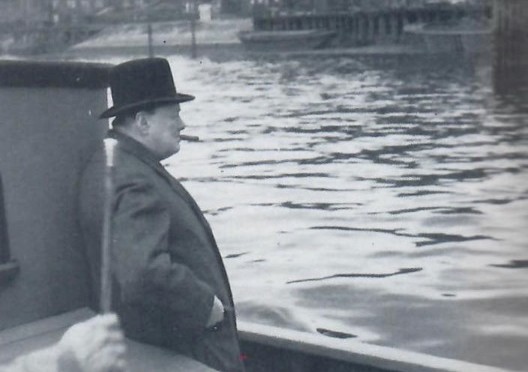 Photo: Viewing the bomb damage, 25 September 1940, from Churchill, A Life

Churchill had now to raise the morale of the nation and to sustain it; as part of this task he made every effort to stop the growing call for scapegoats for the pre-war neglect of Britain’s defences, telling the House on June 18: “There are too many who would hold an inquest in the House of Commons on the conduct of the Governments – and of the Parliaments, for they are in it, too – during the years which led up to this catastrophe. They seek to indict those who were responsible for our affairs. This also would be a foolish and pernicious process. There are too many in it. Let each man search his conscience and search his speeches. I frequently search mine.” Churchill went on to warn, “Of this I am certain, that if we open a quarrel between the past and the present, we shall find that we have lost the future.”

In this same speech, Churchill told the House that under Beaverbrook’s energetic direction, the number of aircraft being manufactured in Britain had risen from 245 to 363 a week. Now it was the pilots, Churchill said, who would have “the glory of saving their native land, their island home, and all they love, from the most deadly of all attacks”. What Weyband had called the “Battle of France” was over. “I expect that the Battle of Britain is about to begin. Upon this battle depends the survival of Christian civilisation. Upon it depends our own British life and the long continuity of our institutions and our Empire. The whole fury and might of the enemy must very soon be turned on us. Hitler knows that he will have to break us in this island or lose the war. If we can stand up to him, all Europe may be free, and the life of the world may move forward into broad, sunlit uplands; but if we fail, then the whole world, including the United States, and all that we have known and cared for, will sink into the abyss of a new dark age made more sinister, and perhaps more protracted, by the lights of a perverted science. Let us there brace ourselves to our duty and so bear ourselves that if the British Empire and its Commonwealth last for a thousand years men will still say ‘This was their finest hour’.”

Churchill repeated this speech over the radio four hours later. He was tired, and to those who had heard it earlier in the Commons it sounded much less convincing in its broadcast form; but to those who heard it the first time as they sat around their wireless sets, it was an inspiration. These were “only words”, he later reflected. Foreigners, who did not understand “the temper of the British race all over the globe when its blood is up, might have supposed that they were only a bold front, set up as a good prelude for peace negotiations”. He knew that “Rhetoric was no guarantee of survival”. Peace terms might have been offered for which many “plausible excuses” could have been presented. Many might have asked why Britain should not join the “spectators” in neutral Japan, the United States, Sweden and Spain, to watch with detached interest, “or even relish a mutually destructive struggle between the Nazi and Communist Empires?”

Than night 120 German bombers attacked eastern England; nine civilians were killed an new phase of the war had begun. “Let us get used to it,” Churchill told the House of Commons in a Secret Session on June 20. “Eels get used to skinning.” Steady and at times intense bombing must become a “regular condition” of British life. The outcome of the battle would depend upon “the courage of the ordinary man and woman.”

From Churchill, A Life