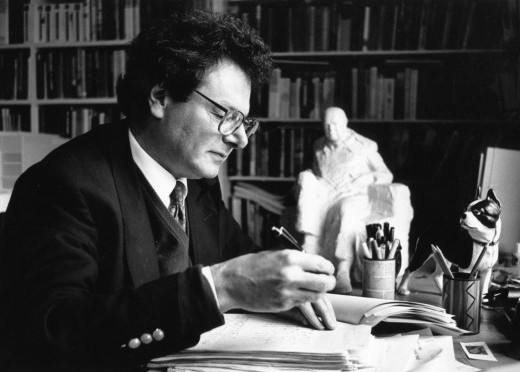 Photo: Martin, working on the Churchill biography, 26 March 1991. Photo by Edward Hamilton West for The Guardian

In the spring of 1967, Randolph Churchill, who was then far from well, was making plans for the future of the Official Biography. One evening after supper he asked me—one of his research assistants—to discuss what he wanted to happen to the Great Work (as we called it) in the event of his being unable to continue it.

Randolph knew exactly what he wanted to happen; it was not a question of discussion. He wanted his son Winston to take over authorship of the work. He asked me to read aloud to him the sentence in his father’s letter of the summer of 1915—when he thought he might be killed while on an official visit to the Dardanelles: “Randolph will carry on the lamp.” Now, said Randolph, if I am unable to do so, Winston will carry on the lamp of the Great Work.

The plan was this. Working at Stour, Randolph’s house in Suffolk, I would hand over one of the chapters on which I was then working to Winston, who would take it over, and prepare it for its final form. Randolph and I discussed which chapter it should be. We chose one of the most dramatic and controversial: Chanak.

Winston set to work. His first task was to read his grandfather’s account of the Chanak crisis in The World Crisis: that dramatic episode in the summer of 1922 when Britain seemed about to go to war with Turkey for the second time in eight years, as the Turkish national forces under Mustafa Kemal and Ismet Inönü (both of whom had fought on the Gallipoli Peninsula) advanced on the British Zone of the Straits—the area around the Sea of Marmara—including Constantinople and Chanak, both of which had been under British occupation since the surrender of the Ottoman Empire in October 1918.

After reading his grandfather’s account, Winston settled down to reading the files that I had selected from the archives in the Strong Room just outside the house: Churchill’s telegrams and letters, his interventions in Cabinet, and his persistent attempts—as Secretary of State for the Colonies—to win over the British Dominions to a firm stance. There then followed the Conservative Party’s rebellion against the policy and against the government—headed by David Lloyd George—of which the Conservatives were then an integral part.

Winston worked well. I was able to report to Randolph that his son had entered into the spirit of that testing moment in his grandfather’s career—in the election that followed, Churchill was defeated and out of Parliament for the first time in twenty-two years. Randolph was pleased, and relieved that his would-be successor was up to the task.

A year after this trial run, Randolph died. His British publishers, Heinemann, to whom he had also confided his choice, announced that Winston would take over. Winston invited me to his home in Sussex, to discuss the sort of setup that he would need, and how best for him to continue the Great Work. I offered to help him for six months while he built up his team and evolved his method.

In making the public announcement that Winston would be the new biographer, the Chairman of Heinemann, Charles Pick, said to me with pride: “We now have Churchill by Churchill and Churchill.” He saw it as a first-class selling point. But he had not reckoned with another company chairman, the newspaper proprietor Lord Hartwell, the head of C&T (Churchill and Telegraph), that had the main contract for the Great Work, which Lord Hartwell was serialising in the Sunday Telegraph.

Lord Hartwell looked at his contract. In it he read that whereas Heinemann, as the principal publishers (in the United States it was being published by Houghton Mifflin) had the right to nominate Randolph’s successor, he, Lord Hartwell, had the right to veto that nomination. He did so without delay. He fulminated against the publishers for not having consulted him, he fulminated in equal measure against Randolph and Winston, and he nominated his own brother-in-law, Freddie, Second Earl of Birkenhead (the son of Churchill’s great friend F.E. Smith, 1st Earl of Birkenhead), to complete Randolph’s work.

Winston was devastated. Hartwell was adamant. I went to see him in his office on the top floor of the Telegraph Building in Fleet Street to plead Winston’s case—based on Randolph’s wishes. Lord Hartwell gave me a lecture about Randolph’s failings, and about how tedious he had found the first two volumes of the biography. As for Winston, he produced a well-rehearsed range of arguments about his lack of experience and temperamental unsuitability—“like all the Churchills,” he said.

We talked for half an hour. Lord Hartwell would not contemplate Winston at the helm, or even as his brother-in-law’s research assistant. Instead, he offered me that position. I declined.

The solution that was devised, at the frustrated urging of the American publishers, and on which I consulted Winston, for I would not have agreed to it without his approval—which he gave with good grace—was that, as Lord Hartwell wished, Freddie Birkenhead would be the official Churchill biographer, writing a single, popular volume based on the Churchill papers, and I would continue with Randolph’s multi-volume and companion volumes—of which Lord Hartwell had a very low opinion.

In the event, Winston wrote a biography of his father, just as his father and grandfather had both written biographies of their fathers.

In its obituary of Winston on 3 March 2010 The Times stated that “he was sometimes an action man.” This was indeed so. As a keen pilot, and a volunteer for the St John’s Ambulance Air Wing, he delivered many times, and always at short notice, human organs for transplant around Great Britain and Northern Ireland. On one occasion he flew a heart—together with a transplant team of doctors and nurses—to Germany. On another, despite severe icing, he and Minnie, on Boxing Day night, flew a kidney to Germany for a ten-year-old boy.

Winston was also a generous host to those in need: in 1972 he befriended the newly released Soviet dissident Vladimir Bukovsky, who stayed in his Sussex farmhouse for a year writing his book of memoirs.

In my own experience over forty-eight years, I never knew Winston to shy away from a cause he believed in, however forlorn that cause might seem, nowhere more so than when defending his grandfather with fierce determination from endless accusations. Two weeks before he died, with his enthusiastic support, I was able to draw on his pugnacious defence of his grandfather at Yalta for a presentation at Warsaw University.

Winston would certainly have produced a powerful and fearless biography of his grandfather, had Lord Hartwell not imposed his veto forty-two years ago.

Thank you to David Freeman, editor, Finest Hour for permission to post this.