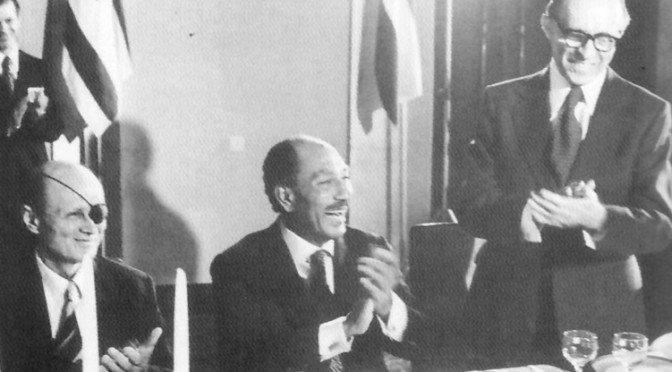 In the immediate aftermath of the Six Day War, a debate began inside Israel that was to continue:  how to rule, and for how long to rule … the Palestinian Arabs.  …  A few people argued with urgency that the West Bank and Gaza Strip ought to be given back as quickly as possible, that even a temporary occupation would hold grave disadvantages to the occupying power.  But these were very much minority voices.  The State was not yet twenty years old, yet its conquest of the West Bank and Gaza Strip seemed something that would last for a long time; and it was certainly to overshadow, and at times to dominate, all earlier purposes and ideals, and still to be a contentious and painful issue thirty years later.

In the immediate aftermath of the Six Day War, the Palestinian population behaved as if in a state of shock. It seemed amenable and cooperative to its new rulers, and there was a general feeling among Israelis that theirs was indeed an enlightened and benign occupation. Israelis were shocked to find how restrictive Jordanian rule had been, and how the Jordanians had very much relegated the West Bank to subordinate status within the Hashemite kingdom, neglecting its economy and failing to encourage its local institutions and aspirations.

If Jordan had not been a particularly forward-looking occupying power, despite its Arab, Muslim and even Palestinian affinities, Israel had confidence that it could be a benign occupier, capable of enhancing the prosperity of the whole region. In addition, to many Israelis, Moshe Dayan among them, for whom biblical locations and episodes were second nature, the West Bank was not just occupied land but part of the historic Land of Israel. Even if they had no desire to rule it indefinitely, or to annex it, they felt an affinity with it. Direct links abounded: Abraham, Issac and Jacob were buried in it (at Hebron), David ruled over it (at first from Bethlehem), two Jewish kingdoms had been established over it, in Judaea and Samaria.

Dayan, with his memories of the British Mandate, did not want a repetition of the bitterness of ruled against their rulers that he had seen intensified in the years before 1948 in the relationship between the Jews and the British.

In August 1988 Hamas published its covenant. The legitimacy of the PLO as the sole leader of the Palestinian people was rejected. Also rejected was the legitimacy of any permanent compromise that might be reached with Israel. The whole of Mandate Palestine, “from the sea to the river” was declared a Muslim endowment (Waqf). Holy war (Jihad) was to be conducted not only against Israel but against “corrupt and degenerate” elements in Palestinian society. This was not mere rhetoric: as well as Palestinians who had collaborated with Israel, or had worked for better relations with Israel, Palestinian drug dealers and prostitutes were among those punished – and often killed – by Hamas.

As well as Hamas, there was a splinter group from the Egyptian-based Muslim Brotherhood active in the Gaza Strip – Islamic Jihad. Its main objective was “instant military action” against Israel. The principal support for its terrorist activities came from Iran. One centre of its influence was in Hebron. Other Palestinian factions operated from Jordan and from the Sudan and from southern Lebanon (in conjunction with Hizbollah – the Party of God – some 5,000 fundamentalists who had been trained in Iranian-operated camps at Balbeck, 50 miles north of Beirut).

Israel is a country animated by resilience and hope. Shimon Peres, on becoming President, reflected in his acceptance speech on 16 July 2007:

“…The outstanding achievements of Israel in its sixty years, together with the courage, wisdom and creativity of our young generation, give birth to one clear conclusion: Israel had the strength to reach great prosperity and to become an exemplary State as commanded us by our prophets. Permit me to remain an optimist. Permit me to be a dreamer of his people. Permit me to present the sunny side of our State. And also, if sometimes the atmosphere is autumnal, and also if today, the day seems suddenly grey, the President who you have chosen will never tire of encouraging, awakening and reminding – because spring is waiting for us at the threshold. The spring will definitely come!”

The alternative, already often glimpsed, is too painful. But with renewed efforts, both Israeli and Palestinian leaders – and those who support them – seek to move forward to that hitherto elusive Final Status Agreement. A Palestinian State living in peace with its Israeli neighbour is essential if the region is to have the calm, prosperity and harmony that, after so many decades of conflict, all of its people so deserve. The State of Israel will have an even brighter future when there is peace across the whole of that ninety-mile-wide sliver of land between the Mediterranean Sea and the Jordan River: home to two separate national aspirations, and – when sanity and wisdom prevail – home also to two flourishing, vibrant, contented peoples.

Excerpts from Israel, A History