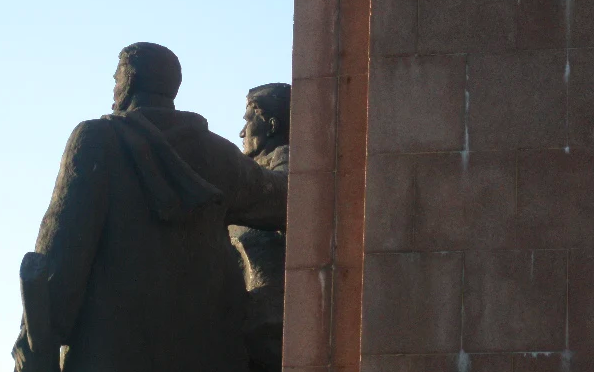 On April 1, in Berlin, Hitler moved his headquarters from the Chancellery building to a bunker system behind the Chancellery, and deep below it.  That same day, in Moscow, Stalin asked his commanders:  “Well, now, who is going to take Berlin, will we or the Allies?”, and he set April 16 as the day on which the Soviet campaign against the German capital should begin.  Also on April 1, in Hamburg, Himmler told the City Council that the disagreements among the Allies, as well as the imminent use of German jet aircraft in large numbers, would give Germany decisive breathing space.

No such breathing space, however, was to be allowed; the Western Allies, albeit with reluctance, agreed to make central Germany, and Czechoslovakia, their main target, allowing the Red Army to reach Berlin first.  As for the German jet aircraft, they were to be shot out of the skies.

As the Red Army prepared for its attack on Berlin, Soviet forces on the Danube front reached the Austrian border at Hegyeshalom, less than seventy miles from Vienna.  That same day, April 2, Soviet and Bulgarian troops captured Nagykanizsa, the centre of the Hungarian oil fields.  Germany’s last hope of an adequate fuel supply to make war was lost.  A counter-attack that day in the Ruhr, led by General Student, had to be postponed because of a lack of tank fuel; this fact was known to the Allies through Ultra.

Not only fuel oil, but essential medical supplies, were now virtually unobtainable within the dwindling confines of the Reich; on April 2 the head of Germany’s medical services, Dr Karl Brandt, warned Hitler personally that one-fifth of all medicines needed no longer existed, and that stocks of two-fifths would run out completely in two months.  But Hitler refused to accept even the possibility of surrender, and in a message to Field Marshal Kesselring, sent on April 2, he ordered the replacement of every commander in Italy who failed to stand firm.

In London, Churchill looked uneasily at the Soviet advance, and in particular at what was happening in Poland, where it had become clear that the free elections, promised by Stalin at Yalta less than three months earlier, would not take place.  As early as March 23, having read the reports from Averell Harriman in Moscow, Roosevelt had told a close friend:  “Averell is right.  We can’t do business with Stalin.  He has broken every one of the promises he made at Yalta.”  On April 2, Churchill telegraphed direct to General Eisenhower, suggesting that it might even be possible for the Western Allies to advance eastward to Berlin.  “I deem it highly important,” he wrote, “that we should shake hands with the Russians as far to the East as possible.”

… the political and ideological clash over Poland cast a dark cloud over the imminence of victory  “The changes in the Russian attitude and atmosphere since Yalta are grave,” Churchill wrote to the Chiefs of Staff Committee on April 3.  To the Dominion and Indian representatives who attended the War Cabinet in London that day, Churchill warned:  “Relations with Russia, which had offered such fair promise at the Crimea Conference, had grown less cordial during the ensuing weeks.  There had been grave difficulties over the Polish question; and it now seemed possible that Russia would not be willing to give full co-operation at the San Francisco Conference on the proposed new World Organization.  It was by no means clear that we could count on Russia as a beneficent influence in Europe or as a willing partner in maintaining the peace of the world.  Yet, at the end of the war, Russia would be left in a position of preponderant power and influence throughout the whole of Europe.”

In Britain and the United States, May 8 was VE-Day – Victory in Europe Day.  As both nations rejoiced, their cities were bedecked with flags and banners.  In the once captive capitals of Western Europe – The Hague, Brussels and Paris – there was a renewal of the excitement and relief of their days of liberation.  In Copenhagen and Oslo, the Germans laid down their arms.

At two in the afternoon of May 8, the German garrison at St Nazaire, on the Atlantic surrendered to the Americans.  … In Berlin, half an hour before midnight on May 8, a further signing took place of the Rheims surrender; the signatories for the German High Command being Grand Admiral von Friedeburg, signing his third instrument of surrender in four days ….

In Moscow, May 9 was Victory Day, welcomed by a salvo of a thousand guns.  “The age-long struggle of the Slav nations for their existence and independence,” Stalin declared in a radio broadcast that evening, “has ended in victory.  Your courage has defeated the Nazis.  The war is over.”