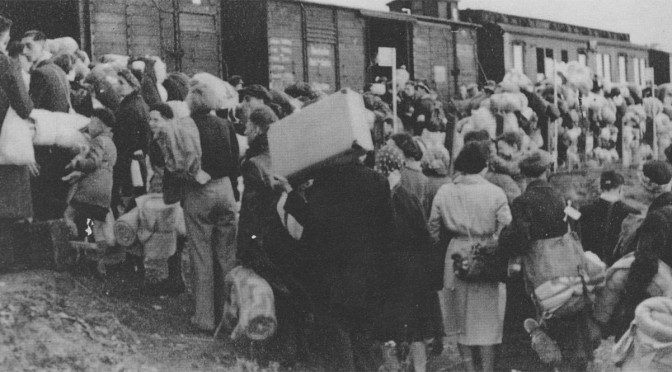 The list of countries presented by Eichmann to the Wannsee Conference, with the number of Jews whom it was intended to be deported to their deaths.

On 20 January 1942 thirteen senior Nazi and German officials met at a secluded lakeside villa on the shore of the Wannsee, a few miles from Berlin.  They had been summoned by the SS General Reinhard Heydrich, who told them that he had just been appointed “Plenipotentiary for the Preparation of the Final Solution of the European Jewish Question”.

The aim of the meeting, Heydrich explained, was to coordinate the work of Hitler’s Chancellery, the SS Race and Resettlement Office, the Ministry for the Occupied Eastern Territories, the Ministry of the Interior, the Justice Ministry, the Foreign Office and several other government departments.  Also brought into the discussion, having made the journey from Cracow by train, were senior officials of the General Government.

Heydrich told the meeting:  “In the course of the practical implementation of the Final Solution, Europe will be combed from east to west.”

Eichmann presented the gathering with a list of countries, setting out the number of Jews living in each, whom it was intended to deport to their deaths.  Estonia (Estland) was marked as being Judenfrei (Jew-free), as almost all Estonia’s 1,000 Jews had already been murdered.  There were two figures for France:  one for the area, including Paris, that had been occupied by Germany since June 1940.  The other, much larger figure, was for “Unoccupied France” still under French rule (with its capital at Vichy), which included the Jews of Morocco, Algeria and Tunisia.

During the meeting, Dr Josef Bühler, who had come to the meeting from Cracow, said:  “Jews should be removed from the domain of the General Government as fast as possible, because it is precisely here that the Jew constitutes a substantial danger as carrier of epidemics …. Moreover, the majority of the two and a half million Jews involved were not capable of work.”  Bühler then asked the meeting for “only one favour”, that “the Jewish question in this territory be solved as rapidly as possible.”

With the concluding of the meeting at Wannsee, which took less than a day, a new phase of the mass murder of Jews was about to begin.  To mass slaughter and starvation was to be added a third method of killing:  murder by poison gas.  Two months before Wannsee, 1,200 German political prisoners had been taken from Buchenwald concentration camp to the town of Bernberg, just south of Berlin.  There, at a euthanasia institute where thousands of Germans had already been murdered, the new arrivals were put to death by gas.”

Excerpt from Never Again, a History of the Holocaust

On January 20, Esther will be giving a programme of readings on the Wannsee Conference and its implications, through the Sir Martin Gilbert Learning Centre.  It will be on Zoom and free; register here: