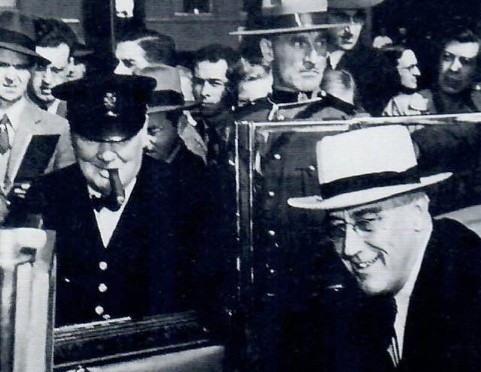 In 1944, as victory came closer, Churchill saw a bolder and brighter future for the Anglo-American relationship than victory alone. In a speech in London at the Royal Albert Hall on 23 November 1944, in celebration of American Thanksgiving Day, he spoke of how “in three or four years the United States has in sober fact become the greatest military, naval, and air power in the world – that, I say to you in this time of war, is itself the subject for profound thanksgiving.” But he also spoke of “a greater Thanksgiving Day, which still shines ahead, which beckons the bold and loyal and warm-hearted.”

That future Thanksgiving Day would be “when this union of action which has been forced upon us by our common hatred of tyranny, which we have maintained during these dark and fearful days, shall be come a lasting union of sympathy and good-feeling and loyalty and hope between all the British and American peoples, wherever they may dwell. Then, indeed,” Churchill declared, “there will be a Day of Thanksgiving, and one in which all the world will share.”

During the Second World War it is doubtful whether Britain could have sustained itself against the Nazi onslaught, or maintained itself at war, without Churchill’s almost daily efforts to win the United States to the British and Allied cause: first as a benign neutral providing vast amounts of war material, and then as an ally willing to put the defeat of Germany before that of Japan. When the Cold War began with the Soviet Union, Churchill told his Foreign Secretary, Anthony Eden: “The similarity and unity which we have with the United States will grow and it is indispensable to our safety.” To ensure that unity and safety, Churchill worked closely for the next decade with Presidents Harry S. Truman and Dwight D. Eisenhower.

Truman and Eisenhower were important in Churchill’s efforts to forge a common Anglo-American policy and theme, but no world leaders had such a long, constructive, intimate, frustrating, disputatious and affectionate relationship as Winston Churchill and Franklin Roosevelt. Churchill said of the President whom he met so many times and corresponded with so frequently over a period of five years: “I have wooed President Roosevelt as a man might woo a maid.” There were many quarrels, but, as Churchill once telegraphed to Roosevelt, using one of his favorite Latin quotations: “Amantium irae amoris integratio est.” When one of Churchill’s secretaries said she did not know what this meant, Churchill told her: “It means the wrath of lovers hots up their love.” Roosevelt’s staff translated the quotation for him somewhat more prosaically, and more accurately as “Lovers’ quarrels always go with true love.”

At the beginning of 1942, Churchill told King George VI that Britain and the United States “were now ‘married’ after many months of ‘walking out’. As with all close and sustained relationships, it was replete with ups and downs, uncertainties and disagreements, even anger, but its high points were sustained and remarkable, and of deep benefit to both nations. Churchill’s determination to maintain, repair, strengthen and make full use of the ties between the two countries is unique in the annals of Anglo-American relations.”

Excerpt from Churchill and America