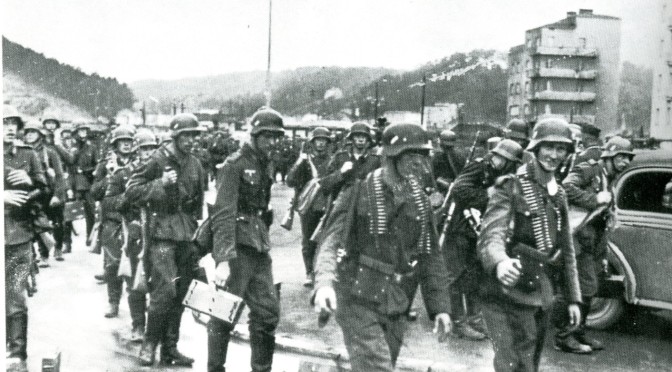 There can have been few more skilful cover-ups in British history than the story of the British Government’s efforts to force the Poles to give up territory to Germany on the very eve of the Second World War. When Neville Chamberlain, who had been at centre of these efforts, left the premiership in May 1940, there was strong political pressure for an inquiry into what had really happened. But Chamberlain’s successor, Winston Churchill dreaded the split in Britain’s national unity that such an inquiry would cause. Supporters of appeasement were still prominent in government.

Churchill’s political allies urged him to expose what Chamberlain had tried to do across the whole spectrum of appeasement. Churchill refused.  ‘I put all this on the shelf’, he told the House of Commons, ‘from which the historians, if they have time, will select their documents and tell their stories. We have to think of the future and not of the past.’ Churchill warned: ‘Of this I am quite sure, that if we open a quarrel between the past and the present, we shall find that we have lost the future.’

There would be no official, no-holds-barred inquiry into the previous ten years. Had there been, what truths would the inquiry would have uncovered? In 1938 Britain took the lead in coercing the Czechs to give up their Sudetenland region – with its rich mineral resources and strong military fortifications – to Germany. It was Chamberlain who, in the secrecy of a Cabinet committee, insisted that the Czechs would not be represented at the Munich Conference.

The German occupation of Prague in March 1939 gave the lie to Hitler’s claim at Munich that he had no further demands on Czechoslovakia. With Czechoslovakia no longer in existence, Britain gave a ‘guarantee’ to protect Poland’s independence. But this guarantee was not the end of appeasement, as Chamberlain explained in a private letter to his sister about the guarantee: ‘It was unprovocative in tone, but firm, clear but stressing the point (perceived alone by The Times) what we are concerned with is not the boundaries of States but attacks on their independence. And it is we who will judge whether this independence is threatened or not.’ That is, Poland’s boundaries could be changed to Germany’s advantage, provided Poland’s independence remained.

In April 1939 the Germans began to make claims on the Free City of Danzig (now the Polish city of Gdansk), then a predominantly German city. Chamberlain saw no reason why Danzig should not come within the orbit of Nazi Germany, and pressed Poland to open negotiations with Germany.

On August 25, Hitler told the British Ambassador in Berlin, Sir Nevile Henderson, that beyond the return of Danzig, Germany had no further quarrel with Poland, and that after ‘the solution of the German-Polish question’ he would give a personal pledge for the ‘continued existence’ of the British Empire. Hitler then became confidential, telling Henderson that he was ‘by nature an artist and not a politician, and once the Polish question was settled, he would end his life as an artist.’

Henderson informed the British Foreign Secretary Lord Halifax that he was impressed with Hitler’s ‘apparent earnestness and sincerity’. Halifax then asked Mussolini to tell Hitler that Britain was willing to put pressure on Poland to negotiate over Danzig.

To put Polish minds at ease, in August the British government turned its agreement of the previous March into a formal treaty. It immediately used the new treaty to press Poland even more firmly to give up Danzig. On August 28 Halifax telegraphed the British Ambassador in Warsaw: ‘His Majesty’s Government earnestly hope that Polish government will authorize them to inform German government that Poland is ready to enter at once into direct discussion with Germany.’

Hitler was not interested in British pressure on Poland to get him what he wanted. He saw the British position as one of weakness. On 1 September 1939, German forces entered Danzig and attacked Poland. In a final attempt to avoid honouring Britain’s treaty with Poland, Chamberlain the House of Commons on September 2 – as German troops advanced deep into Poland, and Warsaw was under intense air bombardment: ‘If the German Government should agree to withdraw their forces, then His Majesty’s Government would be willing to regard the position as being the same as it was before the German forces crossed the Polish frontier.’ Once German troops withdrew, Chamberlain promised, ‘the way would be open to discussions’ between Germany and Poland, and Britain was willing ‘to be associated’ in these discussions.

Parliament was in uproar. The Chief Whip feared that Conservative MPs would resort to physical violence against Chamberlain. That evening several members of the Cabinet, including the Secretary of State for War, Leslie Hore-Belisha, went to Downing Street to protest. Chamberlain and Halifax were dining together. The Ministers insisted they would not leave until Chamberlain agreed to honour Britain’s treaty with Poland and declare war on Germany without further delay.

Chamberlain bowed to this unprecedented revolt. Britain’s ultimatum to Germany, demanding that it withdraw from Poland at once, was sent to Berlin that night. It expired at 11 o’clock British time on the following day, September 3. Britain was at war with Germany.

The Cabinet revolt was unknown at the time. So too were Chamberlain’s efforts to make the Poles give up Danzig and other areas of western Poland claimed by Hitler. Even Churchill had no idea of the final gasp of Chamberlain’s appeasement policy. ‘History will be unkind to Neville Chamberlain’, Churchill once remarked. ‘I know, because I shall write it.’ But when writing the pre-war volume of his war memoirs, he had no access to the Cabinet records that would have given him chapter and verse. Only an inquiry of the type he had rejected could have done so.