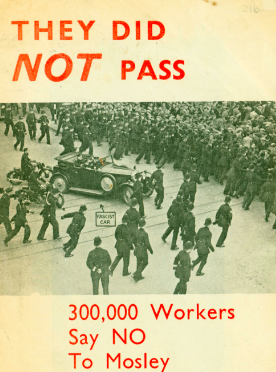 I was born on 25 October 1936, three weeks after the Battle of Cable Street, and therefore have no recollections of it. I have prepared an account of it from contemporary documents, the newspapers of the time, and the recollections of some of those who took part in it for my forthcoming book A History of the Jews of Britain:

In the last week of September 1936 the British Union of Fascists (the BUP) announced its intention to mount a show of strength in the East End of London on the afternoon of Sunday October 4. The aim was to intimidate the local Jewish community and the local anti-Fascist working class. Uniformed Fascists were to gather in military formation on the edge of the East End, to be reviewed by their leader Sir Oswald Mosley before marching through the East End to a mass rally in Victoria Park, Hackney.

News of the coming demonstration provoked enormous anger among both Jews and non-Jews in the East End, including the many members, Jewish and non-Jewish, of the British Communist Party. But the Communist Party leadership, under orders from Moscow, had another priority that week. Instead of preparing to confront the British Union of Fascists, the Communist Party urged its members and supporters to attend a Young Communist League rally in solidarity with the Spanish Republic, a rally that was to be held in Trafalgar Square on the same afternoon as the Fascist demonstration in the East End.

Joe Jacobs, Secretary of the Stepney Communist Party, was shocked by the prospect of the Communist Party refusing a show of strength and defiance. ‘The pressure from the people of Stepney,’ he later wrote, ‘who went ahead with their own efforts to oppose Mosley left no doubt in our minds that the CP would be finished in Stepney if this’ – the Mosley march – ‘was allowed to go through as planned by our London leaders.’

Posters went up throughout the East End calling on everyone to prevent the Fascist march from entering the East End. On October 1 the Communist Party Daily Worker reported the hatred expressed by East London workers for Mosley, one of whom was quoted as saying: ‘We must give them such a reception that they will not march down here again.’

By Friday October 2 it was clear that the Home Office had no intention of stopping the Mosley march. Only then did the Communist Party cancel the Trafalgar Square demonstration and call for mass opposition to the British Union of Fascists in the East End. Leaflets that had already been widely circulated, advertising the Trafalgar Square event, and calling for all ‘London Workers! Anti-Fascists! Peace-lovers!’ to gather at Temple Station on the Embankment at 2.30 p.m. were hastily overprinted: ‘Alteration! Rally to Aldgate 2 p.m.’.

The Independent Labour Party (the ILP) played a prominent part in rallying support for the anti-Fascist march. On Friday, October 2, an ILP meeting at Hackney Town Hall called for ‘an overwhelming demonstration against the Fascist march’. The ILP later announced ‘that it had called to the East End workers to mass in Aldgate in such numbers that the march would be impossible…. For hours at the Head Office duplicated copies of the leaflet were run off, and soon they were being distributed in thousands throughout East London.’ The London evening Star had a front-page headline that read: ‘ILP Call to the Workers’, and printed the ILP’s statement in full.

To the last moment there were calls to the Jews in the East End to avoid confrontation. On October 3 the Board of Deputies of British Jews denounced the Mosley march as anti-Semitic and called on all Jews to stay well away. The Jewish Chronicle warned: ‘Jews are urgently warned to keep away from the route of the Blackshirt march and from their meetings.’ The paper went on to explain its reasoning: ‘Jews who, however innocently, become involved in any possible disorders will be actively helping anti-Semitism and Jew-baiting. Unless you want to help the Jew baiters, keep away.’

The ‘Battle of Cable Street’ took place on Sunday 4 October 1936. Assembling in Royal Mint Street, near Tower Bridge, and intent on marching through the East End to a triumphal rally in Victoria Park, were five thousand uniformed British Union of Fascist marchers. The marchers were due to gather in Royal Mint Street at 2.30 p.m. ‘Hours beforehand,’ the Daily Worker reported, ‘every street between the Mint and Aldgate was thronged with people.’ The marchers formed up in military formation, a column of three thousand men stretching back for half a mile, with more than two hundred black-bloused women in the centre.

Facing them, and seeking to keep them out of the East End, were more than a hundred thousand anti-Fascists: local Jews, socialists, communists, anarchists, Irish dockers, miners from as far away as Wales and the North of England. More than 10,000 police, including 4,000 on horseback, prepared to clear the road so that the marchers could continue unmolested. As the marchers waited for their leader, and for the order to advance, they called out in unison: ‘The Yids, the Yids, we gotta get rid of the Yids’. They also chanted: ‘M-O-S-L-E-Y, we want Mosley’, to which the watching crowd shouted back, ‘So do we – dead or alive’.

Sir Oswald Mosley arrived for this climactic moment of his movement and his career in a black sports car at 3.40 p.m., an hour after he was expected to arrive, and ten minutes after the march had been due to set off. ‘Union Jacks on decorated poles rose in the air and a forest of hands above the black-coated ranks went up in salute,’ wrote the Daily Worker, as Sir Oswald, wearing the new Blackshirt uniform, with a peaked cap, drove down the ranks with two other officers of the movement.’

The marchers advanced along Royal Mint Street, in the direction of Whitechapel Road. They planned to march past Gardiner’s Corner, a department store in Aldgate, at the junction of Commercial Road and Whitechapel Road, known as the ‘Gateway to the East End’, but they did not get that far. A lone tram driver stopped his tram in the middle of the junction, blocking the Blackshirts’ way. The driver then got out and walked off. Barricades were erected in the side streets to stop the marchers advancing.

Fifteen-year-old Bill Fishman was at Gardiner’s Corner. He recalled seventy four years later: ‘There was masses of marching people. Young people, old people, all shouting “No Pasaran” and “One two three four five – we want Mosley, dead or alive.” It was like a massive army gathering, coming from all the side streets. Mosley was supposed to arrive at lunchtime but the hours were passing and he hadn’t come. Between 3 p.m. and 3.30 we could see a big army of Blackshirts marching towards the confluence of Commercial Road and Whitechapel Road. I pushed myself forward and because I was six foot I could see Mosley.’ He and his Blackshirt army ‘were surrounded by an even greater army of police. There was to be this great advance of the police force to get the Fascists through. Suddenly, the horses’ hooves were flying and the horses were falling down because the young kids were throwing marbles.’

Bill Fishman remembered how ‘thousands of policemen were sandwiched between the Blackshirts and the anti-Fascists. The latter were well organised and, through a mole, learned that the chief of police had told Mosley that his passage into the East End could be made through Cable Street. I heard this loudspeaker say: “They are going to Cable Street.” Suddenly a barricade was erected there and they put an old lorry in the middle of the road and old mattresses. The people up the top of the flats, mainly Irish Catholic women, were throwing rubbish on to the police. “We were all side-by-side.” I was moved to tears to see bearded Jews and Irish Catholic dockers standing up to stop Mosley. I shall never forget that as long as I live, how working-class people could get together to oppose the evil of racism.’

Fishman’s recollection is bornw out by the contemporary reports. ‘Barricades were built in the street,’ the Daily Worker reported, ‘and packing cases, a lorry and a couple of carts, to say nothing of the contents of a builder’s yard, were called into service to build it. Paving stones were torn up and broken into convenient sizes to serve as ammunition, glasses and bottles were broken and the splintered glass ground into the road to impede the passage of the Mounted Police. The police tried to stop these operations but were powerless to do so.’

Michael Sherbourne later recalled: ‘My three brothers and I were all there, at different points, I was at the Aldgate end of Mansell Street, faced by dozens of Mounted Police who were protecting the Fascists. We, many thousands of us, were all given bags of children’s marbles, and as the horsemen moved towards us, preparing to gallop, we scattered the marbles along the ground, which for the horses, was worse than an ice rink. Every horse, without exception, every one went down as soon as its hoofs touched the marbles, and of course took its rider with him. We had dockers, mostly Irishmen, came from London Docks, miners who came from Wales and the North of England, hundreds came from Scotland…’

After a series of running battles with the defenders, the Mosleyites failed to break into Cable Street. At that point, Sir Philip Game, the Police Commissioner, fearing serious bloodshed if the marchers continued their assault, ordered Mosley to call off the march. The Blackshirts then dispersed westward towards Hyde Park, while the anti-Fascists continued to battle with the police. In all, 150 of those who had sought to halt the march were arrested, and about a hundred were injured, including police, women and children. Some of the arrested were sentenced to hard labour.

The Battle of Cable Street was over. The men and women of the East End, Jews and non-Jews alike, had successfully held off a provocative march through their streets. Uniformed thugs had been repelled. But the efforts of the police to protect those thugs, and the ferocity with which the police acted against the defenders, left a legacy of hostility, and a foreboding that the Fascists could, and would, be allowed to return.

Read: The Routledge Atlas of the Arab-Israeli Conflict