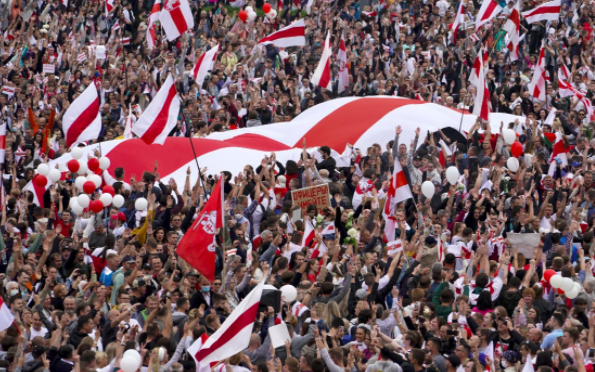 At the time of the collapse of the Tsarist empire at the end of the First World War there had been a brief but unsuccessful attempt by White Russia (Byelorussia) to assert its independence. Since then the region, apart from four years of the most savage German occupation, had been a loyal Soviet Republic, its capital, Minsk, indistinguishable from any other Russian city, its language almost identical to Russian, its nationalism dormant. But from the moment Lithuania, its neighbour to the north-west, had declared independence Byelorussian nationalism had re-emerged, and in April Minsk was brought to a halt by a general strike by Byelorussian nationalists calling for independence. The distance from the eastern border of Byelorussia to Moscow was only 270 miles, little more than the distance from Washington to New York.

On December 1, the people of the Ukraine cast their vote in a referendum for independence: ninety per cent voted in favour of total separation from the Soviet Union. On December 8, the leaders of three Soviet Republics, Russia, Belarus and Ukraine – the heartlands of the Soviet Union – met in Minsk and agreed to establish a Commonwealth of Independent States (CIS) and declared the “end” of the Union of Soviet Socialist Republics – the USSR, or Soviet Union – which had been a central feature of world power for so many years. They then appealed to the other former Republics to join the CIS.

On December 26 the Supreme Soviet, which had ruled the Soviet Union since 1917, met in Moscow and dissolved itself. Four days later the leaders of the CIS met in Minsk and affirmed the right of each member State to establish its own armed forces.

In the Republic of Belarus, the revolutionary changes of five years earlier were being reversed. On November 24, as a result of a referendum, President Lukashenko was granted dictatorial powers. The British journalist Richard Beeston was an eye-witness that day in the capital, Minsk, reporting to The Times:

“Thousands of demonstrators, including communists, nationalists and democrats, braved the first snowfall of the winter to protest against the mercurial leader outside the capital’s parliament building, until now the centre of opposition to his rule. However, the rally eventually dispersed quietly as it dawned on the opposition that their battle was lost.

“’I am voting against Lukashenko because he is dangerous and powerful and will hurt our country,’ Sergei Urban, a businessman, said. ‘Unfortunately, I know he will win.’”

As a result of the referendum, Lukashenko, who was already in control of the army, the security services and the media, obtained the right to appoint half the members of the constitutional court, and many of the deputies in the new parliament. In the Communist era, he had been the director of a collective farm.

The Warsaw Pact nations of Eastern Europe, once a bastion of Soviet power, were being drawn into the NATO orbit. NATO itself had completed a year of military activity in Bosnia, acting as a shield of the Sarajevo government against Bosnian Serb attacks. In seeking to extend the borders of NATO-land as far east as the Russian, Belarus and Ukrainian borders, on May 2 the United States Senate ratified what was known as NATO “enlargement”, to include Poland, Hungary and the Czech Republic in the following year. By this vote, the United States became the fourth NATO country to support enlargement: the others were Germany, Canada, Denmark and Norway. In welcoming this decision, President Clinton said that the expansion of NATO would reduce the prospect of Americans ever being called again “to fight in the battlefields of Europe”.

The eastward enlargement effectively redrew Europe’s former Cold War boundaries, pushing NATO to the borders of Russia, and committing British, American and other NATO forces to the defence of the three former Warsaw Pact countries. Within the Senate, there had been opposition from ten Democrats and nine Republicans, who claimed that the treaty would reverse the post-Cold War democratic process in Russia, stretch the NATO alliance to breaking point, cost the American taxpayer billions of dollars, and push American soldiers into unwelcome peacekeeping missions. But isolationism, however well argued, was unable to gain anything approaching a majority vote.….

That December there was news of efforts being made in Russia for reunification with Belarus, one of the former Soviet Republics, and Russia’s western neighbour. “We are now calling for merging our nations in one Union State,” Yeltsin explained after signing a Christmas Day agreement with the Belarus leader Alexander Lukashenko. Whether these two or any other of the fifteen former Soviet Republics would merge their sovereignties was not, however, either certain or in the realm of probability. Belarus, the closest to Russia linguistically and historically, was the one possible exception: its parliamentarians were pressing for the same national anthem as Russia, and a new name for their relationship, the Union of Sovereign Republics, nostalgically echoing the former Union of Soviet Socialist Republics.

For more on the situation in Belarus from a UK-based charity that works with Jewish communities there, see https://thetogetherplan.com/changing-political-landscape/