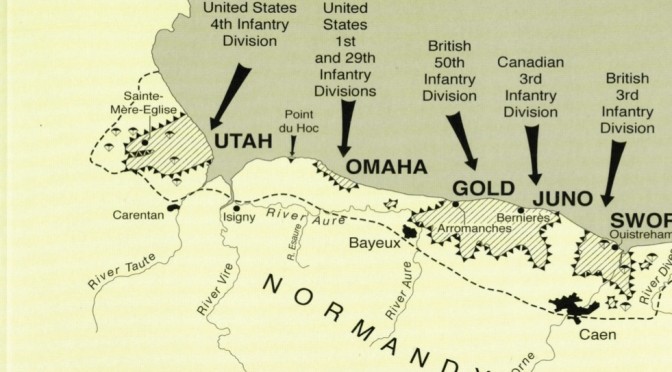 Oysters were the secret weapon with which Hitler might have triumphed on D-Day. Not the succulent variety to be eaten on the half-shell, but a devastating mine — code-named Oyster by the Allies — that could not be sunk: an unscupperable mine that revealed a German technology far more advanced than the Allied mines. Fortunately for the Allies, this devilish mine was not ready on June 6, 1944, in sufficient numbers to prevent the landing.

A few of these Oyster mines, laid secretly off the Normandy beaches after D-Day, caused grave inconvenience by forcing ships to limit their speed to one knot to avoid detonating them. Had Hitler’s scientists moved more quickly, these mines would have been available in their thousands, even tens of thousands, as a virtually impenetrable barrier to the Allied armada on the morning of June 6.

The Oyster was one small example of the perils that made the failure of the Normandy landings a grave possibility for the British and American planners. They had agreed almost a year earlier that if the Germans were able to get numerically superior forces to the beachhead, then the whole plan would have to be abandoned.

To prevent this, a series of deceptions was put in place to persuade the German High Command to hold as many as half a million troops elsewhere, and to keep them there even after the landings.

At any moment up to June 6, if the Germans had seen through these deceptions, and transferred these half million men to Normandy, the landings would have been abandoned. But the success of the deceptions was total.

One vast bogus Allied army based, the Germans were convinced, in Scotland, led to troops being kept in Norway to await them. A second bogus army, known as the First United States Army Group (FUSAG), kept German forces in the Calais area long after they were desperately needed in Normandy.

As late as June 26, when more than half a million Allied soldiers were ashore in Normandy, the German High Command still believed that the First United States Army Group was a serious and imminent threat, ready to embark for the Calais coast, and even larger than the forces already in Normandy.

A month later, on July 24, Hitler was still apprehensive of a second major Allied landing. As a result, no considerable transfer of German troops was made from the Calais area and strong forces continued to be held back.

The most dangerous moment for the Allies of the whole preparatory period came five weeks before the landings, when the secrecy of their locations was suddenly endangered. Seven German motor torpedo boats chanced upon an American practice landing on April 28 and more than 600 American soldiers were drowned. This was tragic; but the real danger was that ten of the American officers who drowned were aware of the actual landing place. If only one of those ten had been picked up at sea by the Germans and revealed the true destination under torture, the whole enterprise would have had to be abandoned. A massive search was therefore begun in the Channel to recover each of the ten bodies. Although more than 100 of the drowned Americans were never recovered from the sea, the bodies of all ten officers in the know were found. The secret of Normandy was safe, and the final preparations could go ahead.

Few operations of war have been so beset by uncertainty as the Normandy landings. The German potential to create havoc both during and after the landings was enormous but their plans were undercut time and again by a British secret weapon far more lethal — to Germany — than any German weapon was for the Allies. This was Enigma: the daily reading — at Bletchley Park north of London — of hundreds, even thousands, of Germany’s top secret radio communications.

On an hourly basis, these codebreakers averted disaster and defeat. Three weeks before the landings, the codebreakers learnt that the Germans did not believe that the Allies would be ready to invade “for some time”.

On the following day they decrypted a top secret message from Rommel that the Allied bombing of German railways throughout northern France was beginning to disrupt the movement of his supplies and troops.

The Germans planned to build a series of bogus airfields to divert the Allied bombers away from real targets. But Goering’s top-secret order for these was decrypted at Bletchley, and the bogus airfields were built in vain.

The Americans had planned their main parachute drop of the 82nd Airborne Division at La Haye-du-Puits, to give protection for the landings troops. The preparations were all but completed when the codebreakers decrypted a series of German orders, for the immediate transfer of three German divisions to the very area of the parachute landings. The Germans had no idea that they had stumbled upon the exact landing area. With only nine days to go and with considerable difficulty, the Americans switched the dropping zone to an area 12 miles away, around Sainte Mère-Église. Disaster had been averted.

But the margin between success and failure remained tiny. Somewhere in northern France the Allies knew there was the headquarters of the German Signals Intelligence Service for the Normandy area. Once the Allied signals began to intensify, as the time for the landings drew closer, the German listeners, even if they could not decode any of this traffic (and they could not), would realise that something was imminent. How could the German listeners be put off the scent? The answer came on the night of June 3, after the codebreakers at Bletchley Park had identified, from the Germans’ own radio message, the location of the German radio intercept station. It was at Urville Hague, on the coast west of Cherbourg. Steps were taken at once. A British bombing raid was mounted, and, in the words of the head of the bomber forces, Air Marshal Leigh-Mallory, the German intercept station was “wiped off the map”. The Allies could send their increased radio signals knowing that no German listener would be able to draw any conclusions from them — let alone the correct conclusion, that the flotilla was on its way.

Twenty-four hours later, as the Allied naval armada made its way towards Normandy, the codebreakers at Bletchley read the order to 36 German U-boats in the Atlantic to move at once into the Channel and attack and sink the invasion forces. Twenty-one Allied air squadrons (including a Czech squadron) were at once ordered into action, and the U-boat threat was averted. When, 24 hours after the landings, the Germans ordered a concentrated bomber attack on the cross-Channel shipping, danger again loomed. Once again the orders were decoded and before the German bombers took off, RAF planes attacked the main German Air Force base outside Bordeaux, and the threatened air armada was pulverised on the ground.

There was one final and potentially fatal gap in the Allied defences: the ability of the Germans to eavesdrop on the telephone conversations between Churchill and Roosevelt. On May 5, a month before D-Day, the two leaders had discussed the imminent landings. But both men understood the need for secrecy, and the German listeners could gain nothing of any value. Particularly galling to those who were so thrilled at being able to listen in to the Allied leaders were Roosevelt’s final words to Churchill: “Well, we will do our best — now I’ll go fishing.”

Failure on D-day remained a possibility until the last minute. On the morning before the landings, Eisenhower prepared a statement — stark in its finality — that read: “Our landings in the Cherbourg-Havre area have failed to gain a satisfactory foothold and I have withdrawn the troops. My decision to attack at this time and place was based upon the best information available. The troops, the Air and the Navy did all that bravery and devotion could do. If any blame or fault attaches to the attempt it is mine alone.”

No such message had to published. But, as the Duke of Wellington admitted after the Battle of Waterloo, it had been “a close-run thing”.