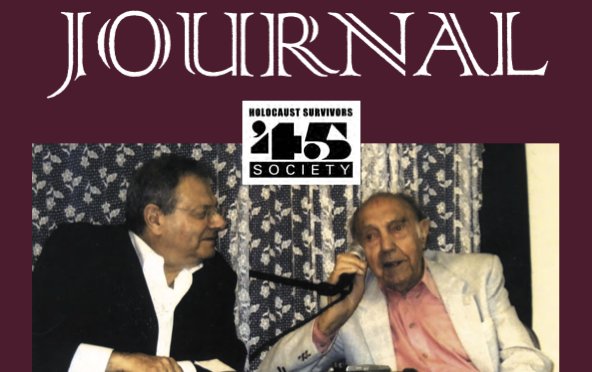 Photo: Sir Martin interviewing the late Yogi Mayer, a friend and mentor to many of The Boys as they acclimated to life in Britain after the war. Used by permission from the ’45 Aid Society

It is always a pleasure to write a few words of introduction to the Journal.  It is now almost thirty years since the first issue was published, edited by Kurt Klappholz, whom we all remember with affection.

In the past few years a number of you have published your memoirs.  This is most welcome, as the educational aspect of teaching the Holocaust spreads through Britain and many other countries.  Holocaust Memorial Day is now an established educational force in Britain.  The International Task Force for Holocaust Education, of which Ben Helfgott is an active member, is involved in educational work in twenty-four countries.  That number is growing.

Among those of you whose memoirs have been published recently are Jack Klajman (Out of the Ghetto), Issy Hahn (A Life Sentence of Memories), Sidney Finkel (Sevek and the Holocaust:  The Boy who Refused to Die) and Roman Halter (Romek).  Jack Kagan, whose memoirs Surviving the Holocaust with Russian Jewish Partisans were published six years ago, has now edited a major work on the history of his hometown, Novogrudek, entitled Novogrudek:  The History of a Shtetl.

The more memoirs, the better.  As your President, who has written your collective story I welcome the publication of as many of your individual stories as possible.

This issue of the Journal will give pleasure to all of you, and, as your President, to me as well.  Once more, Ben Helfgott is to be congratulated that – among his many onerous and important commitments, including as a Vice-President of the Claims Conference, which has done so much for survivors – he has found the time to prepare such a readable work.

The ’45 Aid Society has now launched an extensive online archive of the lives and experiences of their parents and grandparents, collectively known as “The Boys”.  The new addition to the website gives background information for each of the 732 surviving children who came to Britain: 45aid.org