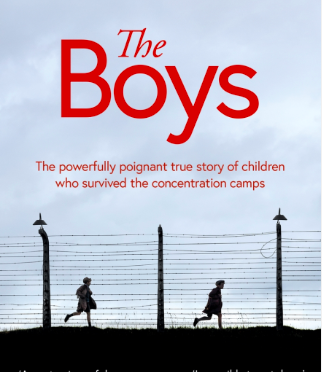 Fewer than 100,000 Jews survived the death camps, slave labour camps and death marches of Hitler’s Reich.  This book is about 732 of those survivors; most of them boys, about eighty of them girls.  What these particular 732 have in common, apart from their wartime experiences, is the journey they made together, after liberation, from Europe to Britain.  They travelled under the auspices of the Central British Fund, a Jewish organisation which had been active in helping refugees since the rise of Hitler in 1933.

The first group of the 732 were flown from Prague to Carlisle in August 1945, the second from Munich to Southampton.  A third group was flown some months later from Prague to various places in Britain.  Later all three groups were sent to residential hostels throughout Britain.

Most of those who were brought to Britain under this scheme were in their middle to late teens.  All but a dozen of them had lost their parents, as well as brothers and sisters, murdered between 1939 and 1945, usually in circumstances of the utmost savagery.  Almost all of the youngsters had been trapped by the war from the very first days of the German invasion of Poland on 1 September 1939.  “I was eleven years old when the war broke out and the nightmare began,”  Henry Golde later wrote.  “I would say that at the age of eleven I became an adult, and five years later I became an old man.  That is what I and countless others like me have seen and were forced to live through.  Most people will never experience what we did, even if they live to a very old age.”

All of the 732 “boys” as they call themselves – and this includes the girls among them – had seen death at close quarters.  Many of them had seen their parents, or brothers and sisters, killed before their eyes, or taken away to a death camp at the time of the deportations from the ghettos.  Today, these “boys”, whom I shall refer to in this book without quotation marks, form a group of friends whose companionship is deeply rooted in appalling common memories.  A few of them were friends from their pre-war childhood.  Some had first met in the ghettos and slave labour camps.  Most became friends after their arrival in Britain.  Today they are banded together under the auspices of their own charitable organisation, the ’45 Aid Society, named after the year in which the first of them came to Britain.  Other survivors, who came to Britain later, were drawn to the society for the comradeship which it provided.

The reason there were so few girls among the youngsters brought from Prague is that it was much harder for girls to survive.  At each deportation from the ghettos, a few boys under sixteen were selected for slave labour; almost all the girls of a similar age were sent with their parents to the death camps, where all the deportees were murdered.  Girls under sixteen who did survive were mostly those who had managed to go into hiding, and were not betrayed.  In Poland, this meant hiding for two or three years.

Each year the boys meet for various events, the highlight being their annual reunion to commemorate their liberation; to celebrate their rebirth after their almost inconceivable ordeals.  At their reunions, while rejoicing in their daily life, they also recall old times:  the years before the war when they enjoyed childhood, the war years when both their childhood and their family life were violently interrupted and destroyed, and their rehabilitation in Britain.  This book tells their story, as recounted to me in letters and conversations, or in articles published since 1976 in their journal, Journal of the ’45 Aid Society.  … Every account that I received contained aspects of the Holocaust that are not to be found elsewhere:  episodes, attitudes and reflections.

I have a personal reason for writing this book.  It is twenty-two years since I first met Rabbi Hugo Gryn, a survivor of Auschwitz, and one of those whose story is told in this book.  Not only did he encourage me to devote time to recording the fate of the Jews during the Second World War, he also introduced me to the members of the ’45 Aid Society, of which he was a part.  His death in the summer of 1996 was a blow to all who knew and loved him.

From the Introduction to The Boys

The ’45 Aid Society, is now continued by the children and grandchildren of the boys.

Read:  The new edition of The Boys