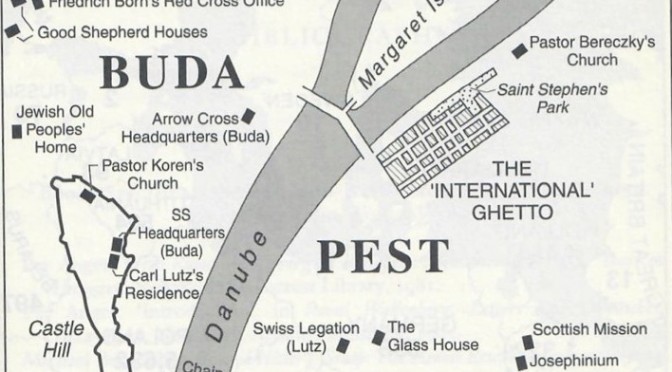 Photo: BUDAPEST MAP From The Righteous

June 27: Hungary enters the war on the side of Germany.

April 17: The Hungarian Regent, Admiral Horthy, refuses Hitler’s personal request, at Salzburg, to allow the 437,000 Jews of Hungary to be deported to the death camps.

July 2: Horthy agrees to German request for 3,000 Jewish forced labourers to work in the Bor copper mines, in German-occupied Serbia. But his refusal to deport Hungary’s 437,000 Jews to the death camps remains. 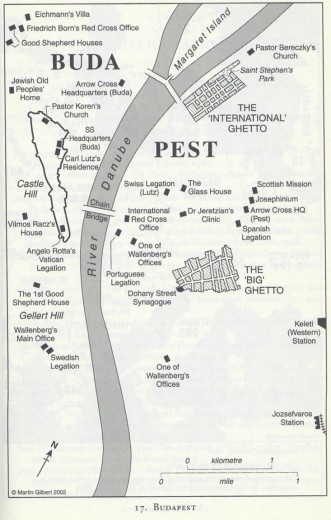 BUDAPEST MAP From The Righteous

March 14: British-trained Palestinian parachutists, among them Budapest-born Hana Szenes, parachute into Yugoslavia. They make their way to the Hungarian border, but arrive too late (after the German occupation).

March 19: German troops enter Hungary, as does Eichmann and his SS “Commando” (Judenkommando).

March 22: A new government comes to power in Hungary, under German control.

April 5: Jews obliged to wear a yellow star on their clothing.

April 7: Jews forbidden to travel by car. No Jews allowed on the streets after 8 p.m. Shortly afterwards, all telephones and bicycles are confiscated.

April 7: Rudolf Vrba and Alfred Wetzler, two Slovak Jews, escape from Auschwitz, determined to get the news of the mass murder and gassing there – most recently of Czech, French and Dutch Jews – to the West.

April: The Jews of Hungary’s provinces are put into ghettos.

May 3: “Christian” Jews in Budapest are allowed to wear a small white cross under their yellow star.

May 15: Hungarian Institute for the Research of the Jewish Question is opened in Budapest, on the Nazi model – to study a community that will no longer exist except in museums. The deportation of Jews from the Hungarian provinces, including Carpathia and Transylvania, begins. The Papal Nuncio, Angelo Rotta, protests at the deportations.

May 27: Czeslaw Mordowicz and Arnost Rosin, witnesses of the first ten days of the mass murder of Hungarian Jews at Auschwitz, escape from Auschwitz, and make their way to Slovakia.

June 21: Christian clergymen in Budapest are criticized by the Hungarian Ministry of the Interior for saving Jews by issuing false baptismal certificates.

June 24: 1,835 apartments designated “Yellow Star” houses (Eichmann originally agreed to 2,600) and 19,000 Jewish apartments vacated and their inhabitants moved to Yellow Star houses. These were set up instead of a ghetto, and as a prelude to deportation. The original three days’ notice for moving was extended to six.

June 26: As further details reach the West of the fate of the deported Jews from Hungary, thanks to the Vrba-Wetzler and Mordowicz-Rosin (escapees) reports – the Auschwitz Report – President Roosevelt warns Horthy he will be held responsible for atrocities committed against Jews.

June 26: From Switzerland, a British diplomat, having read the full text of the Vrba-Wetzler and Mordowicz-Rosin (escapees) reports – the Auschwitz Report – smuggled to Switzerland from Slovakia, suggests bombing government buildings in Budapest, giving exact and correct street and house numbers, as a warning against further deportations. The suggestion is sent un-coded, so that the Hungarian secret service will read it, which it does.

June 29: The German Embassy protests, in vain, to Berlin about the protective documents – emigration certificates – being issued by the Swiss Embassy (Carl Lutz) for 7,800 individuals.

July 2: American bombing raid on Budapest, many buildings hit, in error, that were outside the target, frightening Horthy that this is the Allied retribution which was proposed on June 26.

July 3: The 12,000 Jews of Ujpest, a suburb of Budapest, deported to Auschwitz from Bekasmegyer station.

July 4: Horthy tells SS General Veesenmayer the deportations must stop, citing protests to this end from the Vatican, the King of Sweden and the International Red Cross.

July 6: On Horthy’s orders, the imminent round-up and deportation of Budapest Jews to Auschwitz, planned by Eichmann, is suspended. 1,180 Jews deported to Auschwitz from the southern Hungarian city of Pecs. The Hungarian Prime Minister, Dome Sztojay, summons SS General Veesenmayer and tells him that Horthy has ordered a halt to all further deportations to Auschwitz.

July 8: Final deportations to Auschwitz, from the Bekasmegyer local train station, of Jews from towns near Budapest (Kispest, Ujpest, Pestszenterzsebet); and of Jews from Budapest who had already been assembled at Punkosdfurdo local railway station, the Monor brickyard, and Csepel. This ends the deportation to Auschwitz, a total of more than 437,000 Jews, in 147 trains.

July 11: The Mayor of Budapest offers privileges for Jews who had converted to Christianity before 1 August 1941.

July 19: After a four-day struggle, Eichmann evades Horthy’s order to halt deportations with one final train, 1,050 Jews from the Kistarcsa detention centre, some fifteen miles from Budapest, and 500 Jews from the Rökk Szilárd street prison (former Rabbinical Seminary).

July 24: The Swiss Embassy’s protection is extended to the Glass House on Vadász Street.

July 30: Tisha b’Av services (mourning the destruction of the Temple) are held in the Dohany Street synagogue.

August 19: Eichmann requests permission of the Hungarian government to begin the deportation of 100,000 Budapest Jews on the following day. The Papal Nuncio, Angelo Rotta, and the neutral ambassadors, protest to Horthy. The deportations do not take place.

August 24: Eichmann’s Budapest office closes down at the request of the new head of the Hungarian government, Geza Lakatos.

September 7: All Jewish men over fourteen made liable for forced labour, for the defence of Budapest. Foreign embassies begin distributing protective documents.

September 18: Jewish New Year. A sense of calm and even of security prevails.

September 23: The International Red Cross takes over the Columbus Street refugee camp from the SS.

September 28: Day of Atonement. The evening curfew on Jews suspended to allow them to attend synagogue services.

October 15: The Arrow Cross seizes power. Lakatos and Horthy are dismissed. Ferenc Szálasi appoints himself “Leader of the Nation”. Arrow Cross men fire at random into Wesselenyi 44, a protected house, and former Jewish school. A Jew picked up at the corner of Csengery and Aradi Streets is shot. Jewish armed resistance at Magdolna and Dobozi streets.

October 17: A hundred Jews shot, many along the Danube bank or on the bridges. Then 25-30 are shot each day.   The Rumbach and Dohany Street synagogues designated “Concentration Camps”, 6,000 Jews interned there. Jews forbidden to go out on the streets. Those who do so and are caught, and those who, on Teleki Square, try to resist arrest, are taken to the Tattersall racetrack. Eichmann returns to Budapest.

October 26: The Hungarian Minister of Defence agrees to Eichmann’s request to deport Jews to Germany for forced labour. 25,000 men and 10,000 women are rounded up in a week, most sent on foot towards the Austrian border at Hegyeshalom.

October 28: Arrow Cross seize – and kill at dawn on the following day – the Roman Catholic priest Ferenc Kallo, who had been helping Jews with life-saving documents.

November: Jews not allowed to be in the streets except between 10 and 12 in the morning, a twenty-two hour curfew.

November 4: The Police Chief of Budapest intervenes to save 90 elderly residents of the Old People’s Home on the corner of Varosmajor and Alma Streets, from being murdered by the Arrow Cross (see also November 11).

November 5: Arrow Cross officials gather Jews in the brickworks in the north of Budapest, Becsi Street, for deportation to Austria.

November 8: A major “death march” leaves Pest for the Austrian border and Strasshof camp near Vienna. Hana Szenes’s mother is on this march. They march 18-20 miles a day, via Komarom, where she escapes.

November 11: The Swiss Red Cross chief in Budapest, Friedrich Born, intervenes personally to save 90 elderly residents of the Old People’s Home on the corner of Varosmajor and Alma Streets from being murdered by the Arrow Cross. This is the second time they have been saved (see November 4). They were murdered on 19 January 1945, among the very last Jewish victims.

November 15: The Hungarian government establishes the “Big” ghetto, between Wesseleny and Dob Streets. Jews with protective documents go to Red Cross, Swedish, Swiss, Vatican, Spanish and other protected houses in the International Ghetto, in and around Pozsonyi Street.

November 16: Arrow Cross raid on Teleki Square. Many Jews in hiding seized and taken to the brickworks. The International Red Cross, the Swedish Embassy (Wallenberg) and Hungarian army officers bring documents that enable some to leave.

November 21:   Deportations to Ravensbruck north of Berlin, and Mauthausen near Linz, begin, by train, from Józsefváros station. More than 3,000 Budapest Jews were murdered in Mauthausen. The 40-year-old Budapest poet and journalist Géza Havas died a few hours before liberation, at Gunskirchen, a subcamp of Mauthausen.

November 23: The first of what quickly became daily executions of Jews on the Danube embankments. Wallenberg goes to Józsefváros railway station with protective documents.

November 23-37: International Red Cross representatives go on an inspection to the line of march of the November 8 Budapest-Strasshof marchers, issuing as many protective documents as they can. Wallenberg went by car as far as the Austrian border to bring documents to these marchers.

December 22: The last “death march”, on foot: 1,200 Jews who were being held in a detention barracks near Teleki Square are sent towards Austria.

December 23: The neutral Ambassadors, Swiss, Portuguese, Spanish and Swedish, and the Papal Nuncio Angelo Rotta, shortly before being evacuated from Budapest on the eve of the coming battle, issue a joint protest, from Rotta’s residence on Castle Hill, against the seizure of Jewish children from their safe houses and their despatch into the ghetto. Lutz and Wallenberg remain in the city.

December 24: A series of Arrow Cross raids on Jewish places of refuge outside the ghetto, especially children’s homes.

December 24: Wallenberg goes to Józsefváros railway station, for a fourth time, with protective documents. It is the last deportation train from Budapest to Austria. Wallenberg manages to have it halted after it had left the platform, and gets people off it.

December 27: A group of Jewish women shot dead by the Arrow Cross near the Szabadsag bridge. This marks the intensification of the killing of Jews by the Arrow Cross, even raiding protected houses in search of victims.

December 30: The Arrow Cross take several young women from the Jewish hospital at 2 Bethlen Gabor Street to the Girls School of Commerce in Wesselenyi Street, and shoot them.

December 30: Andrassy Street is the scene of a march of 170 Jews from the International Ghetto who are marched to the Danube and 50 are killed. 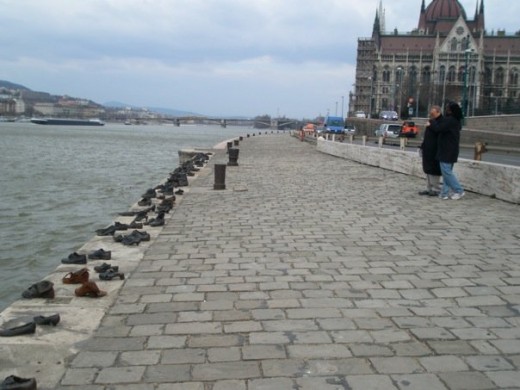 THE RIVER MEMORIAL. Martin and the filmmaker Michael King, on the right, overlook the “shoe memorial” in honour of Jews who were shot into the Danube; the Hungarian Parliament building in the background, March 2009.

January 1: Otto Komoly, the Jewish organizer of rescue activities, and Arthur Weiss, who helped shelter his fellow-Jews in the Glass House are killed by the Arrow Cross into the Danube.

January 4: The Arrow Cross begin systematic raids in the International Ghetto and drive Jews from the protected houses – including all those on the even-numbered side of Pozsonyi Street, to the nearby bank of the Danube, where they kill them.

January 8: 266 Jews who had taken refuge at the Swedish Embassy food supply building at 1 Jokai street taken out by the Arrow Cross and murdered.

January 8: Wallenberg intervenes successfully to save 161 people who had been hiding in the Swedish Humanitarian Office at 4 Ulloi Street from being executed when they were taken away to the Danube by Arrow Cross men.

January 12: Learning of a planned Arrow Cross massacre of all the Jews in the ghetto, Wallenberg persuades the German officer commanding in Budapest, General Schmidthuber, to prevent it. 92 doctors, nurses and patients killed by the Arrow Cross at the Maros Street hospital.

January 17: Wallenberg seen in Budapest for the last time.

January 19: In a section of the city still under Arrow Cross control, 90 elderly residents of the Old People’s Home on the corner of Varosmajor and Alma Streets are murdered.

January 20: As fighting continues in the city, the hospital at 44 Wesselenyi is hit by an artillery shell, and many doctors, nurses and patients killed.

January 21: Budapest is finally liberated. That day, all anti-Jewish laws are rescinded by the Budapest National Committee.