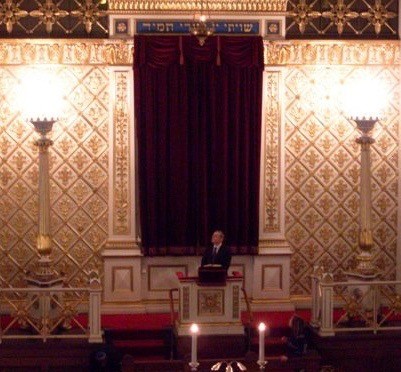 … growing Danish resistance to the German occupations slowly undermined any chance of continued co-operation, and on 28 August 1943 the Germans declared martial law.

The SS hoped to use this opportunity to deport Denmark’s Jews. They were forestalled by the actions of a German diplomat, Georg Ferdinand Duckwitz, who had joined the Nazi Party in 1933 and been posted to Denmark before the German conquest by German military intelligence. … Learning of the deportation plans on 11 September 1943. Duckwitz flew to Berlin two days later to try to have the plan set aside, but was told it had already been approved by Hitler. On September 25 he flew to the Swedish capital, Stockholm, saw the Swedish Prime Minister Per Albin Hansson, and discussed with him the possibility of Denmark’s Jews being smuggled across the narrow belt of water to Sweden. Returning to Copenhagen on September 28, Duckwitz passed on details of the imminent deportation, and the possibility of a safe haven in Sweden ….

Forewarned of the planned deportation, Danes and Jews took immediate action, as did Per Albin Hansson, who had promised Duckwitz that the Swedish government would help in the effort to rescue Denmark’s Jews. As Leni Yahil, the historian of the rescue of Danish Jewry, has written, “all groups of the Danish population went into action in order to save the Jews. Dozens of protests poured into the offices of German authorities from Danish economic and social organisations; King Christian X expressed his firm objection to the Germans plans; the heads of the Danish churches published a strong protest and used their pulpits to urge the Danish people to help the Jews; and the universities closed down for a week, with the students lending a hand in the rescue operation. The operation went on for three weeks, and in its course all 7,200 Jews and some 700 non-Jewish relatives of theirs were taken to Sweden. The costs of the operation were borne partly by the Jews themselves and to a large extent by contributions made by the Danes. The Danish resistance movement grew in size and strength as a result of the successful rescue effort and was able to keep open a fairly reliable escape route to Sweden. When Rolf Gunther, Adolf Eichmann’s deputy, travelled from Berlin to Copenhagen to organise the deportation of the Jews, the Danish police not only refused to co-operate with him but issued an order prohibiting German police from breaking into apartments in order to arrest Jews. The Germans did not have the personnel to enforce martial law.

On 1 October 1943, the second day of the Jewish New Year, the Germans found only five hundred Jews remaining in Denmark. All were sent to Theresienstadt; of them, 423 survived the war. On 14 April 1945 the Swedish Red Cross negotiated their release.

The Danish Jews who had been ferried to Sweden survived the war unmolested, as did a further three thousand Jewish refugees who had reached Sweden before the outbreak of war, from Germany, Austria and Czechoslovakia. Reflecting on the rescue of so many Jews in such a short time by a whole nation acting in unison, the historian Leni Yahil concludes: “The Danish people’s resolute refusal to discriminate against their fellow Jewish citizens and to surrender them, or the refugees among them, to the Germans; the rescue launched to transfer the Jews to a safe haven in Sweden; and the unwavering support and protection they gave to the Theresienstadt deportees – all represent an exercise of high moral and political responsibility, outstanding and exceptional for the time in which it took place.”

Note: The Danish Underground were honoured as a group for their rescue efforts, with a tree planted in the Avenue of the Righteous in Yad Vashem in Israel.

An excerpt from The Righteous: Unsung Heroes of the Holocaust  ©Martin Gilbert 2004