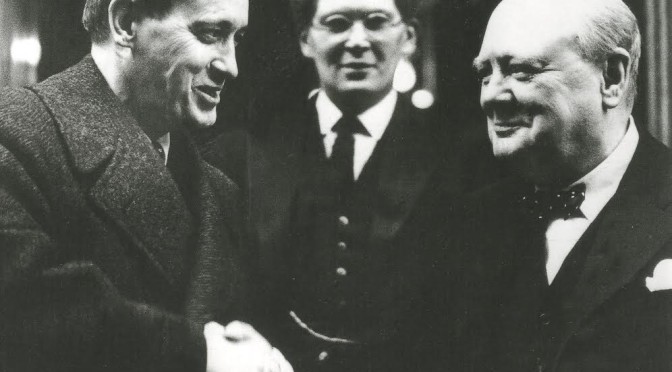 I have made a close study during my Churchill work of the low points and high points of his war leadership. In this article, I have chosen seven, between May and December 1940. The first low point, from the earliest days of Churchill’s premiership in May 1940, was the bleak outlook for Britain as German troops swept through Belgium, Luxembourg, the Netherlands and France, and continued their conquest of Norway. On the third, bleak day of Churchill’s premiership, on May 13, his Military Secretary, General Ismay recalled, “I walked with him from Downing Street to the Admiralty. A number of people waiting outside the private entrance greeted him with cries of ‘Good luck, Winnie. God bless you.’ He was visibly moved, and as soon as we were inside the building, he dissolved into tears. ‘Poor people,’ he said, ‘poor people. They trust me, and I can give them nothing but disaster for quite a long time.’ ”

The high point was the knowledge, not made explicit until 12 January 1941, from decrypted top secret German Enigma signals, that the German invasion of Britain had been called off.

The second low point was the continuing Conservative hostility after Churchill became Prime Minister. His first parliamentary speeches as Prime Minister were heard with much scepticism and silence from the Conservative backbenches. Churchill appealed to Parliament: “I say, let pre-war feuds die; let personal quarrels be forgotten, and let us keep our hatreds for the common enemy…. It has been my deliberate policy to try to rally all the forces for the life and death struggle in which we are plunged, and to let bygones be bygones.”

The high point was Churchill’s speech defending the Royal Navy’s destruction of the French Fleet at Oran, a brutal, necessary act of national self-preservation on the eve of a possible German invasion. At last the Conservatives applauded the action Churchill had taken and recognised, as did the nation, the qualities of his leadership.

My third low point was on the afternoon of 26 May 1940, at a meeting of the War Cabinet in Churchill’s room in the House of Commons, when the Foreign Secretary, Lord Halifax, suggested that, with regard to an Italian offer to mediate between Britain and Germany: “We might get better terms before France went out of the war and our aircraft factories were bombed, than we might get in three months time.” The former Prime Minister, Neville Chamberlain added, as the minutes of the meeting recorded, “that, while we would fight to the end to preserve our independence, we were ready to consider decent terms if such were offered to us.” Churchill believed that this willingness to consider “decent terms” was a misreading of the public mood, but he could not know for certain. At this point in the discussion, however, he had to ask for a break in the War Cabinet meeting – which had already lasted two hours – to meet, for the first time since he had formed his Government sixteen days earlier, the twenty-five members of his administration who were not in the War Cabinet.

That meeting had been arranged several days earlier. No sooner had these twenty-five Ministers come into his room – the War Cabinet having left – than Churchill told them that although Hitler would probably “take Paris and offer terms” he, Churchill, had no doubt whatever “that we must decline anything like this and fight on.” To Churchill’s astonishment, as he spoke the words “fight on” there was a sudden outpouring of support from the twenty-five Ministers assembled there – in the very room where the discussion about a negotiated peace had just taken place. Churchill was overwhelmed by this spontaneous determination for continuing the fight. It gave him added strength half an hour later, at the reconvened War Cabinet meeting, when he told Halifax and Chamberlain that he “did not remember having ever before heard a gathering of persons occupying high places in political life express themselves so emphatically.” All talk of peacemaking was dropped. The high point had come within an hour and a half of the low point.

My fourth low point took place on 11 June 1940, when, the French Government having left Paris, Churchill flew to Braire on the Loire for a meeting of the Anglo-French Supreme War Council. At the start of the two-day meeting, General Weygand insisted that further French resistance was impossible, and Marshal Pétain made it clear that a Franco-German armistice was inevitable.

The high point took place five days later, on June 16. That day, General de Gaulle, still a member of the French administration, came to Britain and gave his authority (on the day that Pétain’s emissaries, at Compiegne were seeking an armistice) whereby all French war material then on its way across the Atlantic from the United States would be diverted to Britain. In addition, all French munitions contracts in the United States (132 in all, including those for 965 bombers) would be transferred to full British control. Whatever disputes Churchill later had with De Gaulle, he never forgot the General’s contribution to Britain’s war effort at that testing time.

My fifth low point was the sinking by German bombers of the Cunard liner turned troopship HMT Lancastria off St Nazaire, on 17 June 1940, with the death of more than 3,000 British soldiers and civilian refugees (Britain’s worst maritime disaster, and one of the worst maritime disasters of the Second World War). It was such a blow that Churchill insisted no mention of it was made in the newspapers.

A maritime high point came swiftly. A day later, on June 18, two French scientists, Lew Kowarski and Hans von Halban, having made their way from Paris on roads crowded with refugees, were taken off safely from Bordeaux by collier, a ten-day sea journey to Southampton, zigzagging to avoid U-boats, bringing with them to Britain the whole supply of Heavy Water then available to Germany, twenty-six cans in all. For Churchill, one of the few who knew this setback to a German nuclear bomb, this was an enormous relief.

My sixth low point took place on 10 November 1940, when Churchill was informed by telephone from Downing Street that Neville Chamberlain had died. He at once wrote a letter in his own hand: “My dear Mrs Neville, I heard the news of Neville’s death and your grievous loss with deep sorrow. During these long violent months of war we had come closer together than at any time in our twenty years of friendly relationship amid the ups and downs of politics. I greatly admired his fortitude and firmness of spirit. I felt when I served under him that he would never give in: and I knew when our positions were reversed that I could count upon the aid of a loyal and unflinching comrade.”

For the so-recently bitterly divided nation, a high point in political reconciliation and national unity was Churchill’s funeral oration, in which he told the House of Commons: “It fell to Neville Chamberlain in one of the supreme crises of the world to be contradicted by events, to be disappointed in his hopes, and to be deceived and cheated by a wicked man. But what were these hopes in which he was disappointed? What were these wishes in which he was frustrated? What was that faith that was abused? They were surely among the most noble and benevolent instincts of the human heart – the love of peace, the toil for peace, the strife for peace, the pursuit of peace, even at great peril and certainly to the utter disdain of popularity or clamour.”

Churchill continued: “Whatever else history may or may not say about these terrible, tremendous years, we can be sure that Neville Chamberlain acted with perfect sincerity according to his lights and strove to the utmost of his capacity and authority, which were powerful, to save the world from the awful, devastating struggle in which we are now engaged.”

My seventh and final low point was Roosevelt’s insistence in the last week of December 1940 on the sale of all British assets in the United States, and the handover of the British gold reserves then at Simonstown in South Africa, before any further arms purchases would be allowed. In near despair, Churchill wrote to the President: “If you were to ‘wash your hands of us’ i.e. give us nothing we cannot pay for with suitable advances, we should certainly not give in, and I believe we could save ourselves and our own National interests for the time being. But we should certainly not be able to beat the Nazi tyranny and gain you the time you require for your re-armament….”

Churchill continued: “It is not fitting that any nation should put itself wholly in the hands of another, least of all a nation which is fighting under increasingly severe conditions for what is proclaimed to be a cause of general concern. If I have some word from you showing us where we stand, and that the United States is going to supply us with the thousands of millions of dollars worth of munitions which we shall need in 1941 and 1942 if Nazi-ism is to be beat, I will gladly give directions for any gold in Cape Town to be put on board any warships you may send…. I feel however that I should not be discharging my responsibilities to the people of the British Empire if, without the slightest indication of how our fate was to be settled in Washington, I were to part with this last reserve, from which alone we might buy a few months’ food.”

Churchill ended his letter: “Whatever happens we shall certainly not give in, and I believe we can save ourselves and our own national interests for the time being. But you will not, I am sure, mind my saying that if you are not able to stand by us in all measures apart from war, we cannot guarantee to beat the Nazi tyranny and gain you the time you require for your rearmament. You may be absolutely sure that whatever you do or do not feel able to do, we shall go on to the utmost limit of our resources and strength. But I gravely fear that that strength unaided will not be sufficient to produce a world result of a satisfactory and lasting character.”

The high point was the visit to Britain ten days later of Roosevelt’s emissary Harry Hopkins, a visit that was the catalyst for the Lend-Lease Bill. On the afternoon of 10 January 1941 Churchill told Hopkins that the text of the Lend-Lease Bill, which he had read that morning, “had made him feel that a new world had come into being.”

Churchill greets Roosevelt’s personal emissary, Harry Hopkins, at 10 Downing Street on 10th January 1941. Between them is Brendan Bracken, who was one of Churchill’s “closest confidants.”