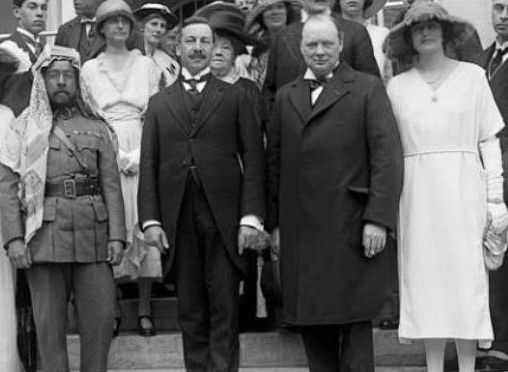 On 8 May 1945 the war in Europe came to an end. Six million Jews had been murdered; hundreds of thousands of pitiful survivors craved to be allowed to go at once to Palestine, and to rebuild their shattered lives in the Jewish National Home – a refuge which had been in existence for more than twenty-five years. But the British restrictions remained in force, and on 14 May Weizmann wrote to Churchill, urging that, with the end of the war, the time had come to abandon these restrictions, and to open Palestine to the remnant of Hitler’s Holocaust. “The White Paper still stands,” Weizmann wrote. “It is prolonging the agony of the Jewish survivors. Will you not say the word which is to right wrongs and set the captives free?”

But Churchill did nothing. “There can, I fear, be no possibility of the question being effectively considered,” he wrote to Weizmann on 9 June 1945, “until the victorious Allies are definitely seated at the Peace table.”

Churchill wrote this letter on 9 June 1945. Seven weeks later, he was no longer Prime Minister, for on 26 July Clement Attlee formed his Labour Government, and Ernest Bevin, the new Foreign Secretary, became the leading figure in Britain”s Palestine policy. All Churchill”s wartime hopes, of supervising a new Middle East settlement, and enabling the Jews to have at last their national home, were set aside.

In opposition, Churchill’s sympathy for the Jews continued to flourish. On 1 August 1946 he told the House of Commons: “I am against preventing Jews from doing anything which other people are allowed to do …. I have the strongest abhorrence of the idea of anti-semitic lines of prejudice.”

Churchill’s sympathy for the Jews was often expressed. Thus, while he was working on his War Memoirs in the South of France, Christopher Soames remarked that British public opinion was pro-Arab and anti-Jew. “Nonsense,” Churchill replied. “I could put the case for the Jews in ten minutes. I will never forgive the Irgun terrorists. But we should never have stopped immigration before the war.”

But, between 1945 and 1948 Churchill, with all the authority of the Leader of the Opposition, brought no motion condemning the Labour Government’s actions in Palestine, or its attitude towards the Exodus and other immigrant ships. The Conservative Party would not support a pro-Zionist policy. Nor could Churchill, with his personal sympathies, persuade them to do so. As Richard Crossman later recalled: “There were only two Zionists in the Shadow Cabinet – Churchill, and Boothby.” Two was not enough: in the 1920s Churchill had fought Conservative hostility to the Jewish National Home with courage and conviction. Now, twenty-five years later, although he had become Leader of the Conservative Party, he was its prisoner.

On 14 May 1948, while Churchill was still Leader of the Opposition, the State of Israel was established. Although the hostility of the Labour Government to Zionist aspirations between 1945 and 1948 had turned many of the new Israeli citizens against Britain, Churchill felt himself a friend of the new State, and looking back across more than 40 years, saw himself as a consistent supporter of the Zionist ideal.

Churchill became Prime Minister for the second time on 26 October 1951. Among those who hastened to congratulate him was Chaim Weizmann – himself now President of the State of Israel. On 19 November 1951 Churchill wrote to Weizmann:

Thank you so much for your letter and good wishes. The wonderful exertions which Israel is making in these times of difficulty are cheering to an old Zionist like me. I trust you may work in with Jordan and the rest of the Moslem world. With true comradeship there will be enough for all.

Every good wish my old friend.

The full story of Churchill’s relationship with the Zionists, especially during the Second World War, has yet to be told. I hope that in these few pages it has been possible to give at least a glimpse of how far he was a genuine sympathiser with Zionist ideals, and yet how little he was able, in moments of grave anxiety to the Jews, to give effect to his feelings.

Sir Martin has written the “full story” Churchill and the Jews