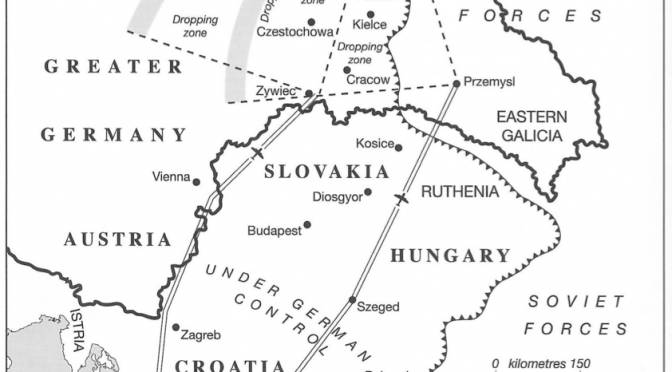 When, in the first week of August, substantial German forces began to attack the insurgents, and Soviet air activity over Warsaw ceased, the insurgents appealed for Allied help.

“At urgent request of Polish Underground Army we are dropping, subject to weather, about sixty tons of equipment and ammunition into the southwest quarter of Warsaw…. They also say that they appeal for Russian aid, which seems to be very near. They are being attacked by one and a half German divisions…..”

Stalin replied at once – what Churchill described as a “prompt and grim” answer:

“I think that the information which has been communicated to you by the Poles is greatly exaggerated and does not inspire confidence. … The Home Army of the Poles consists of a few detachments, which they incorrectly call divisions. They have neither artillery nor aircraft nor tanks. I cannot imagine how such detachments can capture Warsaw, for the defence of which the Germans have produced four tank divisions, among them the Hermann Göring Division.”

Stalin declined to send air support, close though his nearest airfields were.

When [Polish Prime Minister in Exile] Mikołajczyk went to see Churchill, however, Churchill promised immediate action. On the night of August 4, thirteen British aircraft flew the great distance from southern Italy to central Poland, to drop supplies for the insurgents.

Five out of the thirteen failed to return.

On August 8, Churchill received an appeal from Warsaw: “…without immediate support, consisting of drops of arms and ammunition, bombing of objectives held by the enemy, and air landing, our fight will collapse in a few days.”

Churchill telegraphed this message to Stalin, with the plea: “They implore machine guns and ammunition. Can you not give them some further help, as the distance from Italy is so very great?”

To Eden, Churchill telegraphed: “It would only be a flight of 100 miles for them to send in all the necessary quantities of ammunition and machine guns the Poles need for their heroic fight.”

Stalin declined to do so. Nor would he allow Allied aircraft from Italy to refuel at Soviet air bases. In protest, Churchill contemplated halting the convoys taking military supplies to Russia, but Roosevelt would not let him.

Unknown to Churchill, Roosevelt had made a secret deal with Stalin for American warplanes to use Soviet Far Eastern air bases to bomb Japan. Roosevelt did not want to endanger this deal – whose existence he had withheld from Churchill – by calling on Stalin to help Warsaw.

On August 15, twenty-six aircraft were sent from Italy to drop supplies on Warsaw. Eight did not return. That day the British Ambassador in Moscow, “discussed this question with the Russians, whose attitude” – he reported to Churchill – “towards affording assistance to the Poles fighting in Warsaw had been unhelpful”.

On September 30, Churchill made a final appeal to Stalin. “After sixty days of relentless fighting against the common enemy,” he told the Soviet leader, “the defenders of Warsaw have reached the limits of human endurance…. At this extreme hour of need, I appeal to you.”

Not only did Stalin not bother to reply to this appeal, but three days later, on October 2, he cancelled an overflight that he had earlier permitted from Allied air bases in southern Italy to Warsaw and then on to a southern Soviet airbase at Poltava.

Excerpt from a speech Sir Martin delivered at the Jagiellonian University, Cracow, Poland on 17 February 2010 entitled “Churchill and Poland: Friend or Foe?” 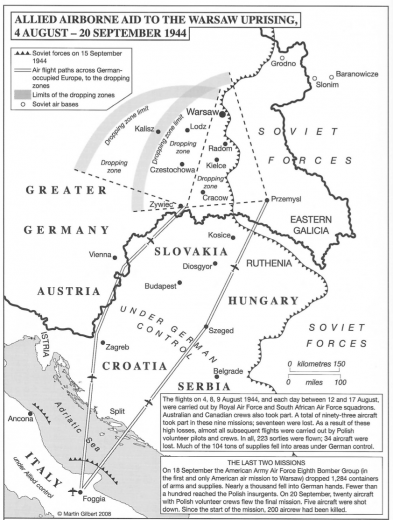