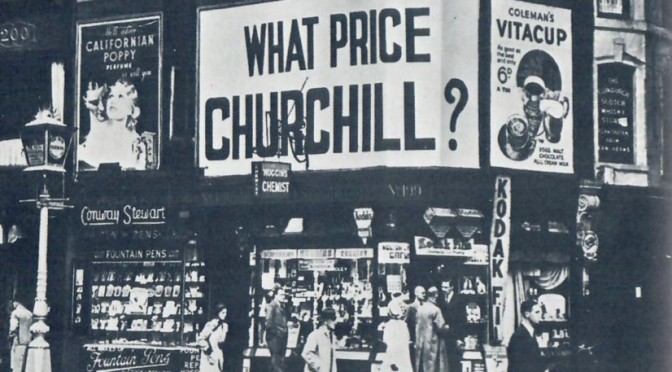 Photo: A poster which appeared in the Strand, London, the last week of July 1939. The Daily Mirror asked: “The writing on the wall? This giant poster is causing considerable comment.” From The Wilderness Years

This anxiety increased considerably as Nazi pressure mounted on the Austrian Government, and Hitler spoke publicly and violently against the forthcoming plebiscite, in which Austrians were to be asked to vote for or against independence. On 12 March 1938, a few days before the plebiscite was to be held, German forces massed on the Austrian border. At that moment Churchill was lunching at 10 Downing Street, as one of Chamberlain’s guests, to say farewell to the German Ambassador, von Ribbentrop, who was about to return to Berlin to become Foreign Minister. During the luncheon Chamberlain received a message reporting that according to the German Government the German troops massing at the Austrian frontier were merely “training”. Churchill recalled the uneasy atmosphere as he and the other guests said goodbye to the guests of honour. Ribbentrop and his wife, however, were completely unruffled and Churchill recalled how “they tarried for nearly half-an-hour engaging their host and hostess in voluble conversation”. As the guests were about to depart, Churchill exchanged some words with Frau Ribbentrop: “in a valedictory vein, I said, ‘I hope England and Germany will preserve their friendship.’ ‘Be careful you don’t spoil it,’ was her graceful rejoinder.”

That same evening German troops crossed into Austria. Clementine Churchill’s cousin, Unity Mitford, an admirer of Hitler, was convinced that every Austrian would rejoice at the Nazi success. Churchill was outraged, telling Unity Mitford that Hitler’s “dastardly outrage” against Austria was the result of the Dictator’s knowledge that a “fair plebiscite” would have gone against the Nazis.

On 14 March 1938 Churchill explained to the House of Commons what he believed to be the results and implications of Hitler’s occupation of Austria. It was essential, he said, for Britain to make its position clear. “Delay” he believed “would be harmful” and he asked: “Why should we assume that time is on our side? I know of nothing to convince me that if the evil forces now at work are suffered to feed upon their successes and upon their victims our task will be easier when we are all united.”

The “gravity” of Hitler’s occupation of Austria, Churchill said, could not be exaggerated. Hitler was confronting Europe with a carefully worked out “programme of aggression” and as this programme unfolded the only choice was either to “submit” as Austria had done, or to take effective measures to make resistance possible. Churchill warned that resistance would be hard, but he continued: “I am persuaded – and the Prime Minister’s speech confirms me – that it is to this conclusion of resistance to overweening encroachment that His Majesty’s Government will come, and the House of Commons will certainly sustain them in playing a great part in the effort to preserve the freedom of the nations of Europe.” If Britain delayed, Churchill warned, the situation would become even more difficult. “How many friends would be alienated,” he asked, “how many potential allies should we see go, one by one, down the grisly gulf, how many times would bluff succeed, until behind bluff ever-gathering forces had accumulated reality?”

Churchill went on to warn the House of Commons that in two years time the German army would be stronger than that of the French and “all the small nations will have fled from the League of Nations to try to come to terms with the Nazis.” People were concerned about the tragedy of Austria and the persecution of its people but, Churchill warned, the Anschluss has even wider ramifications. Vienna was the centre of Eastern Europe communications and, together with the Danube, gave Nazi Germany military and economic control of all Eastern Europe. The Little Entente – Romania with its oil, Yugoslavia with its minerals and Czechoslovakia with its munitions – together with their combined armies had hitherto been a formidable power. Now, however, Czechoslovakia was isolated, and a “wedge” had been driven into the heart of the Little Entente. For this reason, Churchill warned: “We cannot say ‘the past is the past’ without surrendering the future.”

From The Wilderness Years