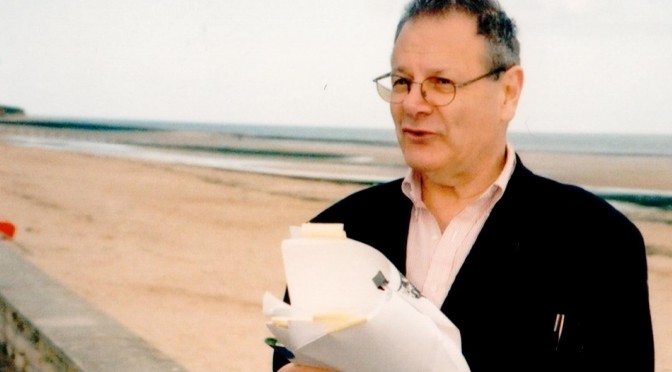 Photo: Sir Martin on the beach at Normandy, describing the invasion, May 2003.

Photo © Bernie Pucker, with thanks to Liz Burgess.

The Allied landing in 1944 might have ended in disaster. Winston Churchill thought he would be woken up to be told of massive casualties. General Eisenhower prepared a short, solemn broadcast announcing that the enterprise had failed.

D-Day in military parlance is the starting “day” of any offensive. In 1943 there had been both a Sicily D-Day and an Italy D-Day before the cross-Channel assault. But because the Normandy landings on 6 June 1944 marked so significant a turning point in the Second World War, the term “D-Day” has come to signify that day alone. My aim in these pages is to show how that turning point in history came about. The period of preparation, lasting almost two years – amid the strains and uncertainties of war elsewhere – was one of inventiveness, hard work, experimentation, secrecy, and wide ranging deception plans.

This was no chance or accidental turning point, but a calculated, planned, evolving, intricate struggle to ensure the overthrow of a tyrannical regime, and to liberate those who had suffered under its harsh rule for four years. It was a struggle that involved men and women in offices and factories, in training camps and clandestine venues – almost none of them knowing the specific destination – working as a vast team to put together a comprehensive plan that would ensure the destruction of Hitler and his regime and the liberation of the captive peoples of Europe.

The turning point of 6 June 1944 owed its evolution and impact to many individuals and groups of individuals. Among them were the two statesmen, the British Prime Minister Winston Churchill and the American President Franklin D. Roosevelt, whose joint vision it was, despite disagreements and hesitations along the way; to General George C. Marshall and General Sir Alan Brooke, the respective heads of the vast American and British military organizations, who worked for it at the highest level of strategic planning; to General Dwight D. Eisenhower and General Bernard Montgomery, the American Supreme Commander and the British Commander-in-Chief, respectively, who had to carry out the strategy and work together in tandem. There were also the two staffs of both these commanders, men and women who had to coordinate a hundred different enterprises, and to the special organizations within those staffs, working to devise a successful amphibious landing on a scale never before attempted.

Others without whom the whole vast enterprise could not have been launched were the intelligence chiefs who masterminded the sending of Allied agents into Europe, and who controlled the double agents in Britain through whom the essential deception plans were promoted. Then there were the factory workers and engineers and builders and technicians and inventors who made the wide array of equipment needed. Much was also owed to the pilots and aircrews who were in action long before D-Day, on the day itself, and after it, helping to ensure success; to the sailors who cleared the seas and transported the invasion force and kept it supplied; and above all to the soldiers of all Allied armies, all ranks, and all branches of the armed services, who trained for action, and then went into action on the beaches and landing grounds of Normandy, and then fought their way across the Continent. It was a collective effort on an unprecedented scale. Without that effort the turning point would have been impossible.

An excerpt from the Preface D-Day ©Martin Gilbert