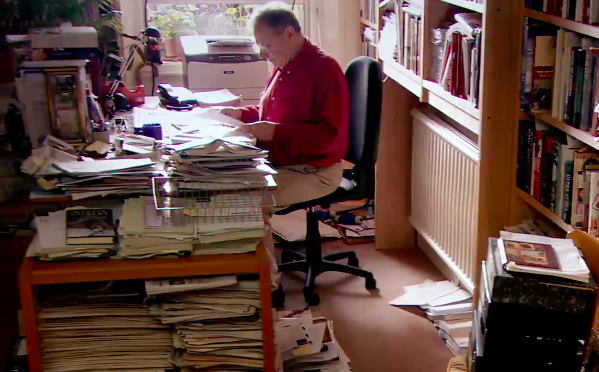 Photo: Martin at his desk, March 2009, from the film The Rescuers

From my first days as Churchill’s biographer in 1968 I began to receive letters from people who wanted to tap my imagined expertise.  Sometimes I get as many as a dozen such letters a week.  Most people want me to confirm a Churchill story or to verify a quotation.  This, though seemingly simple, can take hours, even if it can be done at all.  Auction houses seek confirmation that a Churchill signature being offered for sale is genuine (it is surprising how often it is not).  Many of those who write to me hope that I may be able to date a photograph, or to identify the people who appear on either side of Churchill.  Some want to know if Churchill stayed at their homes, or had some connection with their region or their professional work, with a view to putting up a plaque.

Every facet of Churchill’s life, from the most profound to the most bizarre, has crossed my desk in the form of queries.  The most frequent are about his cigars, his brandy and his cats.

A few of those who wrote to me claimed to be Churchill’s illegitimate children.  Several others asked me to confirm that Brendan Bracken, his friend and wartime Minister of Information, was such a child.  In no case did illegitimacy seem at all possible, despite the uncertainty of paternity.  I was able to give a decisive reply to the woman who said that Churchill and her mother had had an illicit liaison (Churchill had then been a married man for seven years) on board a troopship in the eastern Mediterranean in the summer of 1915, nine months before her birth.  Throughout that summer Churchill had been in London and, at weekends, at Hoe Farm near Godalming, in Surrey.

The desire to have some link with Churchill in distant lands was a regular feature of enquiries.  When I was in the Crimea in 1989, I was offered a trip to “the grave of Churchill’s father”, killed in action, it seems, during the Battle of Balaclava in 1854, twenty years before Churchill’s birth, and buried within sight of the Black Sea.  In fact, Lord Randolph had died in London in 1895, and was buried at Bladon, within sight of the towers of Blenheim Palace.  Also in 1989, as the Soviet Union turned from communism to glasnost, the Lvov Medical Institute, a branch of the Ukrainian Ministry of Health, asked the British Embassy in Moscow to confirm that Churchill had gone to the Carpathian spa town of Skole in the 1930s “with the aim of restoring his health”.  A new medical centre was being developed there; no doubt the institute had hoped to put up a plaque:  “Britain’s war leader took the waters here,” a good advertisement in the changing times.  But there was no evidence that Churchill had gone anywhere in Europe east of Munich in the 1930s, let alone into deepest then-Polish Galicia.

In 1985 I was approached by the Attorney-General’s office of Alberta, Canada.  The province was seeking to put on trial a teacher who, in denouncing the malign influence of the Jews, had quoted Churchill as an authority.  The quotation he used was well known to me, and as it was also taken out of context, I was able to provide the court with the full quotation, and an explanation of Churchill’s views.

As cited by the teacher, Churchill had denounced the Bolshevik Jews controlling the Soviet regime in 1920, and had likened them to a worldwide “sinister conspiracy” of Jews who worked to undermine democracy.  Churchill’s actual article, published in the Illustrated Sunday Herald of 8 February 1920, had set out his thoughts on three very different types of Jewish involvement in national life:  the Bolshevik involvement, which he abhorred; the assimilationists, of whom he approved; and the Zionists, about whom he wrote with both fervour and prescience:  “If, as may happen, there should be created in our lifetime, by the banks of the Jordan, a Jewish state under the protection of the British crown, which might comprise three or four millions of Jews, an event would have occurred in the history of the world which would, from every point of view, be beneficial.”  This was written in 1930.  In 1992 the Jewish population of the State of Israel reached four million.

The queries of readers, fellow historians, other writers and even schoolchildren stimulate the search and keep the focus sharp.  Churchill will always be the object of curiosity and controversy.  To every enquiry there is an answer and to every controversy there is a truth.  It is the search for truth that has made the quest so exhilarating.  I suppose that letters will keep reaching me long after my Churchill pen is laid to rest.  I shall certainly not complain if this is so.

An excerpt from In Search of Churchill

Read:  In Search of Churchill